Go ahead and laugh, all you Nessie naysayers and Loch Ness monster non-believers -- you’ll never be the subject of a Ridley Scott film like Steve Feltham, the man who holds the record for the longest, continuous full-time search for the elusive Scottish cryptid. Feeling a little sheepish now?

“This is the next best thing to seeing Nessie.”

When you consider that Steve Feltham has been trying to see Nessie every day since 1991, it’s obviously a HUGE deal for him to have been approached by RSA Films, a company formed in 1968 by filmmaking brothers Ridley and the late Tony Scott for making commercials, music videos, features and television programs. While RSA doesn’t plan to turn Feldman’s Loch Ness story into another dystopian blockbuster (Glade Runner?), it was still exciting when Alexander Farrell of RSA contacted him about starring in a seven-minute commercial Farrell was working on for the computer hard drive companies Lacie and Seagate.

“Steve represents the imagination of all of us – he’s inspirational, he’s Indiana Jones.”

Raiders of the Loch Shark? Actually, The Press & Journal reports that Farrell was looking for an Indiana Jones-type of person to do some rock-climbing, downhill cycling and other extreme activities in and around Loch Ness (photos of him in action here) – especially someone who could do those things despite no longer being a young adventurer. In other words, a Harrison Ford type of Dr. Jones,

“He has more tenacity and passion than all of us put together. I have fallen in love with Steve Feltham and this is just the beginning.” 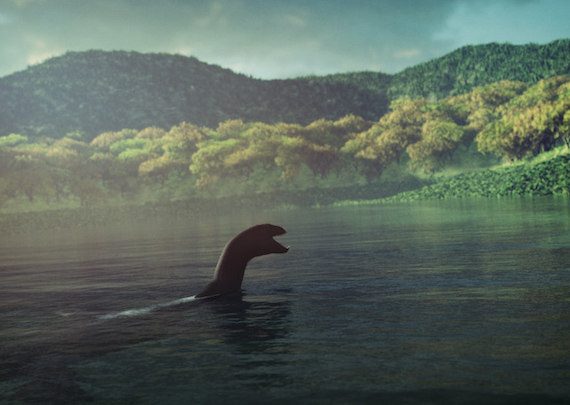 After seeing Feltham and hearing his story, Farrell decided to do a film about him. While Steve won’t be playing himself (Harrison Ford? Daniel Craig? Gary Oldman? Sean Penn?), he will have a small role in the movie. Farrell is writing the script himself, so Feltham can keep his day job.

Let's hope Farrell doesn't find out what Feltham said a few years ago -- that he thought Nessie might just be a giant catfish -- a monstrous one but not a dinosaur. The only event that could change things would be if he found Nessie while waiting. Would Ridley Scott step in to make this another dystopian (at least for Nessie) blockbuster? Hello, Harrison?

Bedroom Encounters With Something Terrifying