Practically anyone and everyone fascinated by the world of the strange will have heard of the Mothman: that monstrous, winged entity said to haunt the town of Point Pleasant, West Virginia, and whose dark and disturbing exploits were most famously recounted in John Keel’s book, The Mothman Prophecies. How many people, however, are aware of the fact that the U.K. is home to a veritable menagerie of creatures that eerily parallel the United States’ most famous winged-thing? If you aren't aware of the U.K.'s equivalents, it's time to be enlightened.

The night of November 16, 1963 was a cold, clear and moonlit one. Seventeen-year-old John Flaxton, Mervyn Hutchinson, who was a year older, and two other friends, were strolling along an old country road that ran adjacent to the tree-shrouded Sandling Park, Hythe, in the green and picturesque county of Kent, England. The four were laughing and joking as they headed home after an evening spent at a local dance, when quite out of the blue something strange caught their attention: namely a bright, “star-like” object flying low in the sky that seemed to head ominously in their direction. All four watched amazed as the object suddenly changed direction, and dropped to the ground behind a thick area of trees. It was then that matters took a very strange turn.

Flaxton would later recall that a feeling of dread overcame the group, and that his body temperature noticeably dropped. No wonder, given the fact that as they scanned the area, the object quickly loomed back into view from behind the trees; it could now be seen as “golden [and] oval-shaped,” and proceeded to follow the four from a distance of around 200 feet. Needless to say, the terrified teenagers broke into a run and fled the scene. To their relief, they finally seemed to lose the object and it vanished from view. But worse things were to come, however; much worse.

Without warning, out of the trees emerged something else; something far more terrifying: namely a tall, dark, winged figure that the teenagers could only describe as looking like a human-sized bat. When it appeared to notice them and then headed in their direction in a determined fashion, Flaxton and his friends once again fled the scene.

But high-strangeness at Sandling Park continued: over the course of the next few days, yet more strange lights were seen hovering over the trees; giant footprints – two feet long and an inch deep – were found; and even local journalists reported sightings of anomalous lights. Then, as quickly as the high-strangeness had begun, it was all over. The Bat-Man of Hythe vanished as mysteriously as he had appeared. 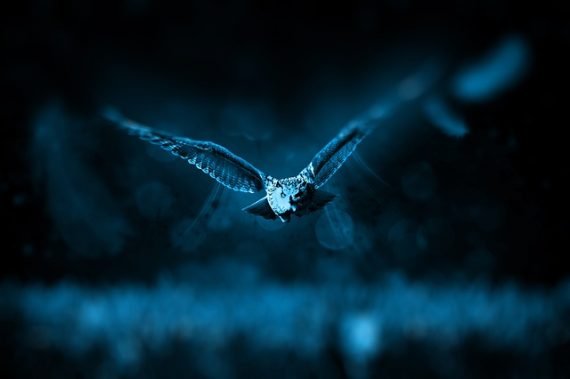 It was in the summer of 1976 that the thick woods surrounding Mawnan Old Church, Cornwall, became a beacon of activity for a bizarre creature that became known as the Owlman. Most of the witnesses described the beast as being near-human in size, that it possessed a pair of large, feathery wings, glowing red eyes, claw-like appendages, and that it seemed to exude a dark and brooding air of menace. One of the witnesses to the creature, Jane Greenwood, wrote thus to the local newspaper, the Falmouth Packet during that same summer: “I am on holiday in Cornwall with my sister and our mother. I, too, have seen a big bird-thing. It was Sunday morning, and the place was in the trees near Mawnan Church, above the rocky beach. It was in the trees standing like a full-grown man, but the legs bent backwards like a bird’s. It saw us, and quickly jumped up and rose straight up through the trees. How could it rise up like that?”

It was questions such as this, and witnesses such as Jane Greenwood, that led British-based monster hunter Jonathan Downes to spend much of the 1990s investigating the affair – the extraordinary details of which were published in his groundbreaking book, The Owlman and Others. Downes is convinced that the Owlman is a paranormal entity, rather than anything physical, such as a large type of owl. Moreover, Downes was plagued by bad-luck, misfortune, and “psychic backlash” every time he immersed himself in the puzzle. Today, he has completely washed his hands of the subject and vows never to return to those dark woods.

Known as “the backbone of England,” the Pennines is a mountain range that extends for almost 250 miles, and has for centuries been the setting for countless paranormal activity – including, in the late 1970s, sightings of nothing less than a giant, winged pterosaur. The strange story dates back to 1978, when British science-fiction author Ian Watson’s novel, Miracle Visitors, was published. The book told the story of a teenage boy in the county of Yorkshire who possessed remarkable skills that allowed him to project from the depths of his mind – and into the physical world – images of “pseudo-real creatures;” or “mind-monsters,” as British UFO researcher Jenny Randles calls them. One of those mind-monsters that Watson’s character creates is that of a prehistoric pterodactyl.

Coincidentally, during the time that Ian Watson was still writing his novel, a young man named Paul Bennett, who lived in the county of Yorkshire, and who had had a lifetime of weird experiences that ranged from sightings of hairy creatures to angels and aliens, encountered a pterosaur of precisely the type that would surface only months later within the pages of Miracle Visitors. It's an affair that Jenny Randles has investigated extensively.

On March 15, 1985 the Ealing Gazette newspaper published an eye-catching story titled Flight of the Phoenix. The subject: a large, winged beast that had supposedly been seen flying over the Brentford area of West London. As the newspaper stated: “Is it a bird…? Or is it a plane…? No, but it could be a Griffin! The bizarre giant bird has been seen several times – and some people believe it could be the legendary half-eagle, half-lion returning to the area where it has forged many historic links.”

The Gazette cited the testimony of local man Kevin Chippendale, who said: “I saw it twice in the same place about 30 feet up by the Green Dragon flats. The shape of the bird is what attracted me in the first place. When I first saw it I thought it was an airplane. It had a very definite shape.” And, in the weeks that followed, other reports of giant, winged beasts soaring through the skies of Brentford surfaced; Griffin mania quickly gripped the area.

Author Andrew Collins soon penned a small booklet on the affair that took a welcome, unbiased approach to the controversy, and revealed that while some of the stories had to be taken with a large pinch of salt, others remained intriguing and puzzling, and had more than an air of the paranormal about them. Indeed, much space was give to a discussion of the sighting of the aforementioned Kevin Chippendale, who told Collins that the creature he had seen was “the size of a large dog…it had four legs and what appeared to be paws. There was no beak…its skin surface seemed smooth, not feathery, and it did look aerodynamic. The wings did not seem to be flapping like those of a normal bird in flight. They were much slower, almost as if they were moving in slow motion.”

It was around 9.30 p.m. on Monday, March 8, 2004, and Steve Nicklin and a friend were “walking across Northicote Farm” when, as they approached an old Tudor-era farmhouse they were shocked to the core by the sight of a diabolical creature that was perched within the branches of a nearby, large pine tree. According to Nicklin, the creature was humanoid in shape, “grayish” in color, and around seven feet in height. But there was more, said Nicklin: “It had two legs and two arms connected to membrane-type wings. Its clawed arms seemed connected to these wings; a bit like a pterosaur.”

Nicklin continued: “It moved its head and looked directly at us, since the moon was full and there were street lights not far away. It turned its head from us, took one giant leap and glided to the next tree. The tree bent under this creature’s weight as it took the impact. It then turned its head to look at us once more. Its gaze felt that it could look into our very being. We both felt quite scared. We both fled quickly. We sat down and discussed what we had seen. It was a creature the like of which we had never seen before, nor want to ever see again.”

Doubtless, all of those that have experienced the weird, winged things of Britain can relate to Steve Nicklin’s final words…