At this point, it seems obvious that it’s become a question of when a war in space will break out, not if. The U.S. Military has been preparing for Space War I for some time now, and the world’s other superpowers aren’t too far behind - or maybe they’re even a step ahead. Observers have noted that many Russian spacecraft and satellites have begun behaving in unknown and unprecedented ways lately, and China’s People's Liberation Army Air Force has been spotted testing unknown low-orbit hypersonic aircraft. Where’s the Space Force when you need it? 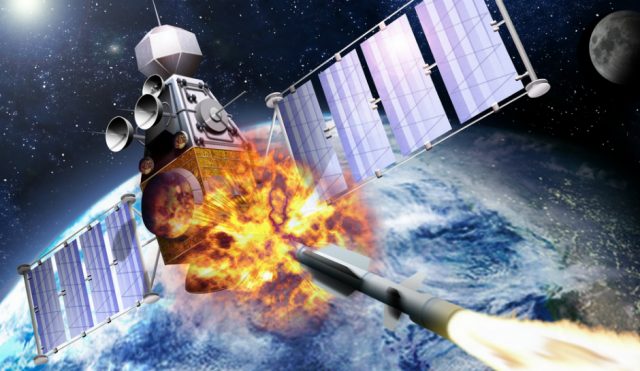 To add more fuel to the apparent space war brewing, an unidentified new weapon was recently seen being tested by a MiG-31 aircraft at Zhukovsky Airport outside of Moscow, Russia’s base for testing new aircraft and weapons. In his analysis over at The War Zone, aviation sleuth Tyler Rogoway writes that the weapon appears to be either a hypersonic missile similar to the ones tested in China recently, or an air-to-space rocket designed to blow satellites to orbital smithereens.

The weapon, whatever it is, is labeled “81 Blue” and is nearly the size of the MiG carrying it. There are few details to go on yet, but the weapon appears to be similar to other anti-satellite (ASAT) weapons. Such air-to-space ASAT rockets have been tested by the U.S. Air Force as early as the 1980s, and with so much recent attention paid to the oncoming satellite wars, there’s no telling for what the rocket could be intended.

If all of the attention paid to satellites and space supremacy hints at anything, it’s that war in space is coming. Soon. Could all of this recent development and testing of space weapons be related to the recent spate of mysterious booms heard round the world? At this point, I’d be amazed if it wasn’t. Just put those booms alongside other recent developments: increased sightings of fireballs in the sky; unexplained booms rattling the ground; "killer" satellites waking up and acting erratically; the United States creating a Space Force; China and Russia testing new space weapons.

It’s only a matter of time before fiery debris starts raining down around us.

Large Hadron Collider Could Cause Earth to Suffer Severe Shrinkage