It sometimes seems that there is no shortage of local legends and haunted places in this strange world of ours. Wherever one goes one is bound to come across those places that are steeped in tales of the weird and imbued with some ghostly energy. Be it because of their creepy ambiance, their grim histories, or a reputation for death, these places are ground zero for all manner of strange tales, and one such location lies in the East Bay Area of California, near the city of San Franciso. Here is a dark, mysterious labyrinth of tunnels and a spooky cemetery that have long been said to be the haunt of spectral entities, and are among the most haunted places in the state.

Sprawled out over around 6,000 acres north of Mount Diablo in Contra Costa County, California is a place called the Black Diamond Mines Regional Preserve, which encompasses the remains of once thriving mining towns from back in the days of the coal boom the area underwent from between the years of 1850 to 1906, including the remnants of the towns of Nortonville, Somersville, Stewartsville, West Hartley and Judsonville. It was during this era that what was known as the Mt. Diablo Coalfield, the largest in California, saw a surge of settlers arriving to the area, mining towns began to crop up all over the region, and there was a boom of financial success to be had from pulling the “black diamond” from the earth. In its heyday there was a sprawling network of more than 200 miles of tunnels fanning out under the earth here, from which shipments of coal were sent out all over the state, and a total of around 300 million tons of coal would eventually be pulled up from these mines over the years.

Unfortunately, there was also a dark underbelly to all of this. It might not be entirely surprising, but in the rush to mine out as much of the precious coal as possible, safety regulations sort of took a backseat to profits, that is they didn’t really exist. Cave-ins, black lung disease, carbon dioxide poisoning, harsh working conditions, all of these took their toll in miner’s lives, and many of the bodies remained down there in those dark depths forever more. This would go on until the mines eventually were shut down in the face of the the increase in imported coal and other energy sources such as petroleum, and the mines were shuttered. The region became a graveyard of ghost towns, and mostly was used for cattle grazing until sand and silica mines became popular and breathed some new life into the dying area. However, this would only last until around the 1940s until the mines were all closed for good, and the area became a dried up corpse of another, more prosperous time.

In later years, it would turn out that in addition to the deaths of all of those miners, there was also a steady death toll in those residents who had died in plagues of smallpox, scarlet fever and typhoid fever during the era, including many women and children. Many of these victims of disease, and indeed the corpses of miners themselves, ended up at the historic Rose Hill Cemetery, located on a lonely hillside between the Somersville and Nortonville townsites, east of Concord and south of Antioch, California. With the disintegration of the mining industry and the mass exodus of people from the area at the end of the boom years, the cemetery fell into disrepair and became a wild, feral place full of weeds, underbrush, and damaged, vandalized graves, with others originally holding just simple wood markers that have rotted away over the decades, to the point where it is no longer certain even how many people were interred here or who they are, and making this all even worse is that all official records were destroyed in a fire in the aftermath of the 1906 San Francisco Earthquake. You see where this is going, right?

With such a dark history of mining accidents, disease, and death, as well as the defiled and forgotten graves, it should come as no surprise that the Black Diamond Mines and Rose Hill Cemetery have long been considered to be intensely haunted. One of the most famous tales of a haunting revolves around a woman by the name of Sarah Norton, who was a skilled midwife and was also married to the government agent, museum founder, California Gold Rush prospector, and founder of Nortonville, Noah Norton. On October 5, 1879, Sarah was riding in a horse-drawn buggy on her way to a midwife call when the horse pulling her got spooked and bolted, which tossed her from the carriage, killing her. Although Sarah was not a religious woman, and had specifically expressed her will never to never be given a funeral, one was arranged for her anyway, and this is where things get weird.

According to most accounts, Sarah’s death and coming funeral would be plagued with strange phenomena. It started when her body was being moved to the nearby church, when there was allegedly an incredibly fierce storm that came up out of nowhere, disrupting the procession and indeed causing the planned funeral to be called off. This odd storm would pass and funeral arrangements carried out again, but on the day that this was supposed to transpire there was purportedly another violent storm that surged up out of nowhere to dash their plans and send people scattering home. When this happened yet again the very next day, it was decided to just have Sarah buried unceremoniously in the Rose Hill Cemetery, and this was done without incident. Ever since her burial, the ghostly apparition of Sarah Norton has been said to be very active at the cemetery, where she typically appears dressed in flowing white and hovers over the ground surrounded by an eerie glow, earning her the nicknames “White Witch,” “The Glowing Woman,” and “The Gliding Woman,” and she is known to conjure up ferocious winds when she appears.

Interestingly, the area has another “White Witch,” who was in life a woman known only as “Mary.” In the 1870s, Mary was apparently a nanny responsible for a number of children, yet many of her charges had the habit of falling ill and dying. Whether Mary had any hand in this at all or not, it doesn’t matter, as the town certainly thought that she did. Mary was labeled as a witch, and was subsequently hanged and her home burned to the ground. Mary’s spirit also apparently appears as a woman in white, and is said to guard the mines and usher about the souls of the children who died in her care. This spirit seems to be a bit aggressive, in that she almost seems to willfully try to frighten people away, and to discourage anyone from entering the mines. 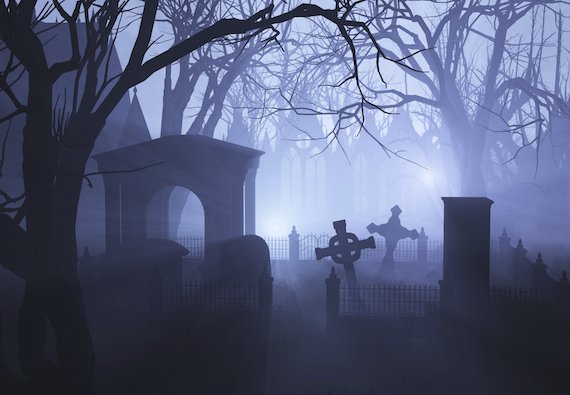 There are various other instances of ghostly phenomena reported from both the Rose Hill Cemetery and the actual nearby mines as well. The mines, although access in recent times is limited, are known to spew forth anomalous groans, voices, and even screaming, and shadow-like figures are said to roam about. The sounds of digging and of shovels scarping against earth are also common, despite the fact that the mines have been out of operation for decades. There is also a spectral horse drawn carriage said to careen about the area of the Rose Hill Cemetery, floating glowing crosses, and a myriad of strange occurrences such as the apparitions of ghostly children and the sounds of laughter, disembodied voices, and other strange noises. The mines and the area around them have been a wellspring of such scary tales for years, and it shows no signs of stopping.

The Black Diamond Mines of California are yet another one of those locations in the world steeped with a dark and turbulent past which happen to have various stories of ghostly phenomena. It is enough to make one wonder just whether this past and the death inextricably linked to it has anything to do with it all, and if these spirits are tethered to this location by some force we cannot comprehend, or if this is all just spooky folklore swirling around an undeniably creepy locale. Whatever the case may be, the mines are still open to some degree, and ghost walks through the area are common, so if you are ever in the East Bay Area of California and feel a little brave maybe you can try it and see for yourself if there is anything to it all. Maybe as you peer into the darkness the White Witches will be peering right back.

Rock Used as Doorstop For 30 Years Turns Turns Out To Be Meteorite Worth $100,000