Mysterious ancient peoples seem to have had the habit of leaving behind baffling puzzles in the form of inexplicable, often indecipherable artifacts that serve to be simultaneously both alluring and baffling, and one such discovery has long lurked in the country of Costa Rico. From the late 1920s, a vast area of thick, nearly impenetrable rain forest in the Diquís Valley of Costa Rica was found to have the perfect soil composition for growing an array of different fruit. Considered to be more or less an agricultural gold mine, the United Fruit Company began moving into this uncharted wilderness in order to clear it to make way for banana plantations, but in addition to the hardships of the land itself, disease, and the thick clouds of mosquitos, they found something else out there in the jungle, something that has gone on to become one of the world’s great archeological mysteries.

In the 1930s, workers clearing the land in the valley began coming across something that they struggled to make sense of. There standing amongst the trees and underbrush were found myriad large stones, with some truly massive at up to 7 feet across and weighing around 16 tons. The strange thing was that these were no mere rocks and boulders, but were rather perfectly, or nearly perfectly formed spheres, totally smooth to the touch, and they had obviously been there for a very long time, ancient monoliths from a long forgotten time that were obviously artificial. There were also a lot of them, with around 300 found scattered about the landscape over the years.

Most would have thought of this as a major discovery, but although the workers were without a doubt baffled and awestruck, they nevertheless were not there on an archeological expedition, they were there to clear land for fruit plantation and these strange relics were getting in their way. The workers went about simply moving them out of the way with heavy work equipment and by hand, and some even thought that they perhaps had gold in them, blasting them open by drill and dynamite. This obviously damaged the spheres immensely, and by the time word got out about these magnificent ancient treasures and authorities could move in, many of the spheres were irreparably damaged or even completely destroyed, and still more of them sold off to become lawn ornaments for wealthy curiosity seekers all over the country before serious study could be carried out on them. 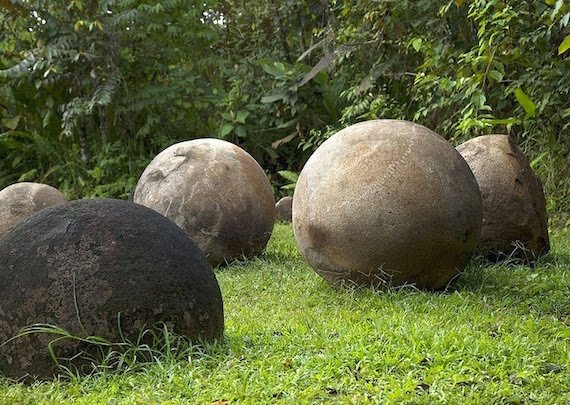 The first serious study done on the mysterious stone spheres was carried out in the 1940s by the researcher Doris Stone, who was actually the daughter of one of the executives of the United Fruit Company and future director of Costa Rica's National Museum. Stone’s findings were then published in 1943 in the esteemed archeological journal American Antiquity, and this caught the attention of other researchers. One of these was Samuel Lothrop, of the Peabody Museum at Harvard University, who went about a major excavation and study of the remaining spheres, carefully measuring them and mapping their positions and alignments.

Other expeditions and studies have sporadically been carried out over the years, but the spheres largely remain as mysterious as they ever were. We know their size, that they are comprised of an indigenous hard stone known as granodiorite, and we also know that they are definitely artificial. Other than that there has been much speculation and debate as to how old they are, how they were made, and who made them and for what purpose. Presenting a serious hurdle to answering any of these questions and indeed spawning further questions that could have otherwise perhaps been answered is also the fact that virtually none of the spheres remain in their original positions or alignments, with some of them completely gone, whisked far away to serve as landscape decorations, and many that do remain suffer major damage. The spheres have been rolled away or down ravines, and others have been severely damaged or destroyed by being moved, treasure hunters blowing them up, or brush by burning, which warps, chars, and cracks the otherwise smooth surface of the stones.

As to the age of the spheres, they were originally described as being truly ancient, up to 12,000 years old, but this has since been doubted. It is difficult to use radiocarbon dating methods on solid stone, so the most reliable way of guessing their age is to compare them to the pottery and other artifacts that lie within the same strata, but since many of the stones have since been moved from their original positions even this is not totally reliable. Although it is not known for sure just how old they are, based on the artifacts around and under them, the spheres have been guessed as probably dating back to between 600 and 1500 AD, but by who is also a mystery, as is how they managed to do it with the primitive tools at hand. 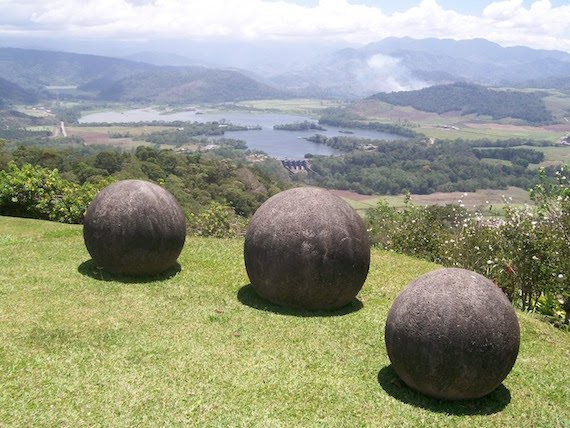 It has been speculated that these spheres were likely created by the ancestors of the native Boruca, Téribe, and Guaymí peoples of the area, although this is not known for sure, and there is also the idea that a lost, unknown civilization was perhaps responsible. The methods used to make the spherical boulders are also rather shrouded in mystery, as granodiorite is a very hard rock that is notoriously hard to carve, but there are some clues. Although a good number of the spheres are almost completely smooth, some of them display marks from tools that present hints to how they might have been crafted. It is thought that the people who made them would have chosen boulders that were already somewhat rounded to begin with, likely quarried from the bed of the Térraba River or the nearby Talamanca mountains, after which the heavy rocks were laboriously transported and work would begin.

There have been some ideas that the natives who made them had access to some sort of lost method such as the use of a stone softening potion of some sort, but there is little evidence to support this. The spheres are thought to have been more likely meticulously shaped through a combination of controlled fracturing, in which cracks are intentionally made, grinding, chipping, and pecking with some sort of sturdy, tool made of a similarly hard substance, possibly made of the same kind of rock as the spheres themselves. Interestingly, the outer layers of the mysterious spheres have shown evidence that they were subjected to extremes of hot and cold, likely in order to smooth them out by flaking off bits, with the heat provided by hot coals. When the boulders finally approached a suitably spherical shape, undoubtedly a labor-intensive process that would have taken large amounts of time, they would then be painstakingly polished to a fine smoothness by using materials such as rough leather or even sand. This is the commonly accepted method for the manufacture of the spheres, but it is not certain as no unfinished spheres have ever been found, and so we don't really know for sure.

So we have sort of a plausible, albeit still uncertain, idea of who made the spheres, how, and when, but even then we are left with the why. Why did these ancient people go through all of the effort of shaping these massive boulders only to leave them scattered about the landscape? What were these enigmatic artifacts actually used for? No one really knows for sure, as there are absolutely no records of them by whoever made them, but there are theories. One is that the arrangement and alignment of the spheres, or at least the estimated positions and alignments of them, in relation to the ruins of walls, structures, and cobbles around them, suggest they may have served as some form of tool for navigation, astronomical observations, or even as a compass. The problem is, as has been mentioned, almost none of the spheres are in their original positions, making this all pure speculation. Another idea is that, because some of them have been found within what would have once been a structure or atop mounds, they may have held some religious significance or been used as status symbols. In the end, it is just as unclear as to why they were made as it is who made them and how. We just don’t know. 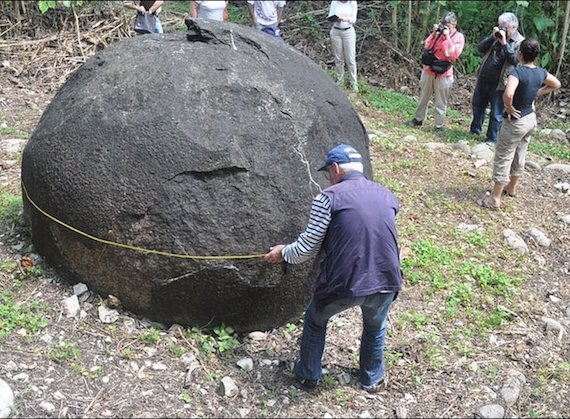 Of course with such an alluring mystery there have been more fringe theories presented for the mystery spheres, such as that they were brought from Atlantis or built by refugees from the legendary lost continent, and this theory was most notably proposed in the books Atlantis in America- Navigators of the Ancient World, by Ivar Zapp and George Erikson (1998), and The Atlantis Blueprint: Unlocking the Ancient Mysteries of a Long-Lost Civilization, by Colin Wilson and Rand Flem-Ath (2001). Another idea is that the people who built the spheres had the help of ancient aliens, who used their technology to make the objects, and that the spheres somehow align with similar monuments in far-flung places such as the Moai of Easter Island, Stonehenge, and even the pyramids.

In the end these strange enormous spheres have remained largely as much of a mystery as they always have been, inscrutable monoliths of another lost time and people. Presently most of the intact spheres can be found in various locations throughout the country and in museums all over the world, but being unleashed from their original jungle lair has done little to truly illuminate their origins, with their enigmas in a sense still firmly out in those wilds along with their lone remaining brethren. For now, the mysterious stone spheres offer only fleeting hints as to the meaning of their existence, and it is likely the only ones who will ever know the true answers are the ones who made them.

Men Paint Their Nails to Avoid Being Killed by a Ghost