The Mystery of Witches’ Marks

We live now in an age of reason, where for the most part magic and witchcraft don’t exist anymore, and where everything has a rational, scientific explanation. Long gone are the days when our ancestors looked to the heavens with awe at the sight and sound of thunder and lightning, or attributed the unexplained to demons, magic, warlocks, and monsters. Yet it was not always this way, and there was a time when these things were a matter of course, an age where anything seemed possible and where witches, warlocks, and all manner of supernatural beings roamed the land in the dark of night. In the face of these insidious supernatural forces, humans across cultures and through geological boundaries have long sought to keep the forces of darkness at bay, and there is indeed a whole category of magic devoted to this in the form of markings, charms, and amulets meant to ward off the encroaching forces of magic and mayhem.

Called apotropaic magic, from ancient Greek word apotrepein, meaning "to ward off,” literally apo- "away" and trepein "to turn,” this type of magic has for centuries been used to deter evil spirits, witches, demons, curses, and the evil eye. Many ancient cultures displayed such practices, with the Egyptians performing various rituals to this effect, in which they invoked the power of their gods to protect them, and this power was often etched into objects such as charms, amulets, and talismans. In ancient Greece the image of the snake-headed Gorgon, whose image was said to deflect evil spirits, and a pair of eyes were often emblazoned upon eating utensils and ships in order to ward off evil. In some cultures, such as the Ashkenazi Jews and in Serbia there were even apotropaic names given to people, which were thought to bring good fortune and keep away evil.

Some more well-known examples of this sort of magic that most might be familiar with can be found in the idea that a horseshoe hung over a doorway provides good luck, as well as the old folk traditions that crucifixes, silver bullets, wild roses and garlic could keep away vampires, and of course the practice of erecting gargoyles to keep away malevolent forces, and there are countless permutations of these efforts to keep away the forces of dark magic and beings, depending on the culture and area of the world. This effort to ward off evil through markings, amulets, and other objects is almost as old as mankind itself, and has been found in various far-flung cultures spanning vast geological distances and time frames, and such practices can be seen in the Middle East, Europe, among Native Americans, and in the Far East in places such as China and Japan.

Notably this occurred in a unique form in Europe, where during the 1500s to the 1700s protective markings were used to guard against witches and their black magic, which were seen as a very real and present threat at the time. In many countries in Europe apotropaic magic took the form of carving or scratching various symbols and patterns, often commonly called “witches’ marks,” into parts of buildings for the expressed purpose of keeping witches out. In particular entryways such as doors, windows, and chimneys into buildings were thought to be particularly vulnerable to witch intrusion, and it is these that were the most adorned with such symbols.

These markings have been found all over Europe, and in particular England, and can be found at such disparate famous places as Shakespeare's Birthplace in Stratford-upon-Avon, the Tower of London, the Knole House in Kent, and countless churches and medieval barns across the land, and even caves, such as Witches' Chimney at Wookey Hole, Somerset, and they are so numerous that they almost seem to have been commonplace at the time. Duncan Wilson, Chief Executive of Historic England, has said of these markings:

Witches’ marks are a physical reminder of how our ancestors saw the world. They really fire the imagination and can teach us about previously-held beliefs and common rituals. Ritual marks were cut, scratched or carved into our ancestors’ homes and churches in the hope of making the world a safer, less hostile place. They were such a common part of everyday life that they were unremarkable and because they are easy to overlook, the recorded evidence we hold about where they appear and what form they take is thin. 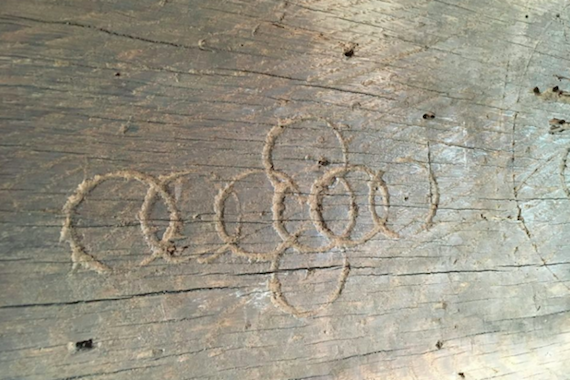 These marks scrawled over entryways all over the place take many forms. Some permutations of these witch-banishing symbols are the “daisy wheel” drawn by compass, which is perhaps the most common form and takes the from of a 6-petaled flower that is supposed to form an endless line that confuses witches and spirits, as well as 5-pointed stars called “Pentangles,” geometric patterns, intertwined Vs and Ms for the Virgin Mary, crisscrossing arrays of lines, letters, and others, and usually these were designed with purposefully endless lines or patterns in order to draw demons or witches within them with their confusing designs and entrap them. In addition to entryways, such markings have been found carved into oak beams beneath floors, near fireplaces, in walls, and even on ceilings.

Ofttimes these apotropaic marks were found within or near churches, and it seems that the church condoned the use of such magic, despite the fact that in general it did not sanction such practices. Indeed, many old churches throughout England are brimming with such markings, a sort of magical apotropaic graffiti so to speak, with all manner of protective spells and even curses scrawled across the walls and ceilings, sitting alongside the other mosaics and decorations. Matthew Champion, author of the book Medieval Graffiti has said of this:

Today, graffiti is generally seen as both destructive and anti-social, and certainly not something that should be either welcomed or encouraged in our parish churches. However, that attitude is a relatively modern one. During the Middle Ages, graffiti appears to have been both accepted and acceptable, leaving many of our medieval churches and cathedrals quite literally covered with inscriptions. 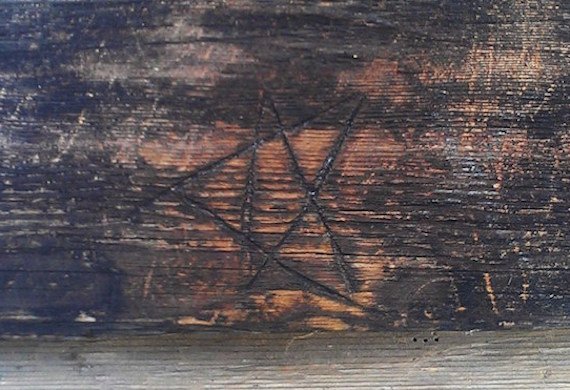 These withes’s markings have been found literally all over the place in England and other parts of Europe, and although they are well documented in famous places and churches, the true extent of them in private, secular dwellings, where they are often found by befuddled homeowners, is largely unknown. There is not a lot of knowledge on how prevalent they are in such dwellings, where they appear, or what designs they take. In order to study this phenomenon Historic England has made an appeal to homeowners to examine their residences and report any strange markings or designs etched into their homes and report them. istoric England’s historic buildings inspector, Nick Molyneux, has said of this:

Basically the marks have been recorded where people have taken the trouble to go and look for them. They are well recorded in many churches, but much less well so in secular buildings. We just don’t have enough data to say whether they are more concentrated in certain parts of the country, or whether patterns are regional, so these are questions we would really like help in answering.

Perhaps such information will help us to gain a further understanding of these mysterious symbols and what they meant to those who crafted them. We have obviously come a long way since the days when people gathered in candlelit rooms to cower in fright from the dark forces they expected to come bursting into their homes, hoping that their protective magic would hold against and deter the onslaught and things they feared would crawl in from the dark. Yet for as much as civilization has perhaps moved on from such magical thinking, these markings can tell us something about history, where such beliefs sprang from, and how they shaped the lives and psyche of those who held them close. In the mean time, it gives one something to think about if one is to ever find some cryptic, arcane symbol carved up in the timbers of their house.