The Strange Case of the Hammersmith Ghost

All over the world there are supposed hauntings, and while very interesting these cases seem to come and go, creeping up into the public consciousness only to fade away into history. Yet some of these alleged hauntings have gone on to become far more than what they began as, and actually reach out to change the world as we know it to some extent. One such case happened in England in the 1800s, and it is a weird case that has managed to change the course of British law, and remains a fascinating look into another time and place.

In November of 1803, a very strange visitor seemed to have emerged at the Hammersmith District of West London, in England. Reports began to come in of some sort of supernatural entity lurking within the dark Hammersmith Churchyard and cemetery, which most often appeared as a tall male figure that emitted an eerie white glow, but also on occasion as dressed in a calfskin garment with horns and large glass eyes, and it showed some very aggressive behavior. In addition to the typical ghostly behavior of shambling about, moaning and generally freaking people out, the sinister ghost was also said to actively chase anyone who came near the area, and that if it actually caught up to the victim would physically assault them.

This happened on one occasion when a woman was passing through the churchyard only to encounter the notorious ghost, which grabbed her in a vice-like grip and caused the terrified woman to lose consciousness and die a few days later. In another infamous report at the time, a man named Brewer Thomas Groom claimed that the ghost had roughly grabbed him by the throat and that he had barely managed to fight the apparition off, and he would say “I saw nothing; I gave a bit of a push out with my fist, and felt something soft, like a great coat.” One elderly woman also reported having been knocked to the ground by the wraith, and another younger pregnant woman was also attacked, with both instances allegedly proving so utterly horrifying that the victims allegedly later died from pure fright. There was another case in which the ghost stepped out of the night to stop a horse driven coach and caused the driver to flee in a desperate panic. On yet another occasion a night-watchman named William Girdler actually reversed the roles and chased the ghost, only to have it vanish before his eyes.

Rumors began to swirl that this was the restless and vengeful spirit of a local man who had had committed suicide and then been buried on consecrated ground, which was believed to have been against church policy and had turned the poor man into a wandering revenant. Whatever the origin of this strange specter, the sightings and terrifying encounters with it increased in number and intensity until no one was brave enough to walk through the narrow lanes of the area at night, and certainly no one went near the cemetery itself. It got so bad that at one point businesses were worried because no one would even pass by the area to make deliveries, and there was a general haze of panic hanging over the whole neighborhood. 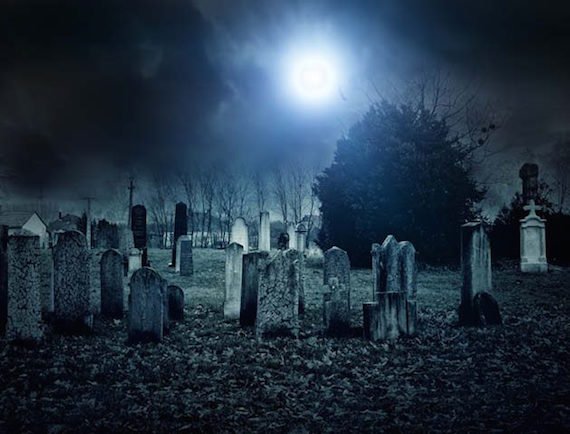 This climate of fear and terror spurred the forming of armed groups of locals, who took the law into their own hands to go out and patrol the area in the hopes of finding out more or chasing the intruder away. It is unclear what they hoped to do with their weapons against a supernatural entity, but many of them believed they were actually dealing with a normal criminal who was terrorizing people and running amok. One of these patrolmen was a man named Francis Smith, who on the evening of January 3, 1804 was patrolling a dark street called Black Lion Lane when he would have an encounter with what he thought was the notorious ghost.

As Smith walked along in the quiet night there was movement ahead, a flash of white, a figure that bloomed from the dark to make its way down a row of hedges towards him. It is unknown whether Smith himself really had believed there was an actual ghost in the area, but at point he certainly did, and after a call out for the figure to halt went unanswered he is said to have exclaimed “Damn you. Who are you and what do you want?” before firing his shotgun at the intruder with a thunderous boom. Strangely, for a ghost, the shadowy figure stumbled and fell upon the road, and this is because it has not been a ghost at all.

Residents of the area came running, and when the body was examined it was found to be a man, dressed in the traditional white clothes of a bricklayer, and he was very dead. The man was soon found to have been a local bricklayer named Thomas Millwood. Francis Smith was promptly arrested on the charges of murder. By all accounts Smith was a rather decent man and completely shocked by the fact that he had killed someone, and he proclaimed as he was taken away to Newgate Prison that he had thought he had fired at the Hammersmith Ghost, but these pleas fell on deaf ears and he would go to trial for the murder of Millwood. 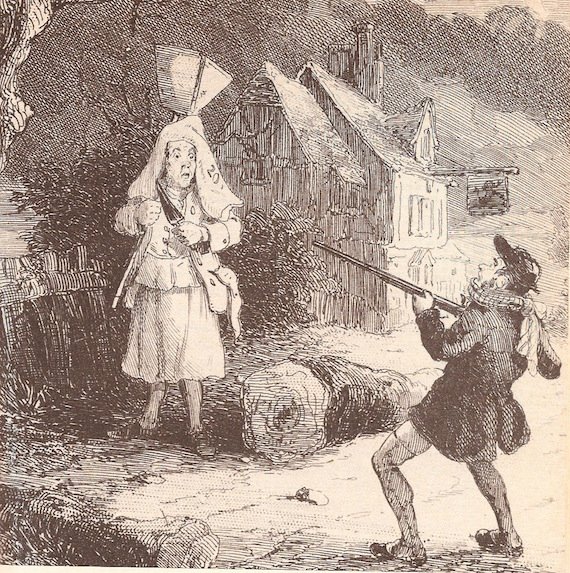 As Smith was awaiting trial several interesting details came to light. One was that the fatal incident had not been the first time that Millwood had been mistaken for the ghost, and he had startled a few people who had passed by, keyed up by all of the talk of wandering specters, to the point that his wife had begged him to change his attire. Another was that Millwood wasn’t even the “real” Hammersmith ghost, but that this honor rather belonged to a local shoemaker named John Graham, who came forward to admit that he had been dressing up as a ghost at night as a prank to scare his apprentice, who had been absolutely terrifying Graham’s children with spooky ghost stories at night. It is unclear if this twisted prank had any connection with all of the many ghost attacks and sightings around Hammersmith, but at the time it was considered case closed, except for Smith, who faced execution for his crime.

In the ensuing trial Smith was found guilty, and despite many testimonies to his good character and the fact that he had not meant to kill Millwood, he was condemned to the sentence of death by hanging and dissection. Luckily for him, the sentence was later commuted to a far lesser punishment of 1 year of hard labor. Through it all, the case presented a legal conundrum for the courts and UK law as a whole, in that it posed the question of whether acting on a mistaken belief, in this case that Millwood was a ghost, was a sufficient defense for a criminal charge, and whether someone could actually be held liable for their criminal actions under this false belief. 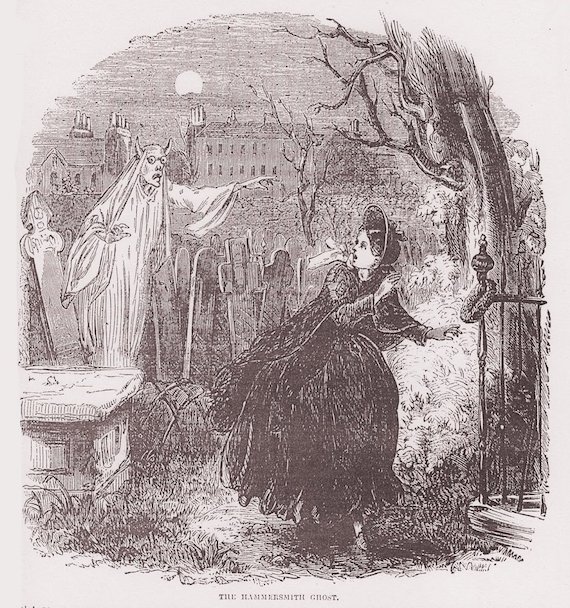 While it may seem at first glance like a simple question, and that guilty is guilty, it presented quite a tricky legal precedent, and would actually be argued and debated for nearly two centuries, until 1983 when the issue would be legally resolved with a Court of Appeal case concerning a man by the name of Gladstone Williams, who had attacked a man he thought had been assaulting another when he had actually been in the process of apprehending a thief. Williams was charged but the ruling was later successfully appealed in a groundbreaking decision by using the defense that he had misunderstood the situation under a mistaken belief, in a case now known as “ R. v Williams (Gladstone),” and this precedent was successfully written into law in 2008. At the time, Lord Chief Justice Lane would say of all of this:

In a case of self-defence, where self-defence or the prevention of crime is concerned, if the jury came to the conclusion that the defendant believed, or may have believed, that he was being attacked or that a crime was being committed, and that force was necessary to protect himself or to prevent the crime, then the prosecution have not proved their case. If however the defendant's alleged belief was mistaken and if the mistake was an unreasonable one, that may be a peaceful reason for coming to the conclusion that the belief was not honestly held and should be rejected. Even if the jury come to the conclusion that the mistake was an unreasonable one, if the defendant may genuinely have been labouring under it, he is entitled to rely upon it.

The decision has changed the landscape of the law in the UK, and it was all thanks to the “Hammersmith Ghost.” In a strange twist of fate, although the ghost was eventually deemed to have been the doings of pranks and mischief, the area truly would seemingly take up a ghostly resident in the form of a supposedly real haunting by none other than the ghost of Thomas Millwood, which supposedly hangs about the Black Lion Lane and a pub located there, spooking patrons with strange noises and manifestations. This presents the rather odd situation of a fake ghost causing a death of a man who was mistaken for a ghost, leading to a real ghost originating with the victim of that crime. Mind blown. The case of the Hammersmith Ghost has gone on to become a rather curious historical oddity, and a landmark instance in which the paranormal, or at least the belief in it, changed the law as we know it.