How do you know when your close encounter of the third, fourth or fifth kind is good enough to be a close encounter of the famous kind? How about when the city where it happened sets up a UFO trail so others can walk the path where you were dragged by your feet into a spaceship and later unceremoniously dumped, scratched and bruised, back on the ground where you had to crawl back to your truck, which would no longer start, forcing you to stumble back to your house? Sure, a movie about your experience with Sean Connery playing you would have been nicer, as would the trail being dedicated while you were still alive, but the wheels of UFO and ET encounter acceptance move slowly. The good news is, Scotland now has its first UFO trail and it honors Bob Taylor and his Dechmont Woods Encounter.

“The Dechmont Woods encounter is Scotland’s most famous alleged UFO incident, and has featured in a number of books and TV programmes. The information board will help visitors to Dechmont Law find the exact location of the encounter, as well as give details of Mr. Taylor’s report of the incident.” 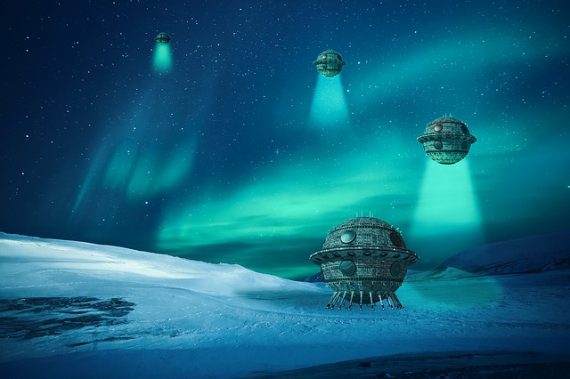 For those who can’t wait to read the board themselves, The Scotsman interviewed Tom Conn, executive councillor for the environment, about the new trail and retold the story. On November 9, 1979, forestry worker Bob Taylor claimed to have parked his truck near Dechmont Law (Decky Hill) in West Lothian and was walking his dog in the woods when he saw a flying dome about 6.4 meters (21 feet) in diameter with small propellers hovering over a clearing. Smaller domes about the size of “sea mines” allegedly grabbed him and dragged him to the dome, where he smelled something like burning brakes before passing out. The ships were gone when he came to 20 minutes later and had to walk back to his house. His wife later confirmed he was muddy and his clothes were ripped, while a doctor she called confirmed the scratches and bruises. The local police took his story and examined the site of the alleged encounter, finding "ladder-shaped marks" and small circular holes in the ground, but decided this was a simple case of assault.

Of course, you don’t get your own UFO trail for a human assault. While other investigators found evidence that the holes could have been made by the local water company, and psychologists attributed his scratches and torn clothing to an epileptic fit, Taylor, a respected member of the town, stuck to his story until he died in 2007 and convinced many people over the years that he had been abducted by aliens.

“The Dechmont Woods UFO site is the only site in Scotland that officially recognises an event of this nature and whatever UFOs may be, there is no denying that this case stands head and shoulders above anything that has been seen in Scotland.”

One of those people is Malcolm Robinson, the author of numerous books about UFO sightings in the UK, who just so happens to be writing a book on the event.

“I was 22 years of age and I stood at the site two days later and saw all the ground traces myself. I’ll never forget it.”

You’re right … the trail and explanatory board will probably help his book sales, not to mention souvenirs. Tom Conn agrees.

“Dechmont Law is already very popular with local residents, especially runners and walkers, and we hope this board will help more people discover and enjoy the picturesque area.”

Do I hear a Dechmont Woods UFO Trail 5K in the works?