Welcome to Cassadaga, the Haunted Psychic Capital of the World

The world is full of eccentric, often very weird places that remain almost in their own little worlds off the beaten path. Such locales often have very colorful histories and oddities, and whether one goes there on purpose or merely stumbles across them one is bound to find a range of strangeness bound to entrance and entertain. Certainly one very unique and mysterious place lies in the U.S. state of Florida, and is a secluded community of psychics and spirit mediums that both communes with ghosts and is also haunted by them. Welcome to Cassadaga, the Psychic Capital of the World.

In the 1800s a trance medium from Pike, New York, by the name of George P. Colby was making a living traveling around the United states conducting seances and giving spirit readings, and at the time he had made quite a name for himself doing so, to the point that he was widely called the “seer of spiritualism” and had accrued a bit of fame. In 1875, Colby had a strange experience when he was supposedly contacted by the spirit of a Native American who called himself Seneca during a seance at Lake Mills, Ohio, and who claimed to be the medium’s spirit guide. Seneca told Colby that he was destined to travel to the state of Florida, where he was to found a spiritualist camp that would be among the greatest the world had ever seen.

Colby did as was instructed, along the way making friends with a medium named T.D. Giddings, and he would continue to receive guidance during his numerous sessions with the spectral Seneca, told that they would find a place “on high pine hills overlooking a chain of silvery lakes.” In this way, the spirit guided him to a place near the remote settlement of Blue Springs, Florida, a plot of around 35-acres that was near seven wooded hills and Lake Helen and pronounced to be the location of the spiritual camp floating through his visions. Colby and the entire Giddings family would then sign a deed for the land and move in to set up homesteads on what was at the time merely a backwoods feral expanse of trees and scrub brush. Interestingly, it was found that the waters of the nearby lake and spring had healing powers, and Colby would later claim that this water from the local springs had cured him of a case of tuberculosis.

Word soon got out about the healing properties of the springs, and that the famous “seer of spiritualism” and his medium friends had taken up residence here, and lo and behold other mediums and spiritualists began to trickle in, setting up their own humble abodes on this land, and the settlement that would be called The Cassadaga Spiritualist Camp was birthed, with “Cassadaga” being the Native word for “water beneath the rocks,” and the name chosen for a lake of the same name near a similar camp in New York called the Lily Dale Assembly. At first it was mostly a winter retreat for spiritualists, but more and more people began to move in permanently, until by the 1920s it had became an actual town and a major center of spiritualism in the United States, with the size of the camp gradually blossoming to 57 acres and attracting mediums and mystics from all over the country and eventually the world. 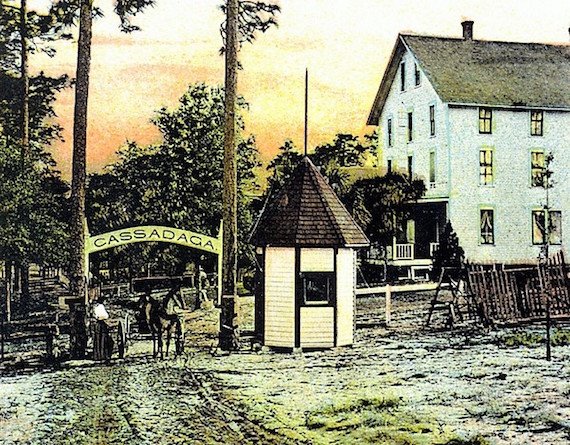 Colby would die in 1933 and be buried in the nearby Lake Helen cemetery, but his legacy would live on and grow, the town he had founded attracting visitors and spiritualists from all over. Of course not everyone was happy with this thriving refuge of mystics, least of all the hardcore religious, who viewed it all as the work of the Devil and populated by pagans, witches, and heathens. Preachers warned their congregations to stay away, and there were quite a few people who were just as scared of the place as they were curious. After all, this was a creepy backwater little town sequestered away from the world in a remote wilderness and full of psychics, mediums, and fortune tellers, who could have been up to anything out there on their own. All manner of rumors began to spring up, such as that the Devil lived there, that the commune dumped the bodies of their deceased into the nearby lake, that they engaged in all manner of arcane rituals and human sacrifice, and that they eerily had no children, with most of these rumors ignited and fanned by the Church.

This all sowed a great deal of apprehension and distrust among some locals and religious institutions, but the town nevertheless continued to bloom, growing to its current population of over 4,000 permanent residents, almost all physics, New Agers, fortune tellers, mediums, or magicians of some type, earning this sanctuary of the weird the nickname “The Psychic Capital of the World.” Present day Cassadaga hasn’t really changed much appearance-wise from the days of its spurting growth, appearing as almost stuck in time with its old-fashioned buildings and historic feel, a snapshot of another time, which has contributed to it being placed on the National Register of Historic Places in 1991. Here one can find all manner of establishments for psychics, mediums, seances, spiritualists, healers, tarot card readings, and palm readers, as well as New Age shops and bookstores, and various spiritual tours of the area, which is believed by the residents to be a spiritual hotspot that sits on a vortex. It is overall a weird place that still stirs apprehension and misconceptions in some people, and Kristin Congdon, a professor at the University of Central Florida, has said of Cassadaga:

A lot of the people who come here don’t want to tell anyone else that they come here, or that they are Spiritualists. There is fear of losing their jobs, there is fear of reprisal. Many people who come here come initially out of curiosity. They want to see what it’s all about. Some people feel standoffish about it like it’s a place for witches, or Satanism. There are stories like ‘birds don’t fly over Cassadaga, which of course they do. 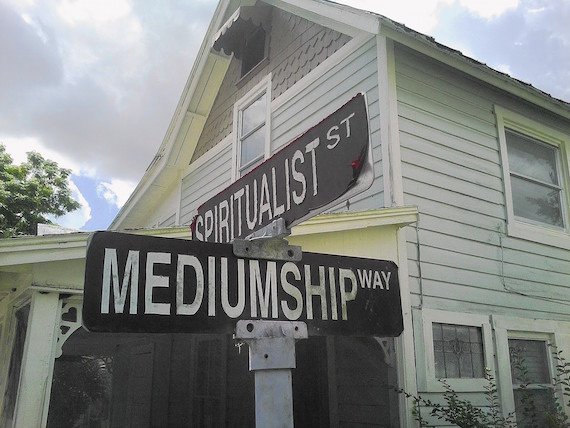 Interestingly, Cassadaga has not only gained a reputation as being the spiritualist capital of the world, but also as being one of the most haunted places in Florida. One of the most infamous of the town’s haunted buildings is the Cassadaga Hotel, which maintains a distinct roaring 1920s vibe and is said to be prowled by a ghost named Arthur. This particular spirit is said to enjoy dragging furniture around, flicking lights on and off, and sitting by the windows of the hotel, and he apparently leaves the odor of gin and cigar smoke in his wake. Another famous haunting is at the town’s cemetery, which is even said to have an ornate, old fashioned haunted chair called “The Devil’s Chair,” and there have been numerous apparitions seen here, as well as at the lake. The whole town in general is known for producing a wide array of ghostly phenomena, and this is said to be due to its position over a vortex that allows travel between the physical world and the spiritual.

Whether one really believes in psychic powers or ghosts or not, Cassadaga is nevertheless a refreshingly strange historical location that lies well off the beaten path. The town is apparently very welcome to visitors and features a good amount of historic buildings and an ambiance that is sure to make you feel as if you have stepped through a doorway into another era, so if you are looking for a tourist attraction that is a bit off-kilter and different from the usual fare, perhaps Cassadaga is worth a visit.

Mysterious Blue Space Rock is Neither Comet nor Asteroid