When Aliens Landed at the Olympics

In June 1984, American Psychology magazine posed a question to its readers: “Do you believe in UFOs?” 50% of respondents said yes. A decade earlier, only 40% of respondents to the same question in a Roper Poll had replied in the affirmative. While it is impossible to accurately account for this apparent 10% increase in belief, it seems reasonable to speculate that Hollywood played a significant role. Spielberg’s iconic UFO movie Close Encounters of the Third Kind had been released to huge acclaim and box-office success in 1977. Inspired by the research of UFOlogists like J. Allen Hynek and fuelled by Spielberg’s own life-long obsession with flying saucers, Close Encounters was the most ufological movie ever made, and it treated its subject matter with respect and gravity. More importantly, and in stark contrast to the majority of Hollywood’s alien-themed output in the past, Spielberg’s film dared to present aliens as creatures of benevolence and wonder—not as invaders, but as saviours. Spielberg struck gold again with the alien saviour concept in 1982 with his blockbusting E.T.: The Extraterrestrial, which rapidly became the most successful film of all time and spawned numerous movies in the same vein throughout the 1980s.

Two months after the June 1984 American Psychology magazine reader poll revealed that fully half the country believed in UFOs, the closing ceremony of the Olympic games in Los Angeles demonstrated just how deeply UFOs and aliens had become ingrained into the American psyche—and the extent to which they had become inseparable from cinema.

The highlight of the Olympic closing ceremony that year was the staged landing of a giant flying saucer and the subsequent emergence from within of a space alien (friendly, of course) who then officially declared the games closed. In an awesome spectacle clearly inspired by the final scenes of Spielberg’s Close Encounters, the Olympic saucer communicated with the awestruck crowd below through a series of elaborate light shows, the orchestral music swelled to a crescendo, and the UFO descended to rapturous applause. It was a sight both bizarre and magnificent to behold. 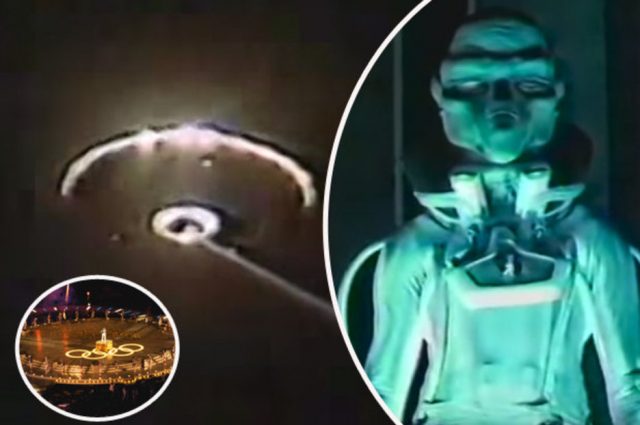 Bizarrely, the event has since become the subject of conspiratorial musings in the UFO community. For years, UFO buffs have speculated that the Olympic UFO of 1984 was not a prop suspended by a helicopter, but a real flying saucer—either manmade or alien—owned by the US government and flaunted on the world stage for all to see. This idea can be traced back to Bill Cooper, author of Behold a Pale Horse, which, since its publication in 1991, has become a sort-of bible for conspiracy theorists.

In an undated interview from the early-1990s, Cooper remarks of the Olympic UFO:

“Well, it wasn’t held by a helicopter. There’s no helicopter up there holding this thing. They tell you that, but it’s not true. Can you imagine the liability that they would have if they were carrying this thing suspended on a cable underneath a helicopter over the heads of hundreds-of-thousands of people?”

Cooper then states his belief that “there was no helicopter, there was no cable,” and that the UFO was “operating under its own power.”

In his 1991 book, Cooper contended that the US government had, for decades, been working covertly with alien intelligences and that it had in its possession highly advanced technologies, including flying saucers, both manmade and extraterrestrial. He also believed that the powers that be were planning on exploiting the alien presence by staging a false flag alien invasion in order to usher in martial law and establish a one-world government. Cooper died in a shootout with sheriff’s deputies at his home in Eagar, Arizona in 2001 following charges of aggravated assault with a deadly weapon and endangerment stemming from disputes with local residents. Many in the conspiracy community today are convinced that Cooper’s death was orchestrated by the New World Order because his work was too close to the truth. 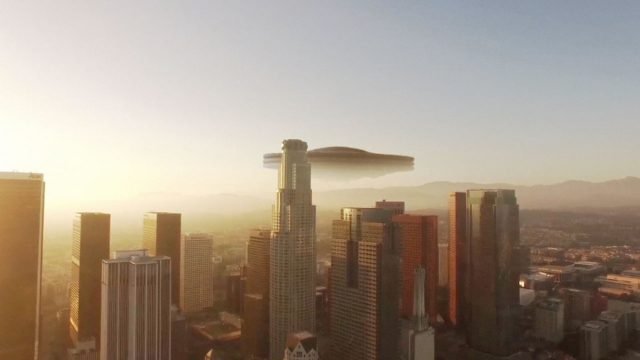 In light of his well-established position that the global elite were planning a false flag ET invasion, Cooper’s statements about the Olympic UFO being real led many of his followers to believe that the 1984 Olympic closing ceremony was a test of public reaction to an alien landing, and a rudimentary dry-run for a spectacular and devastating false-flag event that was thought to be in the pipeline.

If you’re one of the people who believe Cooper about the Olympic UFO, prepare to be disappointed (or, perhaps, relieved).

It’s been known for years by anyone who has ever taken a few moments to do some digging (which apparently excludes most UFO conspiracy theorists) that the 1984 Olympic UFO was actually the work of the celebrated Disney ‘Imagineer’ Bob Gurr, who is credited with designing most of the original attractions at Disneyland.

In 2004, Gurr wrote an article for Designer Times, in which he describes in detail the time and effort that went into creating the Olympic UFO spectacle. Gurr remembers vividly the reaction to his finished product on the night of the ceremony as his UFO descended from the sky:

“An audible gasp swept the Los Angeles Memorial Coliseum… Was it real? Some of the 92,000 onlookers certainly thought so. Millions of worldwide TV viewers stared in amazement....was this really happening? Or just more of what the entertainment capital of the world does for everyday life.”

Gurr then goes on to answer his own question as he recounts the origins of the project and how it all came together. Originally, the ceremony was to be produced by Disney, but, when the entertainment giant was unable to furnish a budget on time, the reins were handed over to David L. Wolper (producer of Willy Wonka and the Chocolate Factory). Tommy Walker, who had been Director of Entertainment at Disneyland, was enlisted as Director of Ceremonies. It was Walker who suggested that a flying saucer be featured as the highlight of the 1984 ceremony, and it was Walker and Wolper who enlisted the services of Bob Gurr has head designer on the contract, which was won and carried out by Plainview of Hollywood.

The task was to create a flying saucer 50 foot in diameter fitted with hundreds of special lights. With only two months to go before the August 12, 1984 show night, the work began. “The wild contraption I envisioned got drawn up and built at a furious pace,” writes Gurr in his article, noting that the saucer had to carry a lot of equipment and also needed to be light enough to be carried by a Bell 314 big-lift Helicopter:

“So I made an outer ring of welded aluminium truss sections all pulled together by cables to a center triangular frame. This was inspired by the extremely light construction of the 1930s Hindenburg Zeppelin. The saucer looked like a slice out of the Hindenburg turned sideways.”

According to Gurr, the center frame of the saucer carried a 90 KVA 208 3 phase gas turbine generator, and, for its spectacular light display, the saucer used three-hundred-and-sixty 600 watt Ray Lites, a Pichel Industries 7K Xenon searchlight, plus “a whole bunch more lighting gizmos totalling 432 items using 238,200 watts... but not all at once!” The wiring alone stretched 1.5 miles. The total ready-to-fly weight was 3,689 pounds.

Finally, after just five weeks of work, and only nine days before the show, the Olympic flying saucer was assembled and ready to fly. And fly it did—into the imaginations of the millions who watched it live, including Bill Cooper, and, in turn, numerous online conspiracy theorists who became convinced that the global elite had, that sticky August night in 1984, given us a tangible glimpse of their hidden world. The reality—that a handful of talented and determined individuals had grafted hard and fast to create a Hollywood illusion—is far less exciting than the conspiracy, but impressive nonetheless.

“But wait, what about the alien?” you may ask. The one who made his entrance in the stadium that night and greeted humanity. Shockingly, he too was of this Earth. Inside that alien costume was George Bell, a former basketball player with the Harlem Wizards and Harlem Globetrotters and, at 7 feet 8 inches, the former tallest man in the United States. 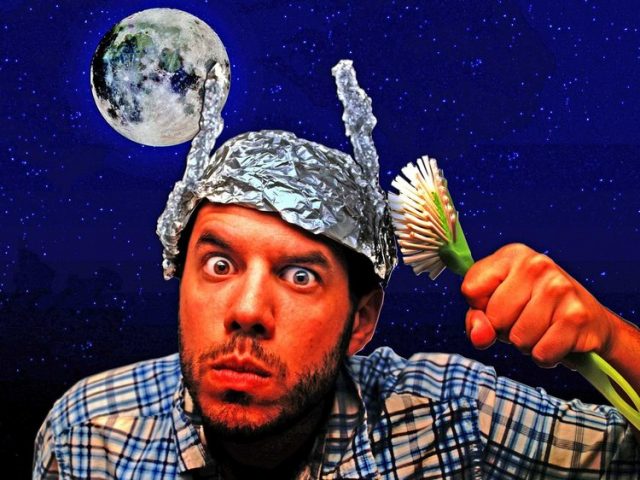 So, move on people, nothing to see here. Except, maybe, just maybe, the whole Olympic acclimation theory shouldn’t be thrown out with the rubber alien. The original contract was, of course, intended for Disney, and, ultimately, it was Disney’s chief Imagineer who realised the vision. This provides at least some food for thought in the context of Disney’s long and intriguing history with the UFO subject, which involves at least one instance of the entertainment giant working with officialdom allegedly for purpose of testing public reaction to alien reality. If you don’t already know the full story behind this, get comfy, put on your tinfoil hat, and discover The Inside Story of Disney’s Mythic UFO Documentary and Conference…

Fleet of UFOs Filmed Flying Over The Hague