When the Supernatural Feeds on Us

Right now, I have a new book out. Its title: Paranormal Parasites. It is focused on the disturbing claims that certain, supernatural entities use us as a form of "food." "Dan," of Barstow, California, had a very disturbing encounter with two Shadow People in early 2011 (the Shadow People being silhouetted figures that terrify and taunt people in the dead of night). A no-nonsense, tough biker, Dan is hardly the kind of person who is easily intimidated or scares. But, the shadow-things that intruded on his sleep—as he slept in a tent on the slopes of Mt. Rainier, Washington State in the summer of 2011—had Dan in a state of near-hysteria. An enthusiastic outdoorsman, Dan spent four days hiking around the huge, 14,000-foot-plus high mountain. He would live to regret doing that. It was around 3:00 a.m. when Dan woke with a start and with an unsettling and intense feeling of being watched very closely. He lay still, holding his breath and clenching his fists. Something was definitely afoot; of that much he was sure. That's an understatement. In seconds, Dan was "rushed" by two spindly, shadowy monsters that were humanoid in appearance.

Dan suddenly found himself unable to move as the two figures hovered over him, and he felt incredibly weak, short of breath, and dizzy. A cold sweat enveloped him. All the time, the Shadow People had their index fingers on his stomach. Dan came to believe that the Shadow People were quite literally draining him of his energy.

Imagine waking up in the early hours of the morning and being confronted by one of the most terrifying-looking creatures that you could possibly ever imagine: a pale-skinned, humanoid monster with withered arms and legs, a huge stomach, an oversized neck, and a mouth smaller than a dime. It stares at you in malevolent style as it leans in close. You suddenly develop a terrible feeling that the monster is seeking out your life-force, your vital energies, and your very essence. A sudden weakness and helplessness overwhelms you, as you seek to fight off the terrible thing that has suddenly invaded your space. In seconds it is gone, though, sated and satisfied by the fact that it has just fed on you. Whether you realize it or not, what you have just encountered is an ancient supernatural entity known as a hungry ghost. 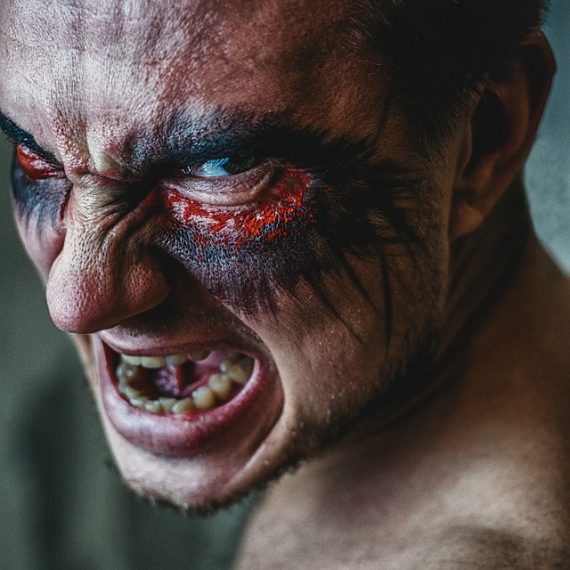 In some cases, a hungry ghost will resort to one of the most sinister ways of feeding: it will target a person with a particular vulnerable character; weakness, insecurity, or a lack of self-esteem are all angles that the hungry ghosts will seek out and exploit. They will then possess the victim. The reasoning behind this is, for the hungry ghost, quite understandable. If the starving spirit is itself unable to eat, it will invade and take control of both the mind and the body of the person in its sights. In that sense, we're talking about something very similar to full-blown demonic possession, in which the mind of the victim is paranormally elbowed out of the picture and becomes the tool of the supernatural monster. The monster will quickly feed—greedily so—on just about anything and everything it can get its claws into, when in the body of its human host. Then, when the creature exits the soul and mind of the person it briefly inhabited, it takes with it the energy derived from the food that was ingested by the briefly possessed host. The hungry ghost is, then, one of the most manipulative of all the many and varied paranormal parasites that haunt our world.

The term "vampire" was not used in the English language until the 1700s, when it appeared in the pages of Travels of Three English Gentlemen in 1746. Nevertheless, tales of marauding, deadly blood-drainers—in human form—can be traced back to the dawning of history and civilization. Lilith (quite possibly the most dangerous bedroom invader of all) was said to not just have sex with men as a means to "steal" their sperm, but also to take their blood. The people of ancient India believed in the dreaded Vetala. Although they were spirit-based in nature, they also had the ability to drain the living of blood. They were also known for bleeding dry fresh corpses; they would lurk in the shadows of old cemeteries and graveyards, patiently waiting for darkness to blanket the landscape, at which point they would dig deep and fast into the ground, seeking out that most precious commodity of all: blood.

In his best-selling 1987 book Communion (a study of the "alien abduction" phenomenon) Whitley Strieber made it very clear that his own encounters with "the Visitors," as he termed the creatures he encountered, revealed a startling connection between alien abductions and the human soul—even a paradigm-shifting connection. In his book, Strieber talked about how abductees experienced their souls being "dragged" from their bodies during abductions. Strieber himself was told by his abductors that they "recycled" human souls. That sounds quite comforting, as it suggests reincarnation may be a reality, something that will ensure us further lives after this one. But, was Strieber being told the entire truth by his captors? Or, was this an attempt on their part to push thing down a different, more appealing path? Certainly, Strieber admitted something notable that suggests he recognized that not everything was good and positive.

Strieber said that, the more and more he dug into the matter of his encounters, and as he tried to get a handle on what was afoot, he was unable to banish from his mind the theories of Charles Fort. For those who may not know, he was an acclaimed writer on all manner of paranormal phenomena. His books included Lo! and Wild Talents. Fort had darkly suggested that, in Strieber's own words in his 1988 book Transformation, we, the human race, are "animals here for the slaughter and incapable of seeing the greater and more terrible meanings that surround us."

As for more on Charles Fort's opinions, they can be read in his classic title of 1919, The Book of the Damned. Fort wrote: "I think we're property. I should say we belong to something: That once upon a time, this earth was No-man's Land, that other worlds explored and colonized here, and fought among themselves for possession, but that now it's owned by something: That something owns this earth—all others warned off."

Joseph McCabe, a Franciscan monk, who passed away in 1955, knew a great deal about all of this. He spent years poring over ancient texts and doing his utmost to understand the nature of the creatures that so terrified those who lived in Mesopotamia, and particularly so the Sumerians. McCabe had a particular interest in a pair of highly dangerous demons called Lilu and Lilitu who dwelled in the region. He was clearly aware of how illness was a side-effect of a supernatural encounter. He said, in The Story of Religious Controversy: "Did a maid show the symptoms of anemia? Obviously Lilu or Lilitu had been busy at night with her body."

McCabe went on to list literally dozens of cases he had on file of people who had nighttime encounters with supernatural entities and who, shortly thereafter, began to exhibit signs of anemia. Sometimes acute anemia, but in incredibly quick time. This all strongly suggests that certain paranormal things were depleting the people McCabe referred to in significantly dangerous fashion. 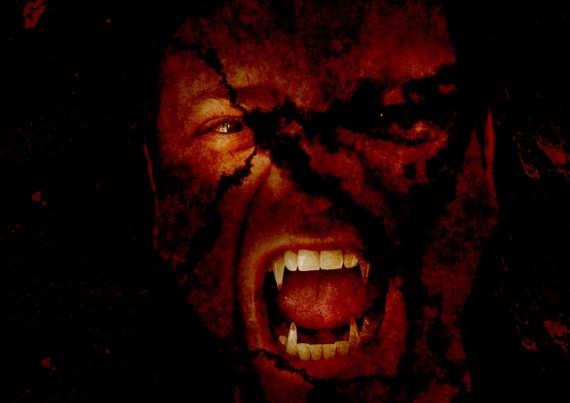 A perfect example of someone falling ill very quickly after a paranormal event is that of Albert Bender, the guy who pretty much kicked off the whole Men in Black mystery in the early 1950s. After getting too close to the truth behind the UFO phenomenon, Bender was visited by three strange and menacing MIB. They were not of the Will Smith and Tommy Lee Jones type, though. Rather, they were far more like today's so-called Shadow People. They were phantom-like things with shining eyes and bad attitudes that walked through the walls of Bender's attic-based abode in Bridgeport, Connecticut. Bender was terrified by the warnings of the MIB, who told him to quit Ufology. Or else.

As it turned out, it took several threats and creepy encounters before Bender finally heeded the words of the terrible trio. When all of this was going down, Bender went down, too: with head-splitting migraines, severe stomach pains, faintness, and issues with his short-term memory. And, he lost significant weight—suggesting he too was being fed on. Was all of this due to the fear and stress that had been instilled in Bender? Or, had he somehow been supernaturally attacked? Who knows? But, things didn't end there: Bender—quite out of the blue—developed a fear that he had cancer. Fortunately, he didn't have cancer at all: after quitting Ufology, and getting married, the symptoms went away and Bender lived to the ripe old age of 94, passing away in 2016.

As so often happens when I write a book, people contact me to share their experiences. One of those people was "Jim Harpur," who said that he had an encounter with a pair of what have become known as Black-Eyed Children, in March of 2008, in Florida. At the time, Jim and his wife were living in a rented duplex in a small town outside of Orlando.

Jim's encounter was a typical BEC one: there was a knock on the door late at night and Jim, having peered through the spy-hole on the front-door, saw two kids in black hoodies, both staring at the ground. He tentatively opened the door and was confronted by a pair of pale-faced, black-eyed monsters—who were now staring right at him. Jim slammed the door and never saw them again. Two days later, though, he experienced a severe case of dizziness, followed by a couple of pretty bad nosebleeds. Then, three weeks later, after feeling repeatedly sick, nauseous, and shaky, he was diagnosed with type 2 diabetes. Jim's blood sugar levels were extremely low. Having read up on the BEC phenomenon, Jim wonders if his diabetes was somehow provoked by BEC so adversely affecting him at the time of his encounter.

Then, there is the account of Michelle, a resident of Nova Scotia, Canada. In January 2017, and just two days after having a graphic dream about the Slenderman, Michelle was hospitalized with severe ulcerative colitis, which she had never had before and that led her to drop five pounds in just a few days. She finally made a good recovery, but was shaken by the timing of the onset of the condition, which she believed (and still believes) was connected to the skinny monster of her nightmare.

As all of the above demonstrates, dangerous, paranormal parasites can be found just about here, there and everywhere. Beware!