History is full of various aviation mysteries that have gone unsolved. There are dozens upon dozens of cases of planes shooting up into the skies only to come back with fantastic stories of weirdness, or conversely to never come back at all. From missing flights like that of Amelia Earhart to encounters with UFOs, vanished aircraft over the Bermuda Triangle, and more, the skies have always been a mysterious place to venture into, with numerous unsolved mysteries to be found here among the clouds. One very odd case of an aviation mystery is a flight that supposedly disappeared into nothingness, only to reappear decades later halfway across the world with nothing but riddles and strange clues.

A very odd account was written of in an issue of the Weekly World News magazine on November 14, 1989 by a journalist named Irwin Fisher, and although the name of the magazine should be sending alarm bells ringing, the tale that it told has gone on to be an oft-discussed oddity. The whole story supposedly centers on an airliner, Santiago Flight 513, which was a Lockheed Super Constellation that was carrying 88 passengers and 4 crew members when it embarked on a flight from Aachen, Germany on September 4, 1954 on what was to be a routine flight to Chile. However, this was all to apparently become far from routine, and the plane went on to completely vanish without a trace somewhere over the Atlantic Ocean, flying off into nothingness and legend. Despite an intensive search, no wreckage was ever found, and the flight was considered simply lost at sea, with all on board officially considered dead.

That is far from the end of the story, and according to the article decades later, on October 12, 1989, a plane came in out of the blue over Port Alegre, Brazil, where it proceeded to circle the airport several times before coming in for a landing and then simply sitting there on the tarmac. Throughout the whole surreal scene there was apparently no successful communications between air traffic control and the pilots of the mysterious craft, just a wall of quiet, so a team was put together by airport personnel to approach the idling plane that was crouched out there on the runway in total radio silence. 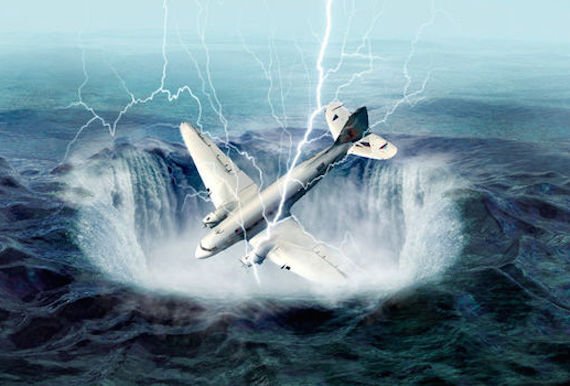 As they approached, the team was immediately unsettled by the fact that the mystery plane had emblazoned upon its side the logo for Santiago Airlines, which by that time had been out of business for some time, since 1956, and when the plane’s numbers were run through the system it was spookily discovered that it was the very same plane that had supposedly gone missing over 3 decades previously. Despite being gone so long, it seemed to be in perfectly good working order, with no sign that so much time had passed and no wear or tear, and there was much chatter as to why a plane that had vanished into thin air had just swooped in out of the clouds to make a perfect landing upon the runway only to sit there in silence.

When the team warily approached the dormant aircraft, which sat there almost as if a beast ready to pounce, they pried the doors open, and at that point probably no one there had the slightest idea of the horror show that was awaiting them within that dim vessel. According to the tale, within the cramped confines of that aircraft there was not a single living person on board, but rather the macabre sight of every single passenger and crew member sitting there as skeletons, their empty eye sockets staring off into the abyss of whatever they had seen. Even the pilot, Captain Miguel Victor Cury, was a skeleton, his desiccated fleshless fingers still gripping the controls tight, and leaving everyone to wonder just how the plane had managed to land in the first place. Through this all, the planes perfectly working engines were still idling away, completely ignorant of the fact that 35 years had passed since the doomed aircraft had left its destination.

Upon this grim discovery, the airport officials apparently went about totally covering the whole thing up, and there was quite a bit of debate on what was going on. One researcher named Dr. Celso Atello has said that the case demonstrated a clear case of a portal or wormhole of some sort, saying that Flight 513 had “almost certainly entered a time warp, there is no other explanation.” According to the reports, the only thing the Brazilian government was willing to concede was that the flight had appeared out of nowhere and landed safely, but other than that it has refused to offer any further explanation or speculation. Retired physics professor Roderigo de Manha chimed in on this lack of transparency, complaining that the government had a duty to share what it had learned in the investigation, saying:

The public has a right to know everything about this plane and the government has a duty to tell them. If this plane did enter a time warp and there is evidence to prove it, the entire world should be told. Something like this could change the way we view our world and alter science as we know it. It is crime to keep information like this secret, especially from the relatives of the people who perished on Santiago Airlines Flight 513.

In the meantime, the Brazilian government has refused to offer up any more information of the case, and it has subsequently been left open to discussion and debate. Of course, considering the source of this story and its spectacular nature there has been quite a bit of skepticism pointed its way, saying that it is all merely a clever urban legend and hoax, but what if it isn't? Is there any truth to this tale at all, and if so what was going on here? How could a plane vanish and then reappear decades later, good as new, only to make a perfect landing while all of its occupants were skeletons? While this is most likely a good old-fashioned journalistic yarn, it is certainly curious nevertheless, and it joins the many aviation mysteries that have come before it.

Oregon Marijuana Shop May Be Haunted By Stoned Ghost