A Mysterious Ancient City in Lebanon

The ancients never cease to baffle us with the mysterious structures and puzzles they have often left in their wake. Bizarre artifacts, strange relics, and confounding buildings or structures litter the landscape of history, often challenging us on what we think we know of ages gone by. One very mysterious such structure can be found in the country of Lebanon, where a temple and its vast monoliths have been baffling engineers and archeologists for years.

Nestled within the foothills of Lebanon’s fertile Beqaa Valley is an ancient city called Baalbek. Considering the valley itself has been continuously inhabited for approximately the past 9,000 years the city is absolutely ancient, with a long history spanning back to the dawn of civilization, and it has over the eons been passed from the Egyptians and Assyrians on to the Greeks, the Roman Empire, and beyond, and throughout it all this has long been considered a mystical and holy place by all who set foot here. The large number of ancient temples and religious ruins here are testament to this long history as a sacred place, and one of the first that was erected here was an altar built by the Canaanites in 2,000 BC for the purpose of trying to appease and harness the powers of their god Baal, who controlled rain, thunder, fertility and agriculture. When Alexander the Great swept in in 334 BC, the temple area was expanded and enlarged, and changes and additions continued on with the coming of subsequent conquerors such as the Ptolemies of Egypt and the Greeks, who called it the called Heliopolis, or “City of the Sun,” but perhaps the biggest changes were made by the Roman Empire.

The then ruler of the Empire, Julius Caesar himself, launched a massive campaign to erect an enormous temple complex that was envisioned as encompassing three main gigantic temples dedicated to Jupiter, god of sky and thunder, the god of agriculture and wine, Bacchus, and the goddess of love and beauty, Venus, and additionally another temple would be built in honor of the god Mercury on a nearby hill. It was an ambitious project to say the least, and indeed Julius Caesar would never see it completed as it would take around 3 centuries before the immense temples were completed. The Roman Empire was certainly the heyday of Baalbek, but although the Romans left behind many breathtaking ruins here from the era, they also left behind some perplexing unsolved mysteries.

While all of the temples of the complex are impressive, the mystery lies within the one dedicated to Jupiter, which measures 47.7 m × 87.75 m (156.5 ft × 287.9 ft), and sits elevated above the land around it, once decked out with 54 giant columns, of which only a few remain. What really makes it stand out are the three colossal megalithic blocks squatting on one side of its podium, each measuring 22 meters in length and weighing over a hundred tons, by some estimates several hundred tons or more, and all of them carefully and tightly linked together upon a foundation of 6 massive blocks of granite. These gargantuan stones are collectively known as the Trilithon, and they are so incredibly heavy that no one is quite sure how they were put into such a precise position there, as not only are they raised a considerable distance above the ground, but the nearest quarry for these rocks lies around 1 km away.

The stones themselves are far too heavy for any known method the Romans had at their disposal to move them such distances or place them as they are. Even the sophisticated cranes the Romans were known to have used were not believed to be sufficient to lift such massive mighty weight, and it doesn’t look like any one even tried, as the Romans usually drilled holes into heavy rocks to help them be moved by crane, called “Lewis holes,” but the Trilithon have no such holes. So how did they do it? There have been theories that they could have been sort of rolled into place along earthen banks, or that they used some system of capstans, pulleys, or other tools to inch the rocks along with the help of hundreds of men, but no one has really been able to adequately explain it or show how it would have actually been possible with the tools available to the people of the era, and indeed moving and precisely placing such massive rocks would be quite difficult to do even with the technology we have now. At the moment no one can really figure out how they not only moved these rocks from the quarry, but also raised them and put them into such a perfectly aligned position.

Adding to the mystery is another rock of even larger dimensions lying partially buried and discarded nearby called the Stone of the South, which is 19.6 meters (64 feet) in length, 6 meters (19.6 feet) in width, and about 5.5 meters (18 feet) in height, and claimed to weigh over 1,000 tons, and within the quarry itself is yet another enigma called the “Stone of the Pregnant Woman.” This rock is 69 x 16 x 13 feet in dimension, also weighs around 1,000 tons or more, and in this case is still attached to the quarry, only partially unearthed as if it was abandoned in mid-construction. Both of these enigmatic giant stones are some of the oldest human hewn megalithic rocks known to man, and seem to suggest that there was still construction going on that was abandoned for reasons unknown. Indeed, no one is really even sure of why the Trilithon was built in the first place or even how old it is. Some ideas are that it was used as a retaining wall, that they were meant to be eventual foundation stones for something even larger, or that it was merely an impressive show of religious devotion, but no one really knows why it was made or why construction was seemingly halted. 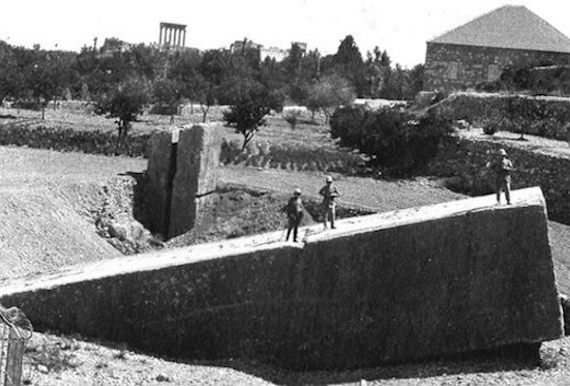 Of course as with many other mysterious megalithic sites around the world there are more far out theories. Some have suggested that the Trilithon actually not only predates the Romans and the Greeks, but also was not even built by humans at all, and Baalbek is often mentioned in the same breath as ancient aliens. Why aliens would want to build it is anyone’s guess, but it remains a popular theory among ancient alien theorists, who claim that it is not just improbable that humans moved these stones, but that it is downright impossible without some incredible technology that we don’t even possess now. Other equally fringe theories are that this was the anomalous work of some lost civilization from beneath the earth that had access to antigravity technology, or that the giant blocks were actually moved by a lost race of ancient literal giants.

Making the pursuit of answers more frustrating is that there seem to be no Roman written records on the construction of this marvel of engineering, making its creators, methods, and purpose lost to the mists of time and open to debate and conspiracy theories. In the end we are left to wonder who built the Trilithon of the Temple of Jupiter and why? Indeed, how did they do it and why is there no record of it? Was this the work of some unknown Roman method of using applied physics, some previously known technology they had that was well ahead of its time? Was it the work of some lost civilization or even aliens? Why did they stop? There is no real way to know the answers to any of these questions, and Baalbek remains an enigmatic place full of great wonder, historical significance, and inscrutable mysteries.