Encompassing portions of Vermont, Quebec, and New York State, Lake Champlain has long said to have been the home of a legendary lake monster known as Champ. Indeed, reports extend back more than 150 years. Certainly, one of the most fascinating developments in the story of Champ occurred in 1881. That was the year in which a huge skeleton was unearthed by one H.H. Burge. Of this sensational discovery, the May 27, 1881 issue of the Middlebury Register wrote:

“The proprietors of the Champlain Granite Works, located near Barn Rock on Lake Champlain claim to have uncovered a petrified sea serpent of mammoth proportions, being about 8 inches in diameter and nearly fifty feet long. The surface of the stone bears evidence of the outer skin of a large serpent while the inner surface shows the entrails. The proprietors are intending soon to begin excavations along the place where it lies embedded in the dirt and granite, to ascertain its size.” 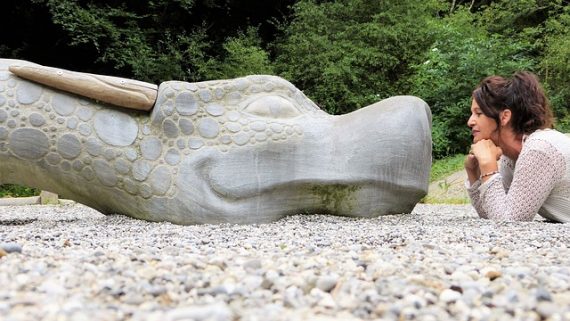 In June 1882, the Elizabeth Town Post & Gazette reported the following:“The report of finding a monster in the limestone deposit of the ‘North Shore’ I heard many times and considered it a story originating with someone anxious to be the author of a sensation. Last summer, a party, part of whom were scientific gentlemen by education and profession called at the cottage and almost demanded admission to the apartments of the monster. The Superintendent was busy at the time superintending his many laborers engaged in the quarry, and told the gentlemen he could not leave his business and go down to the house, and furthermore, he was not prepared to exhibit what he had found, as there was so little of it, but at some time in the future he would be glad to show to all his serpent. I had heard the above from one of the party, and made my mind up to say nothing of the serpent when I went there. Just about to bid the good folks good-day, the Superintendent said: ‘I am not in show business, as many have thought, neither am I showing snakes, but I have something to show you.’

“On the carpet in an upper room lay six or seven feet in length, pieces of an enormous petrified snake. Some portions were six inches long and some fifteen or more. The pieces were placed together and fitted so nicely that was no room for doubt of their having been broken apart. The largest end was eight or nine inches in diameter, and only three or four feet from the terminal of the entrails, and two or three feet beyond. The entrails were petrified, but much darker and quite open or porous and containing many bright and glistening crystals. The vertebra was visible at each broken end, and the flesh part showed traces of what had at one time been veins.

“The skin was readily distinguished from the flesh as would have been had the monster been cut in two whilst living. After an examination of each piece, and comparing the gradual enlargement of the cavity, thickness of flesh and skin on the belly, and the gradual thickening towards the back, left no room in my mind to entertain the thought that it was an accident or freak of nature with molten rock. During this hour of examination at the south side of the window with bright sunlight, the Superintendent had sat quietly and had said nothing but answer a very few questions. I said I did not want to be inquisitive, but would like to know in what kind of rock he was found and his general position. He said he was not in the rock but was merely attached to the limestone, and his position was as if he had placed himself for rest or sleep, and he had traced his body by actual measurement over sixty feet, and his weight to several tons when all removed. The portions the Superintendent has removed he has secured alone, but will be obliged to have help in getting the remainder or leave the monster to rest in his slumber of death. When the proper time comes the scientific men of different localities will be called upon to make an examination and publish to the world their verdict.” 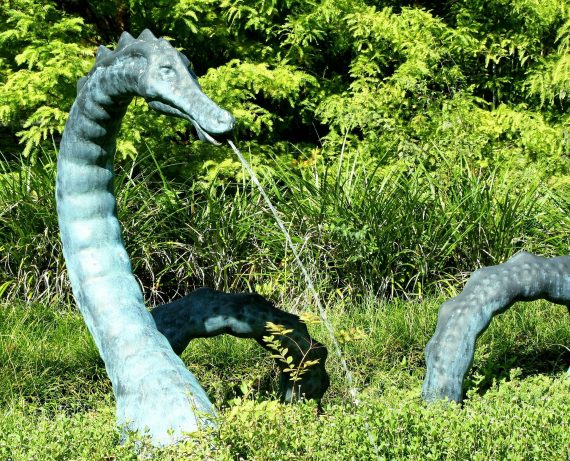 Creature-seeker Richard Freeman says: “The remains are next mentioned in The Burlington Free Press of November 4th 1886 and, apparently, were on show at a bank-sponsored exhibition held in Vergennes, Vermont. They were subsequently purchased by the famous showman P. T. Barnum (1810-1891) for his museum. From then on the specimen seems to have vanished. Searches of Barnum’s records have so far been fruitless. Barnum’s collections were twice ravaged by fire but both of these incidents were before he bought the remains.”

Freeman wonders: “What was the skeleton? Some kind of fossil?” He states: “The strata around Lake Champlain is too young for dinosaurs or their contemporary marine reptiles. Archaeocetes are also much too old for the strata. The only fossil whales that have been uncovered in the area are modern species such as the beluga (Delphinapterus leucas). The presence of skin and soft organs is unusual. These are only preserved under exceptional circumstances. This raises the possibility that it was a sub-fossil or in other words fairly recent in origin.”

A Mysterious Ancient City in Lebanon