Ancient Curses and the Lost City of the Monkey God

Our world seems to be growing smaller day by day. There sometimes seems to be no frontier left on this planet of ours that has not been mapped, explored, and conquered in our constant, inexorable push into what was once in ancient times just vast expanses of black nothingness on our maps, the void of the unknown. It may seem that we have now shone a light into every crack and crevice of the world, yet for all of our discovery there are still places that have managed in a sense to remain in that realm of the black unknown, hiding away from the modern world that hovers on the periphery, growing ever closer. One such place is a legendary lost city entombed within one of the wildest places left on earth, and which holds both ancient mysteries, a mysterious history, and ancient curses.

Carpeting roughly 20,000 square miles of the Central American countries of Honduras and Nicaragua is a vast sea of green called the rain forest of La Mosquitia. It is a forbidding, inhospitable land full of impassable mountains and steep ravines, raging rivers, impenetrable thick jungle full of thorny, flesh tearing vines called cat claw vines, deadly diseases, clouds of hungry mosquitos and other dangerous insects, and wildlife such as snakes, jaguars, and others. It seems in many ways to be a vicious place not meant for us, a land of danger that almost willfully protects and shields itself from the eyes of mankind. Yet there is said to have once been a grand city buried within this perilous domain, a place of grand plazas, soaring elegant buildings, and wide, smooth roads, all supposedly laboriously carved within the hostile landscape by a people intent on taming this wild land, and by many accounts imbued with a deadly and sinister ancient curse.

The mysterious lost city is called Ciudad Blanca, meaning “The White City,” based on the heavy use of gleaming white stone supposedly used in its construction, and according to legend there was a gargantuan statue of a Monkey God buried beneath the sprawling streets, earning it its other nickname “The City of the Monkey God.” In the 1500s, the inhabitants of this mysterious place suddenly abandoned it to be reclaimed by the jungle, and the main reason was said to be a series of calamities and catastrophes that the people believed came from a curse brought down upon them by their wrathful angry gods. Indeed, the people of this once great city vanished quite suddenly, with many of their belongings left behind, never to return. The curse was said to remain there amongst the trees and ruins of what once was, and there were over the years many tales of explorers venturing to it and never coming back.

The once magnificent city went on to become legendary, spurring numerous expeditions into these uncharted rain forests in search of it, sometimes coming back with amazing tales of a city full of white stone and even gold and silver but never with any real evidence, sometimes never coming back at all. Perhaps one of the most exciting findings was in 2012, when filmmaker Steve Elkins used state-of-the-art technology in the form of a groundbreaking mapping system called LIDAR, which employs lasers fired from the air that help to map out the contours of the land and provide a video image of any structures even if they are obscured by the thick canopy above. After scouring the jungle for years they found evidence of what might be manmade ruins out there, including mounds, plazas, terraces, and even what looked like a pyramid, all surrounded by untouched, unexplored wilderness. This was without a doubt an exciting discovery, lending credence to the ancient legend, but considering the formidable terrain surrounding the site, it was not until 2015 that a team would actually attempt to venture out there to the actual spot to see what it was.

This time along for the ride was explorer, journalist, and world famous author Douglas Preston, who despite the spooky legends and pleas from the locals to stay away from the cursed city trekked out through the gloomy jungle along with a team of archeologists, filmmakers, and soldiers, equipped with the most top-of-the-line equipment and technology. The journey into the interior of this lost world was fraught with danger, the expedition dodging lawless drug cartels, fending off poisonous snakes and avoiding myriad other perils. When they finally reached their destination they were amazed by what they found. There, out in the middle of this sea of trees and death in its many forms, were the remarkable ancient ruins of some unknown lost civilization, different from the Mayans who had long ruled the region. Here they found the remains of streets, walls, foundations, and an enormous earthen pyramid surrounded by 52 intricately carved stone sculptures depicting monkeys, jaguars, vultures, and snakes. Preston would say of the sight of this lost city:

I can recall the very moment when we stumbled over the cache of sculptures at the base of an earthen pyramid. I first saw a carved jaguar head coming out of the ground. Gleaming with rain, it rose up snarling, as if struggling to escape the earth. It was an image that spoke directly to me across the centuries — forging an immediate, emotional connection to these vanished people. What had been theoretical for me became real: this spirited image had been created by people who were confident, accomplished, and formidable. Standing in the gloom among the ancient mounds, enveloped in the mist, I could almost feel the presence of the invisible dead.

The stone artifacts are beautifully preserved. The great temples and public buildings of this lost civilization, however, were built out of adobe, beautifully polished tropical hardwoods, and draped with spectacular textiles — all perishable materials. Their buildings and cities may well have been just as magnificent as the cut-stone temples of the Maya. But once abandoned, they dissolved in the rain and rotted away, leaving behind unimpressive mounds of dirt and rubble that were swallowed by vegetation. In the acidic rain forest soils, no organic remains survive — not even the bones of the dead. So in that sense it is not well preserved. However, the city was pristine and unlooted, which is exceedingly rare for any site in Central America. We found millions of dollars’ worth of gorgeous artifacts lying on the ground. They were lying where they were left 500 years ago. This ruin is so untouched. It’s like Pompeii. It’s frozen in time. 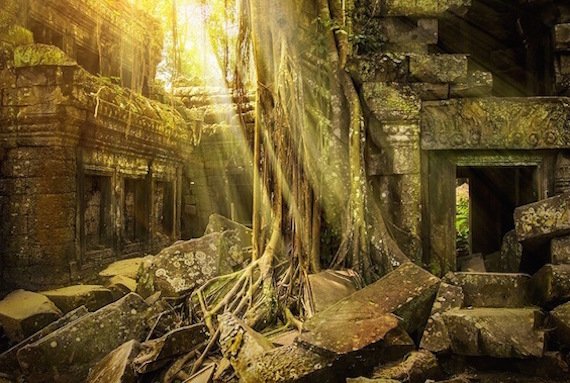 The remains and fragments of over 500 stone sculptures would eventually be found with further examination of the site, a veritable treasure trove of relics, and many of them held inscriptions as well, and most of which are speculated to have been intentionally broken in a mass ritual before the people’s departure from these lands. There were many other artifacts found as well, all dating to around 1000 and 1500 AD and left behind by the vanished inhabitants. As to what in fact happened to this lost civilization, the answers remain murky, and considering that only a small portion of the city was explored there are still many questions. It is thought that they were driven out by some undefined catastrophe, but what that may have been remains unknown. This has led to talk that perhaps the legendary curse was real, and oddly the expedition would encounter a mysterious calamity themselves.

Upon returning home from the rain forest around half of the entire expedition would come down with a flesh-eating parasitic infection known as leishmaniosis, which is contracted through the bites of insects they had encountered during their journey. Preston has described the symptoms rather graphically, saying, “The parasite migrates to the mucous membranes of your mouth and your nose and basically eats them away. Your nose falls off, your lips fall off, and eventually your face becomes a gigantic, open sore.” Although the team had access to advanced hospital treatment and were able to survive, it is disfiguring and fatal without attention, and it is thought that perhaps in ancient times this terrifying disease in the area of the ruins could have been seen as a sort of mysterious curse. Preston himself said of the curse of the Monkey God City:

I’m not really a superstitious person, and I dismissed the legend that the city was cursed. However, after getting out of the area and becoming ill, it made me think maybe the stories were based in reality. The valley is a terrible hot zone of disease, and that fact may have been the source of the legend of the curse.

Preston would go on to publish an article on the find in National Geographic, after which he wrote a whole book on his amazing journey and discovery, called The Lost City of the Monkey God: A True Story. The Honduras government has since swooped in to close the site off from the outside world, ostensibly to protect it from vandals, and considering that the area is so difficult and dangerous to get to in the first place it is quite possible that it may remain an enigma, with only a fraction of its mysteries uncovered. It still isn’t even known if what they found out there in that uncharted wilderness is even the real Ciudad Blanca of legend, but it is definitely the remains of some as yet unknown, unnamed civilization that existed in this harsh environment, and it shows how there are still such places lying undiscovered in this ever advancing world. Preston would say of this:

It is incredible to think that a lost city could still be found in the 21st century, but that is precisely what happened. People feel the world has shrunk. We have trodden upon, mapped, photographed, and exploited every place on Earth to the point where it feels like we’ve robbed the world of its mystery. But this discovery puts some of that mystery back. It proves we don’t know everything, and it shows us there are still places on Earth that are indifferent, hostile, or even inimical, to human beings. Mosquitia is one such place.

Indeed, it is alluring to think that off in the far, unexplored corners of the world that there could still be such amazing discoveries lurking beyond our relentless push to tame and conquer this planet. It is not known if there ever really was a cursed city of the Monkey God, or if Preston and his team actually managed to uncover it, but it is exciting to know that such lost cities and even whole civilizations can remain hidden from us even in these modern times. Whether this new lost city really is the one of legend or not, there is also quite the possibility that the ancient ruins uncovered by the Preston expedition will stay that way, forever sequestered away from our attempts to understand it, an elusive cipher stuck in time in its jungle lair and defying the encroaching modern world around it.