You know, maybe those chemtrail people were right about a few things after all. Maybe they saw this coming. While I’ve never donned my tin foil hat long enough to buy into chemtrail conspiracy theories, a new peer-reviewed study published by two Harvard scientists claims that spraying chemicals out of the backs of planes could actually change the weather here on Earth. Is this what all those theories were warning us about?

Harvard researchers Gernot Wagner and Wake Smith published the study, claiming that wide-scale geoengineering using actual chemtrails is not only technically possible, but inexpensive and definitely feasible. Even more promising (or terrifying), the researchers claim that this technique could be used to increase the amount of sunlight reflected by the atmosphere, thereby cooling the Earth. What could possibly go wrong?

The proposed technique involves spraying sulphate aerosols into the lower stratosphere in order to create a barrier that would repel sunlight, cutting the greenhouse gas effect in half. Similar phenomena occur as a result of volcanic eruptions, so while we know it’s possible, this new study focuses mainly on logistics like the cost of such a program and what types of aircraft might be capable of making these stratospheric flights. 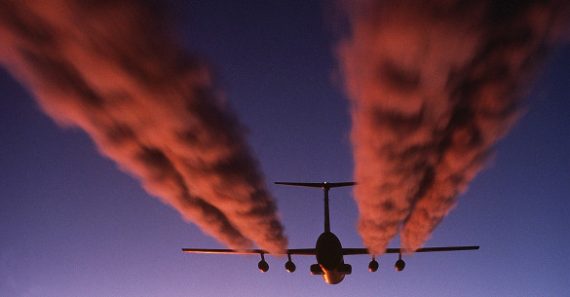 However, right in the introduction, the authors question if such a geoengineering project could be launched without the public knowing about it:

We seek answers to three questions: if SAI deployment were to commence within the foreseeable future with the tools and technologies at our disposal, how would such deployment be physically achieved, how much would it cost, and could it be done in secret?

To further drive home the dystopian foreshadowing, the authors close the study by adding that “any entity that intends to engineer the climate of the entire globe must act—and be seen to act—purely out of humanitarian and environmental considerations unclouded by aspirations of direct financial gain.” Do these guys actually live on Earth?

The authors conclude that keeping such a program secret would be difficult given how much airspace access and international coordination it would require, but even the mention of keeping this program a secret should be great enough for the tin foil types to keep the chemtrail thing going.