MIT Not So Smart — Wants to Attract ETs With Laser Beams

“If we were to successfully close a handshake and start to communicate, we could flash a message, at a data rate of about a few hundred bits per second, which would get there in just a few years.”

And in a few years later? Will a hungry, precious-metal seeking, conquest-minded band of extraterrestrials show up with their weapons, drills and recipe books ready to take over our planet … after first thanking MIT for letting them know we’re here? That’s one scenario that could play out if a Massachusetts Institute of Technology project goes from drawing board to reality. Do we really want to send up a bat-signal for what might be real bat people? What else could possibly go wrong?

“The kinds of lasers and telescopes that are being built today can produce a detectable signal, so that an astronomer could take one look at our star and immediately see something unusual about its spectrum. I don’t know if intelligent creatures around the sun would be their first guess, but it would certainly attract further attention.”

That’s the proposal of James Clark, a graduate student in MIT’s Department of Aeronautics and Astronautics and author of the study, “Optical Detection of Lasers with Near-term Technology at Interstellar Distances,” published this week in The Astrophysical Journal. He even has some targets in mind for the signal – Proxima Centauri b, the exoplanet orbiting in the habitable zone of nearby Proxima Centauri; and TRAPPIST-1, an ultra-cool red dwarf star just 40 light years away which has seven temperate planets capable of hosting life forms that may have evolved astronomers who could be scanning the skies looking for flashing “Come and get us!” signs. In fact, the beam James has in mind could be picked up by ET astronomers making even minor brief scans of the Milky Way.

As his final project for the MIT class 16.343 (Spacecraft, and Aircraft Sensors and Instrumentation), James proposes pairing a conventional infrared laser with a large telescope whose mirror would be used to intensify the beam to up to ten times the infrared brightness of sun, thus identifying it as something out of the ordinary. In the MIT press release, he speculates that either a 2-megawatt laser pointed through a 30-meter telescope or a 1-megawatt laser reflected by a 45-meter telescope could be seen by TRAPPIST-1 or Proxima Centauri planets. Equipment now in existence that could meet those would include the U.S. Air Force’s Airborne Laser (designed to down ballistic missiles) and, while still under construction, the 24-meter Giant Magellan Telescope and the 39-meter European Extremely Large Telescope in Chile.

What could possibly go wrong? One thing you may not have considered is that such a beam would be extremely dangerous to those working and living around it.

“Such a beam would produce a flux density of about 800 watts of power per square meter, which is approaching that of the sun, which generates about 1,300 watts per square meter. While the beam wouldn’t be visible, it could still damage people’s vision if they were to look directly at it. The beam could also potentially scramble any cameras aboard spacecraft that happen to pass through it.”

Not a problem, says James. Just build it on the dark side of the Moon. That would put it in a place where it can’t hurt any humans or their spacecrafts and would make Pink Floyd very happy. 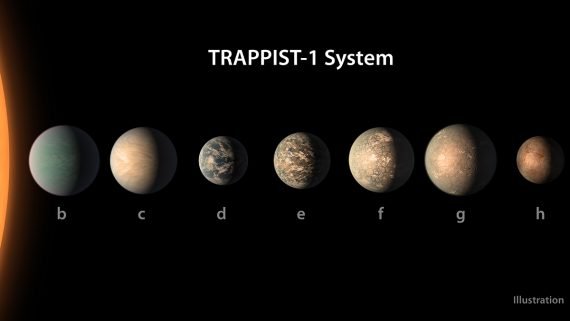 If we can send such a signal to ETs, can we see if they send one back? Not yet, says James. Current imaging technology would require that a telescope be aimed directly at the beam source when it is sent.

So, they can see us with their superior technology, which could be used for spaceships as well, but we can’t see them. What could possibly go wrong?

“Whether or not this is a good idea, that’s a discussion for future work.”

Does MIT have a class on that?