"(using) the Earth itself as the medium for conducting the currents, thus dispensing with wires and all other artificial conductors ... a machine which, to explain its operation in plain language, resembled a pump in its action, drawing electricity from the Earth and driving it back into the same at an enormous rate, thus creating ripples or disturbances which, spreading through the Earth as through a wire, could be detected at great distances by carefully attuned receiving circuits.”

Fans of Nikola Tesla will recognize his description of his dream to build a wireless power supply – a dream that he attempted to demonstrate by building Wardenclyffe Tower, also known as the Tesla Tower, in Shoreham, New York. His funding ran out before the tower could be completed, although shortly after the night in 1903 he received a letter from financier J.P. Morgan cutting off his cash flow, many newspapers reported that Wardenclyffe tower was activated and lit up the sky with bright flashes. It was never turned on again and torn down in 1917. Since then, there have been rumors of Tesla Towers being built, but none has been demonstrated. 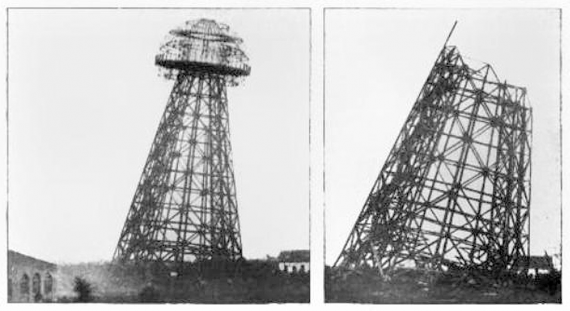 That may change in Milford, Texas, a tiny town (population 747) in north central Texas where a strange-looking tower is suddenly getting a lot of attention. (See a picture here.)

“When did I notice that thing going up behind us? About a year and a half ago. We did think, oh gosh are we going to be the glowing people? But I don’t know, we’ll just have to see.”

Madonna McLeod sounds like the other residents who spoke to reporters at the local ABC news station Central Texas News Now as they investigated reports that the owner of the tower, Viziv Technologies. Is getting ready to fire it up by the end of the year. Fire it up? To do what?

Michael Taylor, a Viziv Technologies representative who spoke to Central Texas News Now, has his “trust us” pitch down pat. No need for foil hats around the Viziv tower because it’s just like a good old TV or cell phone tower … perfectly harmless … move along … nothing to see here.

Except for the Zenneck Surface Wave.

“A Zenneck Surface Wave is an electromagnetic wave that uses the surface of the earth as a waveguide enabling it to carry communications signals or electrical power efficiently over long distances. This wireless power system will employ a “transmitter probe,” located near a power generation plant, to launch a Zenneck carrier wave. Receiver antennae will be positioned appropriately around the world to receive the signal and download the power into a local microgrid or conventional grid architecture. The wave is impervious to weather effects such as lightning or geomagnetic disturbance or electromagnetic pulses (EMP), including those associated with a nuclear detonation. Unlike a wired grid, the Zenneck wave cannot be physically attacked and cyber attacks would be challenged to target or cause cascading failures to a wireless system. When launched, the Zenneck Surface Wave literally envelops the planet like a balloon, enabling transmitter probes to be placed anywhere power can be generated and receivers to be placed anywhere power is needed.”

Words and phrases like “probe,” “impervious” and “literally envelops the planet” literally envelop the mind with “what ifs,” WTFs and just plain “What?” Fortunately, Viziv is a local company headquartered in nearby Waxahachie. They wouldn’t do anything to hurt their Texas neighbors, would they?

“Our first tests won’t include any type of audio modulation or anything of that nature. It will be simply so we can establish the signal, determine how strong it is, and did it fit into our mathematical and computer modeling. It will show us to determine what we need to do to bring us closer to what our computer modeling says it needs to be.”

Taylor gave these reassurances to the good people of Milford in a previous interview over the summer as testing was being planned. Oh, and he left out one big caveat from their website:

“And Zenneck Surface Waves which use the surface of the earth as a waveguide and travel at high levels of efficiency but had yet to be experimentally observed.”

So, Milford, Texas, has a Tesla Tower built out in the middle of nowhere by a small company run by ex-military people and is about to be tested with no one from the Environmental Protection Agency, Homeland Security, any other governmental agency or the media around to observe and ask questions.

Tesla told everyone what he was doing with his tower. Shouldn’t we expect the same from the owners of this new one that will send unproven waves of energy around the world? And even if the testing is just local, don't they know that you don't mess with Texas?