Solar storms have taken root as a modern boogeyman. Solar flares, or coronal mass ejections (CMEs), are fast approaching the top spot in many people's minds as the probable cause for the collapse of society, the end-of-days, and the justification for buying that stupid shovel with the sharpened edge and the paracord wrapped around the handle (no, not the one they sell at Walmart, the nice one).  Maybe it's due to all the technology we're completely and hopelessly addicted to being the prime victims should a solar flare backhand us out of nowhere.

We've spent the last century stockpiling electronics and hurling satellites into orbit and putting increasingly more faith in those satellites and not a lot of time into insulating that network from the inevitable belch of solar radiation coming our way sometime soon. It would be pretty inconvenient, perhaps even society shattering, if that were all to get fried even for a day. But you know what else we've been stockpiling for a century? Bombs! We have so many bombs. If you tried to count how many bombs we have, you'd give up. Because it's a lot.  And if you needed just one more push to get on the solar storm fear-hype-train, here it is. According to U.S. Navy documents from the Vietnam war, a solar storm in August of 1972 detonated 4,000 of the United States' undersea mines. That's right, solar storms are wielding heavy ordinance now. 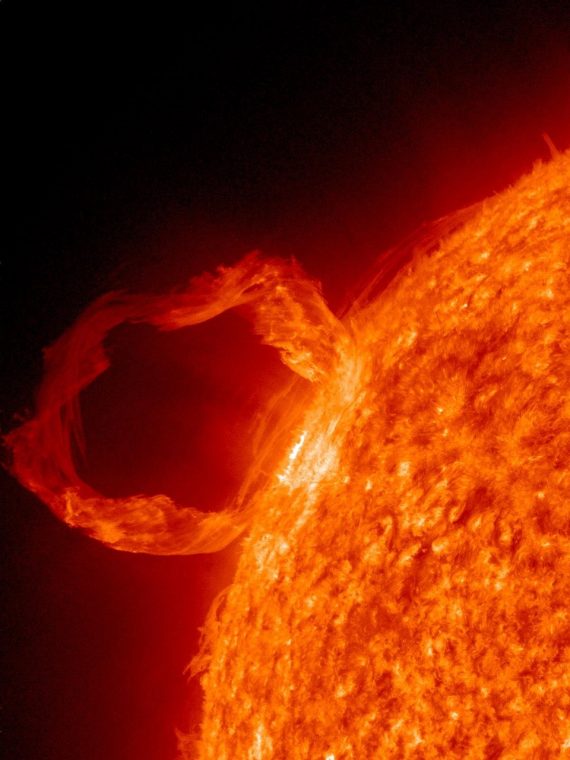 In a recent paper published in the journal Space Weather, researchers dug up Navy records from the Vietnam War to asses the full extent of the solar storm's impact. Here is a passage from the paper detailing the effect of the solar storm on Naval operations

The sudden detonation of a large number of U.S. Navy magnetic‐influence sea mines (designated as Destructors, DSTs) dropped into the coastal waters of North Vietnam only 3 months earlier.... Tucker...wrote that “… on 4 August (1972) TF‐77 aircraft reported some two dozen explosions in a minefield near Hon La over a thirty‐second time span...Ultimately the Navy concluded that the explosions had been caused by the magnetic perturbations of solar storms, the most intense in more than two decades

Further research suggested that the number was actually much higher:

Aerial inspections revealed additional evidence of detonations elsewhere along the coast. The wartime memoirs of a U.S. Navy Mineman‐Sailor, Chief Petty Officer Michael Gonzales, state that “During the first few weeks of August, a series of extremely strong solar flares caused a fluctuation of the magnetic fields, in and around, South East Asia. The resulting chain of events caused the premature detonation of over 4,000 magnetically sensitive DSTs (Destructor mines) … ”

So, how did this even happen and what was the mechanism for the detonation? These undersea mines were equipped with magnetic sensors to trigger their detonation. When a solar flare hits Earth, it triggers a geomagnetic storm. the resulting fluctuations in the Earth's magnetic field were sufficient enough to trigger the detonators.

And that's not all. The August 1972 solar storm also damaged solar panels on satellites in space, caused a "mission-ending" power failure on one defense satellite, and caused Air Force sensors to register that a nuclear bomb had been detonated somewhere on Earth. I'm starting to connect nuclear false alarms and the old children's story "The Boy Who Cried Wolf" and I'm beginning to feel very anxious for some reason.

Due to this event, the Navy replaced the magnetic detonation systems on their undersea mines, and great strides have been made since then, in general, to insulate our technology against solar storms. But is it enough? We won't know till we know, I guess. As a last note—because it wouldn't be doom porn without bringing nukes up twice—this solar storm happened in 1972 and then the Navy stopped using those magnetic sensors, but we built a lot of nuclear warheads before 1972. I'm sure work has been done to stop a solar storm from triggering our nukes' detonators (I have to be sure because otherwise I'll never sleep again), but I think we, as a global society, should agree to begin every single news broadcast, from now on, with a reassurance that the sun can't nuke us.

What is ‘Oumuamua? The Controversy Continues