Here’s today’s easy history test: What year did Russia or its predecessor, the Soviet Union, put cosmonauts on the Moon? (a) 1969 (b) 1968 (c) 2001 (d) trick question designed to make a point about Russia influencing US history books. If you answered (d), do your favorite Captain Picard face-palm as you turn towards Moscow to receive the news that the head of its space program announced the goal of Russia’s first human moon landing will be to verify once and for all (OK, for all Russians and conspiracy theorists) that US astronauts walked on the lunar surface. Really!

“We have set this objective to fly and verify whether they’ve been there or not.”

Dmitry Rogozin, the Director General of Roscosmos, Russia's national space agency, uttered those words during a news conference this week where he discussed his program’s plans to send a Russian to the Moon in the 2030s. (We’ll pause here for a moment while you do the math – yes, this is also a pop math quiz.) Rogozin was born in 1963, which means he was old enough in 1969 to watch the US moon landing, assuming the Soviet media covered it and his family had one of those tiny, crank-operated, government-issued black-and-somewhat-white Soviet television sets. And if he saw that one, he probably also saw the other five, whether it was on the same old TV or on the fancy newfangled color one they finally installed at Roscosmos headquarters to watch “Apollo 13” while planning their own 2030s trip to the moon. 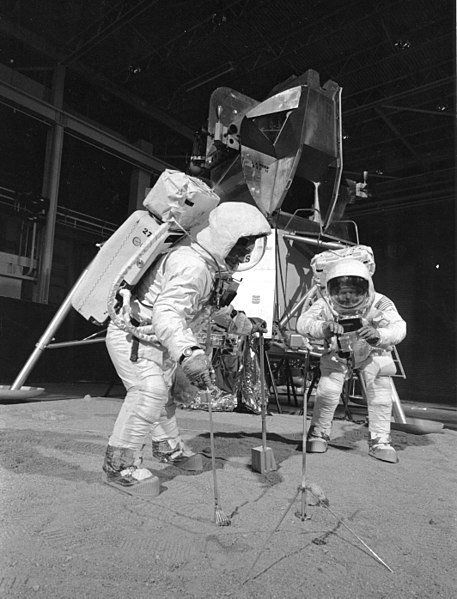 While apologists insist that Rogozin’s body language indicates he was just joking (an affliction that he may have picked up from watching US political coverage with his pals at the Kremlin), he’s not the first Russian government official to question the US lunar landings. In 2015, after NASA admitted that official films of the landing had been destroyed and researchers noticed that many lunar rock samples brought back to Earth were missing, government spokesperson Vladimir Markin had this to say:

"We are not contending that they did not fly [to the Moon], and simply made a film about it. But all of these scientific – or perhaps cultural – artefacts are part of the legacy of humanity, and their disappearance without a trace is our common loss. An investigation will reveal what happened."

We’ll take a moment while you clean up the irony dripping from that statement onto your shoes. True, Roscosmos has earned some snark leeway with its reliable (until they found a suspicious hole in one) Soyuz capsules that are currently the only way to shuttle (remember those?) astronauts and cosmonauts to the Space Station, which conspiracy theorists see as the second-biggest space hoax behind the lunar-landing-was-a-movie one. How do they explain how the US and Russia push their obvious and constant disagreements and outright hostilities aside and find a way to cooperate in a joint hoax? Perhaps the Flat Earthers can help them with some of their diagrams.

Rogozin is not a scientist – space or otherwise – but a career politician. These are the kind of denials that come from putting politicians in charge of scientific research and endeavors. Perhaps we and the Russians aren’t so different after all.

We’ll take a moment while you connect the dots.

A Mysterious Death and a Woman From Nowhere