The photo that captured two breathtaking atmospheric wonders couldn’t have been taken at a more perfect time. The picture caught the incredibly unique moment that the Northern Lights – also known as the aurora borealis – and a ‘moonbow’ were seen together at the exact same time.

The astonishing picture was taken in Abisko in the Swedish Lapland which is north of the Arctic Circle. It was captured by Chad Blakeley who is the founder of “Lights Over Lapland” which helps visitors experience and photograph the spectacular phenomenon of the Northern Lights. “We’ve set up an Aurora webcam giving our community a live feed of images of the night Sky and Northern Lights,” Blakeley explained. And it was when he was reviewing the footage that he noticed the moonbow forming through the Northern Lights. “It was a unique experience for me and I’ve been photographing the Northern Lights every winter for the last 10 years,” he said. 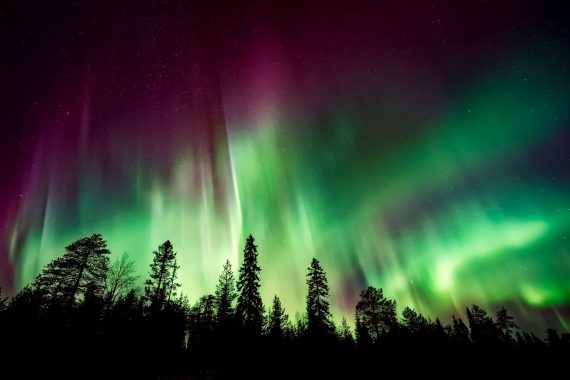 A moonbow – which is also known as a lunar rainbow – works similar to a daytime rainbow except that it needs moonlight instead of sunlight to pass through the water particles in the air. They are, however, seen less often than the daytime rainbows as they need more precise conditions in order to form. They need the light of the full moon to be reflected, as well as the water droplets at a specific angle in order to be created. Normally, moonbows appear white to the human eye although the colors are always there and that’s why long-exposure photos are the best way to see and appreciate their stunning features.

The moon has to be full or very close to being full and it has be located quite low in the dark sky at less than 42 degrees. The rain also needs to fall opposite of the moon. In order to witness a moonbow, you have to have the moon behind you and the best time to observe them is either a couple of hours after the sun sets or before the sun rises. There are certain locations around the world where people have a better chance at witnessing moonbows, such as Hawaii. They have also been around for many years, as Aristotle first mentioned seeing a moonbow in the year 350 BC. 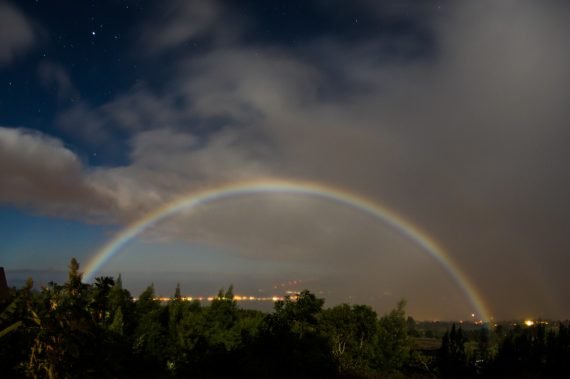 There are two types of Auroras: the Aurora Borealis which means “dawn of the north”, and the Aurora Australis which means “dawn of the south”. These spectacular light shows are created when electrically charged particles from the sun enter our atmosphere on Earth. During strong solar storms, the particles enter our atmosphere and combine with gas particles which includes helium and hydrogen, and that’s what creates the breathtaking light shows. While the Auroras can display many colors, the most commonly seen ones are green and pink.