The Mysterious Code of a Creepy Ancient Statue

Some pieces of history seem to be found purely by chance. These shards of the past lie sequestered away and forgotten, often to just come up to the surface suddenly to present numerous enigmas and puzzles. Often answering few questions, or even generating more, these findings nevertheless present to us a new view of history, and often come in the strangest forms, such as an ancient creepy giant doll pulled up from a peat bog in Russia, which holds a cryptic cipher that remains unsolved to this day.

On January 24, 1894, a very curious oddity was unearthed at the peat bog of Shigir, in Kirovgrad, the Sverdlovsk region, in the Middle Ural mountains of Russia, by prospectors looking for gold. Pieces began to turn up of what appeared to have once been a towering wooden idol of some sort, pulled up from 13 feet under the ground, and a Russian professor D. I. Lobanov would go on to meticulously cobble together the disparate shards to eventually recreate an immense and intimidating statue measuring a whopping 9.2ft (2.8 meters) in height, but it was found to have once even been bigger still when in 1914 the archaeologist Vladimir Tolmachev suggested in his own reconstruction that it would have actually once stood over 17.4ft (5.3 meters) tall, massive for sure. Although Tolmachev went through great pains to sketch all of the individual pieces, some of them were to go missing during Russian's 20th century political turmoil, leaving us with only the drawings of many of these pieces of the idol.

The mysterious idol, often called the Shigir Idol, was carved out of a type of wood called “larch,” and what makes it all rather peculiar is that this particular wooden statue was originally dated by both the the Institute of the History for the Material Culture and the Geological Institute of Russian Academy of Sciences in Moscow, back to the Mesolithic period, around 7,500 BC, making it at least 9,500 years old, and other German teams later found that it was even older still, at around 11,600 years old, which for context would make it over five thousand years older than Stonehenge and more than twice as old as the pyramids. It also makes this the world’s oldest wooden structure, and it is indeed apparently so old and so startling that there was long debate as to whether the dating methods used on it could have possibly been correct. Yet it is indeed of this age, the anti-bacterial effects of the peat it was found in serving to stave off deterioration and make sure that it remained stuck in time, as if an ancient insect stuck in amber, and scientists think that some sort of preservative glue was also utilized by its creators. 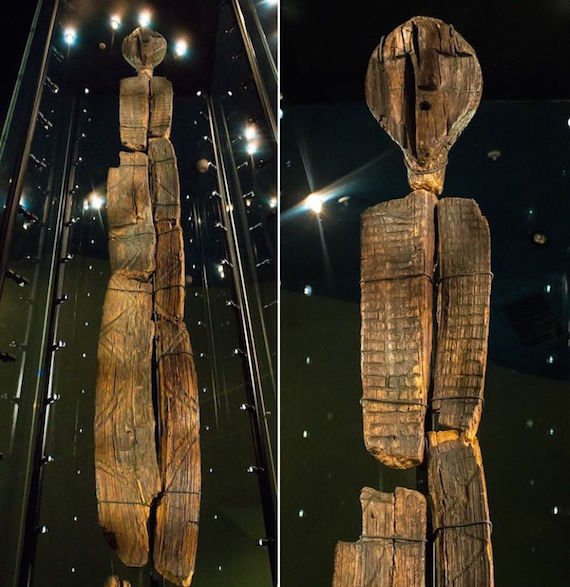 The statue itself seems to have been scooped and molded from a single immense wooden log by ancient hunter gatherers, using ancient tools such as carving instruments fashioned from the jaws and teeth of beavers, as well as at least three different sizes of primitive chisels. In appearance, other than its considerable height, the Shigir idol is flat and rectangular in shape, and seems to be composed of a figure with a total of seven faces, all expertly intertwined together similar to a totem pole, with each face possessing high cheekbones, straight noses, and the main head exhibiting a gaping mouth. Upon the thorax of the statue is a series of horizontal lines thought to represent ribs, and there are numerous patterns of straight, wavy, and zig-zagging lines covering it.

Most mysterious of all are all of the various strange geometric markings and motifs found upon the statue, which are reminiscent of hieroglyphics and are thought to indicate some sort of code, but no one has the slightest idea of what it is supposed to mean, and it has been the subject of quite a bit of debate and speculation. While some have said that it was just decorative markings, this has been challenged by a plethora of theories. One idea is that the odd markings represent some sort of cryptic encoded information pertaining to the creation of the world, and are an example of a very early early writing system. Russian archeologist Mikhail Zhilin has said of this with regards to the statue:

This is a masterpiece, carrying gigantic emotional value and force. It is a unique sculpture, there is nothing else in the world like this. The ornament is covered with nothing but encrypted information. People were passing on knowledge with the help of the Idol.

Other ideas include that it could have been a totem with a warning inscribed into it to keep out, that is was some sort of navigational aid or map, that it depicts mythological creatures its designers believed in, was used for ritualistic purposes, or even that it is a sort of very early precursor to the totem pole that would later be used by Native Americans, perhaps brought by these ancient people over the land bridge. It is speculated that there were probably many more of these mysterious wooden statues at one time, but that without the preservative qualities of the peat they withered and rotten away to be lost to the mists of time, leaving us only with this one enigmatic specimen. In the end, despite all of the speculation the Shigir Idol and its code have remained completely undeciphered, making it the oldest unbroken code in the world, and it is often touted as being “an utter mystery to modern man.” 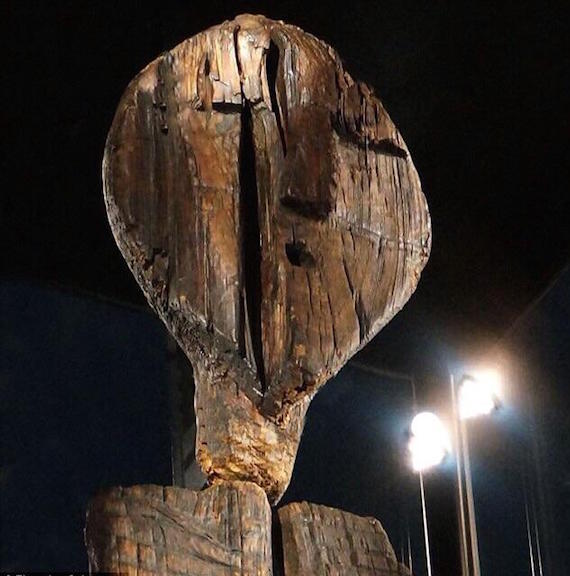 Besides its mysterious code, the idol is exceptional in other ways as well. Up until its discovery it was long thought that such ritualistic artistic representations had first evolved around 8,000 years ago in sedentary farming populations in the Middle East, but the discovery of this statue upends all of that, and shows that these ancient hunter gatherer nomads possessed an ingenuity and artistic nature previously unknown. It has, in a sense, rewritten history as we know it, yet its precise meaning and how it came to be bogged down in that, well, bog, remain unanswered. It is amazing that we even are able to study it at all, considering that it is made of wood, which is one of the least permanent mediums there is, and it makes it all the more inscrutable, of which a Redditor has said of the whole conundrum of the Shigir Idol:

At this point, our best bet is to have something else to compare it to. We figured out cuneiform and hieroglyphs because there were a lot of them. This guy survived as a freak coincidence during a time when apparently everything was made of wood. So unless there are a couple dozen more wooden idols in that peat bog, it'll have to remain a mystery.

At the moment, the idol is kept ensconced within a special glass display case at the Yekaterinburg History Museum in Russia, filled with age-defying inert gases and kept under constant guard. This baffling piece of lost history manages to remain a perplexing mystery, despite all efforts to look into it. What makes it especially noteworthy is that considering its wood construction it should have dissipated under the relentless attack of time. What can we pry from it? What understanding can we hope to achieve by studying it? What secrets lie there etched upon that wood which has sat there in that bog since time unremembered? We may never know.

UFO Hunter Unveils the “Skull of an Extraterrestrial”