The Mysterious Icelandic Cave of the Fire Giant

Even as our world moves on and charges out into the future there are some places on our planet that have mysteries and secrets firmly and adamantly buried in the past, hiding away from the light of discovery and the eyes of civilization. Such locations and their ancient peoples, when uncovered, often serve to baffle and confuse, as we try to piece together a picture of them and look into their strange world with only the fragments and pieces they have left behind. Out upon a remote and lonely expanse of Iceland lies one such place, an ancient cave steeped in legend, myth, and unsolved mysteries.

Out across the cold landscape of western Iceland, just a few hours’ drive from Reykjavík, lies a vast field of lava tubes called Hallmundarhraun, which sprawls out over 90 square miles of desolate rocky terrain. Here is a barren looking, bleak volcanic realm of craters, smoking fissures, and networks of caves and various lava tubes forged by gurgling fresh molten rock long ago snaking out into the earth, and the whole looks very much like the surface of some alien world. Looking upon the eerie beauty of this place it is easy to understand why this land once inspired myth and legend, and indeed the Vikings who first laid eyes upon this domain of fire and ice starting from the 8th century would have likely been unfamiliar with such volcanic power, held enthralled by the scope of it all, their legends and mythology subsequently forged by it all. The legends associated with this place are reflected in the name of the longest of Iceland’s lava tube caves, Surtshellir, named after Surtr, the Norse elemental fire giant of myth, often also known ominously as the “scorcher” and “blackener,” who was prophesized to be the one who will at Ragnarok at the end of time to raze the earth with a fiery sword and destroy all life. 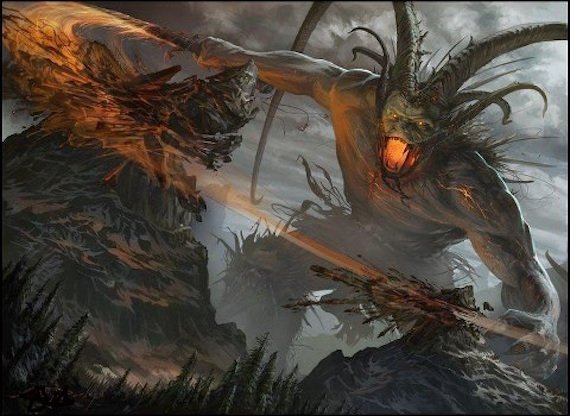 The cave Surtshellir stretches into the earth for about a mile, with jagged walls that can span up to 40 feet in diameter, and with a ceiling that ranges from 2 to 10 meters in height. It is a spooky and rather treacherous place to enter, its floor eternally covered in ice and sharp volcanic rock, all enveloped in perpetual darkness occasionally sliced though by light stabbing in through several natural skylights caused by ancient cave-ins. Throughout the complex can be found lava tubes, natural caverns, eerie cave formations known as speleothems, and the side caves Vígishellir, meaning “Fortress Cave,” and Beinahellir, “Bones Cave.” It is all a rather breathtaking view to take in when illuminated, but besides its unearthly beauty Surtshellir is also known for its many legends, colorful history, and ancient mysteries.

The Norse people of the region long considered it to be a land of lumbering Jotnar, or giants, and the dark confines of Surtshellir to be the lair of evil spirits and ghosts, and those who would penetrate down into the gloom were often warned away as those who entered were said to never be seen again, taken away to be devoured by these spirits. Old legends even claim that the mighty fire giant Surtr himself resided here in the depths, along with his devastating powerful sword of fire and will to destroy all he sees. This talk of vengeful supernatural forces did not dissuade outlaws in the 10th century from supposedly using the cave as a place to band together and eke out a living despite the scary myths or perhaps because of them, as who would willingly go looking for them in a haunted cave? Banished from society, these outlaws then are said to have fortified the caves, made them a home, and used this place as a base of operations from which to make raids into nearby farms and towns, taking their loot and livestock to scurry away back down into the dark, dank depths.

These outlaws apparently left behind evidence of their existence in the form of numerous bone piles found throughout the cave, always from domesticated animals and every last bit of marrow removed and the bones oddly not scorched by cooking fire, as well as various manmade objects such as doorways and fortifications. However, for as interesting as this history as a bandit hideout is, there are deeper archeological mysteries to be found here in the cave of the fire giant as well. One such mystery is the presence of a massive wall measuring 40 feet across, 15 feet high, and composed of enormous stones, each around 4 tons in weight. It would have most certainly have been a daunting project to undertake in the cold eternal blackness of the cave, and archeologist Kevin Smith, from Brown University, who was one of the first real researchers to investigate Surtshellir along with colleague Guðmundur Ólafsson, has said of the enigmatic wall:

This would have been raised in the dark, well above people’s head height, totally sealing the cave. There’s not a doorway through it, there’s not a ladder way up through it … It’s the largest stone construction from the Viking Age in Iceland. The amount of labor and effort that had to go into the construction of this wall suggests that it is the work of many men and that it probably served as a fortification to stop intruders.

Would a rag tag bunch of outlaws really go through all of the effort to build such a wall, and if so how did they do it? No one really knows. Within the cave is also another inscrutable and enormous manmade structure in the form of what seems to be some sort of hall, with entrances on each side and niches carved into the walls for unknown reasons. There is also a strange oval arrangement of stones in the side cave called Vigishellir, 22 by 11 feet in dimension and with the stones piled a few feet high, arranged in a pattern reminiscent of the shape of a Viking ship, beside which was a pile of animal bones that had been broken and hacked up. The anomalous structure looks almost like it could have been some form of enclosure, perhaps even a house or an area for gatherings or rituals, but no one really knows for sure, adding to the mystery and allure of the cave.

Further fueling the mystery of the cave are some of the other various artifacts that have been uncovered here. Among these are the various Viking-era beads that were found, and in fact the cave would turn out to be, as Smith says, “one of the largest assemblages of beads at any site in Iceland other than burials.” The green, blue, and yellow beads were found to have been coated with a very rare and expensive arsenic-based yellow pigment, not found anywhere else in Iceland, and there were no black beads. Why were they here, and why no black ones? Who knows? Other items found were what are called “jasper fire starters,” a sort of early version of matches, as well as a set of lead weights with a total weight of 26 grams and of the type normally used as a standard for weighing payments in legal transactions in the Viking days, and perhaps strangest of all one of the lead pieces was in the shape of a cross, a very rare and early sign of Christianity in this snow swept isolated land. It was also found that the fragments recovered from the various bone piles scattered about had been composed of hundreds and hundreds of animals and deposited over the course of approximately 80 to 100 years, making it all rather odd indeed.

An interesting find by Smith and his team is that, although Surtshellir is said to have been inhabited by humans there is very little evidence to show that this was ever a permanent residence at all. There is very little evidence of fire usage, no food preparation equipment or storage areas, no water collection sources nor any means to transport and store water, and a complete lack of latrines, or clear areas in which to sleep, just those enigmatic structures and the piles of bones. Considering this lack of any sign of the basic necessities for permanent habitation, it seems that the cave was likely only used on occasion and for short lengths of time, but why is this the case?

All of these odd discoveries have suggested that, while the mysterious cave may have very well once been used sporadically for outlaws to hide out in, there is also perhaps something more going on here although no one is really sure of what that might be. One theory is that the cave was used for pagan or cult rituals, with the strange enclosure and other structures having ritual significance and the animal remains the result of sacrifices. The very valuable beads could have also been offerings in these rituals, and the formidable wall could have been to keep people out so the cult could work in secrecy. The Norse people of the time had a complex mythology of gods, giants, and spirits, and considering the importance of Surtshellir in the stories of the fire giant Surtr and his connection to the end of the world, Ragnarok, perhaps these rituals were to somehow contain him or appease him, or conversely to seek protection from Freyr, a Norse god of fertility and Surtr’s enemy, who also features prominently in Ragnarok. Smith himself believes that this purpose of ritual was the case, and has quipped, “The punch line is that it worked. The volcano never erupted again.” He has further said of the pagan ritual theory:

In my opinion, that story gives the best explanation of all the finds, but it seems that it’s much more complicated than we thought in the beginning. I don’t think we have the answer yet.

Whatever the case may be, it does seem that there was something more to this majestic cave and its mysterious trove of enigmas than merely just bandits and outlaws hiding out. However, what this may have been has ultimately remained an impenetrable mystery leaving many questions swirling about with few answers. Who built the structures within this cave and why? What is the significance of the beads, firestarters, weights, and bone piles? What do they mean? Why is there no sign of permanent habitation? Was this used as a hideout for outlaws or a ritual space for secretive cults working their arcane magic down there in the dark? Perhaps more mysterious is why would anyone at all trudge across the remote moonscape of this charred, melted land of lava and angry giants just to use this cave in the first place? For now, it is unknown, and out here in this land of ice and fire, this realm of ancient legends steeped in magic and myth, Iceland’s largest lava cave remains its most mysterious as well, keeping its secrets buried there in the dark as it always has.