Sprawled out across a portion of the northern Mojave Desert of California, in the United States, is the magnificent yet forbidding moonscape that is Death Valley. This is one of the hottest, most inhospitable places on the planet, boasting the highest ground temperature ever recorded on earth at 201 °F (93.9 °C), and in general a sun-scorched wasteland, devoid of water and pounded by relentless sun and heat. It is so inhospitable that it might as well be the surface of some remote, lifeless planet, and it is not called Death Valley for nothing. Yet, for how totally uninhabitable it may seem there have long been Native tribes living in this extreme land for thousands of years, and it some reports are to be believed there is even a mysterious lost civilization that lived under it all.

The tribe most associated with the Death Valley region is the Paiute, who like many other tribes throughout the world have their particular legends and myths about the land they inhabit. For the Paiute one of the most intriguing is that of a great underground city they call Shin-au-av, meaning “God’s Land” or “Ghost Land.” According to the lore, there was once a great chief who lost his wife to the clutches of death. Unable to cope without her, this chief took a journey to the land of spirits, during which he found himself in a vast subterranean world. In this land he was attacked by horrific monsters, which he barely managed to fend off as he retreated, finally crossing a rock bridge and coming to a peaceful land ruled by a chief called Shin-au-av.

This was apparently a land of lush green meadows, sweeping valleys, and dancing, happy people, and the chief who had stumbled across this magical place realized that is was a land of spirits, possibly even harboring his dead wife. He even asked if his wife was there, and one of his guides said that she indeed was, and that she would be presented to him with the caveat that he whisk her away as soon as possible without looking back. The chief was elated, but after waiting several days she did not materialize. He was about to give up but then she appeared and he did as promised, taking her by the hand and leading her across that stone bridge back to the land of the living, but he broke his pact by looking once more onto that sumptuous realm of green and his wife subsequently faded away once again. The heartbroken chief made his way back to his village, but he was never the same again, and his tale of that amazing underground domain became the stuff of legends.

Whether this fantastic fable is based in any way in reality or not, there have actually been explorers and adventurers who seem to have stumbled across this seemingly mythical place buried under the harsh hellscape of the Death Valley above, and whether connected to this legend or not there have been many who have claimed to have found something quite odd there under the parched earth. One of the earliest such accounts comes from the early 1900s, when two men named White and Thomason were said to have been hiking through Death Valley and one of them allegedly fell through the ground into an old mine shaft at a place called Wingate Pass.

It turned out that there underground was a gigantic cavern that they claim to have followed for 20 miles beneath the earth, where it penetrated out under the Panamint Mountains. According to them, this meandering, expansive cavern emptied out into a vast and ancient subterranean city, which had long since been abandoned but which still held much evidence of its past residents. White and Thomason said that they found perfectly preserved mummies wearing leather clothing and gold jewelry down there in the dank depths, as well as gold spears, a polished stone round table of some sort, golden statues, and just generally gold lying all over the place, as well as countless gemstones. Throughout all of it was an intricate lighting system that they speculated harnessed natural gases, and immense stone doors that seemed to have once been operated with elaborate mechanical systems. 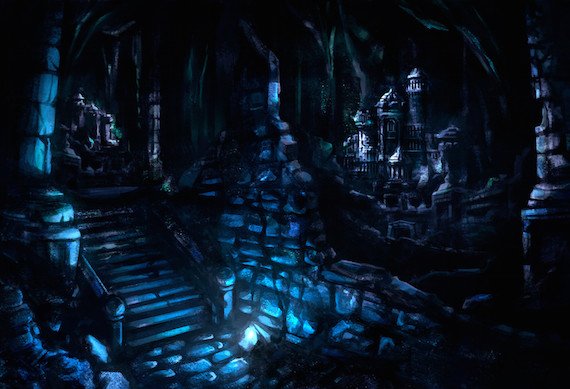 The men claimed to have taken some of the treasure and relics out of there so that they could be studied, but that they had been subsequently stolen by an associate. They captured the attention of the Smithsonian Institute, and promised that they could show them where the entrance to this bizarre underground world was, but the men were unable to locate it again. Considering there is absolutely no evidence of these men’s claims, we are left to merely speculate as to how much truth any of it has.

In the 1920s there was another interesting account when a Native Guide named Tom Wilson came forward to claim that his prospector grandfather had also found some sort of underground city under Death Valley. Wilson said that his grandfather had followed a cave down into the earth, where he had come across a city of fair-skinned people living there underground, who spoke a language he could not understand and were decked out in leather clothing of some sort. This strange race had horses down there, and the whole city was lit up by some sort of lighting system he could not comprehend. Interestingly, Wilson would hear the earlier account of the explorer White and would go on to spend the rest of his life obsessively looking for the lost city without success until he passed away in 1968.

In 1947 the mysterious lost city of Death Valley captured the public imagination when a man named Howard E. Hill came forward with a rather bizarre tale of his own, which was circulated in the newspaper The San Diego Union. Hill told of a man named Dr. F. Bruce Russell and his colleague, an archeologist named Dr. Daniel S. Bovee. In 1931, Russell was claimed to have discovered a complex network of subterranean caves, which were stumbled across completely by accident while sinking for a mine shaft to make a claim on. The two men went on to explore these uncharted tunnels and found a series of spectacular caverns and catacombs down there in the gloom, which revealed some rather startling discoveries indeed. 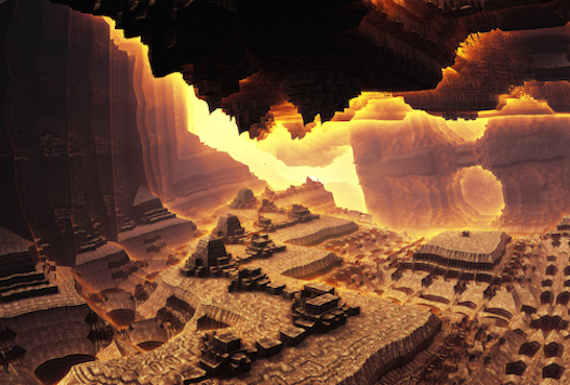 According to the report, Russell and Bovee came across the mummified remains of three actual giants in the darkness, each measuring a purported 9 feet tall and wearing clothing that appeared to be jackets and knee length trousers made of some sort of unknown animal skin. The chamber that the giants were found in was allegedly full of relics that seemed to be some sort of mix of Egyptian and Native American design, and there were apparently hieroglyphics etched into the walls and ceiling. The men also found some sort of hall that they believed had been used for mysterious rituals, and within this hall were the remains of numerous animals presumably used for sacrifices, including both known and unknown animals, as well as the bones of extinct animals such as mammoths and even actual dinosaurs, as weird as that may seem.

Russell supposedly claimed that the remains were dated to be at least 80,000 years old, and that the whole complex meandered out into the unexplored dark for miles, with no telling what else lie within the unexplored murk. Although the two tried to get interest from the scientific community they were perhaps not surprisingly looked at with quite a bit of skepticism, with all of this talk of giant bones and dinosaur skeletons in an underground city. Yet they were apparently adamant that it was all real and that it was the discovery of the century. The two were finally able to draw some interest, but when they tried to find the entrance again they of course could not. Rather bizarrely, not long after this Dr. Russell and Bovee just suddenly vanished, and Russell’s car would supposedly be found abandoned in the desert of Death Valley several months later with no sign of its occupant.

There have been sporadic reports since of finding anomalous caverns and ruins down there in the earth below Death Valley, and we are left to wonder what it all means. Was there ever an ancient underground city here or is this all just myths and folklore? What of the findings of these explorers who have claimed to have been there? What is the significance of the mummies or the bones? It is a hard case to really get a bead on, and for now we are left to merely wonder if down in the depths below the unforgiving remote desert of Death Valley there is some ancient mysterious city lost to time.