One of the most haunted houses in America is all decked out for the holidays. Located in San Jose, California, the Winchester Mystery House is a well-known tourist destination that attracts visitors from all over hoping to catch a glimpse of the many ghosts that inhabit the mansion. And it’s not just the spirits that attract so many tourists, the confusing architecture of this 24,000 square foot mansion leave people speechless, such as the maze-like hallways, stairs leading nowhere, and doors with solid walls behind them. 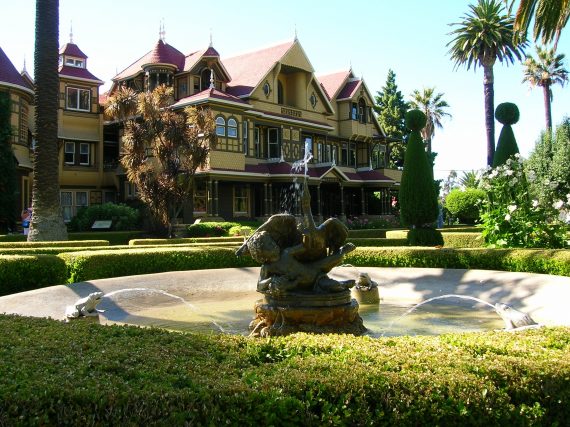 The history of this enormous house began as a simple eight-room cottage that was purchased by Sarah Winchester – the heir of the Winchester rifle fortune. However, she was led to believe that the ghosts of all the people who were killed by the Winchester rifle were haunting her, so she decided to hire workers to do construction on her house…24 hours a day for 36 consecutive years until her death in 1922. In fact, she held séances each night at midnight to contact the spirits and ask them what kind of building instructions she needed to tell the construction workers the following day. Oddly enough, Mrs. Winchester’s séance room had one entrance, but three exits.

Sarah believed that she could confuse the spirits by creating such confusing architecture in the house that they wouldn’t be able to find her. In addition to having doors with walls behind them, other doorways open up into much larger or smaller rooms than the one previously entered. One of the creepiest places in the house is on the second floor where a door leads directly outside to a two-story drop straight down. It's cleverly named the "Door to Nowhere". And some of the hallways and stairs lead to nothing but dead ends. In fact, some stairways even lead up to the ceiling. 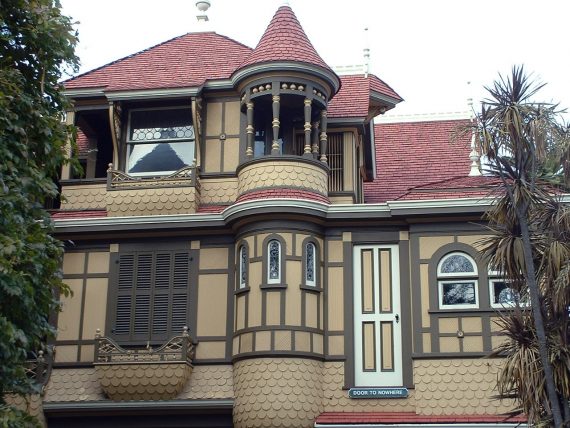 As for the ghosts residing at the mansion, numerous employees and visitors have experienced paranormal events happening there, such as hearing disembodied voices, as well as capturing unexplained images and orbs in pictures they have taken. The most commonly seen ghost there is a man in the basement who is wearing white overalls and pushing a wheelbarrow.

Now, one of the most haunted houses in the country is all decorated for Christmas. From November 16th until December 31st, this mansion will feature holiday-themed tours with Victorian holiday traditions; along with festive lights and ornaments on display, as well as 13 Christmas trees located around the house, and of course there will be music.

Other special events include “Breakfast with Santa” where guests can enjoy a holiday breakfast meal, as well as listen to stories from Santa Claus himself. And it’s not Christmas without gingerbread houses, so naturally there will be “Gingerbread House Building” events.

While the Winchester Mystery House is so haunted that it would be the perfect place to visit for Halloween, the fact that it’s now currently all decorated for the holiday season is somewhat unnatural. And although there are festive lights and beautiful Christmas trees around the house, that doesn’t mean that the ghosts won’t come out and perhaps even play a holiday prank on visitors.

Researchers Claim to Have Found Atlantis On the Coast of Spain