A Strange Code and the Baffling Death of Günther Stoll

One of the strangest murder cases there is began in 1984, when a normally mild-mannered former food engineer in Germany named Günther Stoll began to display some rather erratic behavior. Seemingly without warning he became convinced that he was being followed and constantly watched by shadowy figures who he referred to merely as “them.” He told his wife about these strangers and although he wasn’t able to describe their faces or understand who they were, he was adamant that they were a sinister force that were out to get him and meant him harm. Stoll had recently lost his job and was unemployed at the time, so considering this his wife at first dismissed it as just the effects of stress, but as Stoll’s paranoia became more intense and pronounced she began to worry that something was seriously wrong with him. Little did she know at the time that this would escalate into one of the weirdest, unexplained, unsolved deaths in German history, full of mysterious strangers, indecipherable codes, and plenty of bizarre clues.

Stoll's condition got worse, to the point that he was afraid to even leave the house out of fear of the strangers he was certain were out there waiting for him, and it all reached a bizarre crescendo when on the night of October 24, 1984, he was relaxing at home with his wife on an otherwise relaxed night and suddenly shattered the quiet when he leapt up to shout “Now I’ve got it!” before hastily scrawling the letters “YOGTZE” on a piece of paper and then just as quickly crossing them out. He then shot off into the night without explanation, got into his car, and drove off to a bar he regularly frequented, where things would get even stranger still. According to witnesses, Stoll was not drunk when he entered the bar and sat down to order a drink, but before he had even taken a sip of the beer he had ordered he oddly stumbled and fell over face first onto the floor, sustaining minor injuries in the process, before getting up and wandering back outside to drive off as baffled bar patrons looked on.

Stoll then disappeared into the night for around 2 hours, until he appeared again without warning at Haigerseelbach, the town where he had grown up, and went to the home of an elderly woman who he’d known for years. Since by now it was 1 AM, the startled and not a little unsettled lady sensed something was off and did not invite him in, but rather told him to go home to his wife. Stoll then mumbled something about the horrible accident he predicted would happen to him later that night and stumbled off back to his car in a sort of daze. He did not end up going home, and once again disappeared for a few more hours during which no witnesses remember seeing him anywhere.

The next anyone would see of him was at 3AM, when two truckers found Stoll’s trashed Volkswagen in a ditch by the side of the highway, the Autobahn A45, about 60 miles away from where he had last been seen. Inside the car, Stoll was still alive, but seriously injured, bloody, and rather oddly completely naked. He was barely conscious, but was able to tell the bewildered truckers that he had been travelling with four other people, but that they had beaten him and then abandoned him and his car. The only information he gave was that there had been four of them, they were men, that they had run off into the night, and that they were not friends of his. Any other details Stoll took to his grave when he died in the ambulance on the way to the hospital, leaving in his wake a profound mystery that has not been solved to this day.

When police began investigating the strange death there were immediately odd little details that began to come out. The truckers would testify that they had seen a person wearing a white jacket, possibly injured, who had been running away from the area when they had pulled up to the scene, although what the mysterious figure had to do with anything was unknown, and there was another witness who said he had seen a hitchhiker in the area at around the time of the accident. Even more bizarre was that it was found that Stoll had not suffered his injuries in the crash into the ditch or even in his car, but rather had been directly hit by a different car at another location, after which he had been moved to his own car, driven to that ditch, and then left there alive to slowly die. Investigators concluded that he had been already naked when he had been struck by the car, for reasons unknown.

Adding to all of this was his odd behavior, quirks, and paranoia in the weeks leading up to his death, his sudden outburst before leaving his house on that fateful evening, his odd incident at the bar, his seeming premonition of his own death that he told his elderly childhood friend, and the cryptic note he had jotted down only to scribble out. What did "YOGTZE" mean, and why had he written it down only to immediately cross it out and go careening out into the night and to his mysterious death? This puzzling note in particular is seen as a very intriguing piece of the puzzle as no one has any idea of what it is supposed to mean or what connection it has to any of the other bizarreness that followed. It is not even known if the O, G, and Z in the note are actually a 0, 6, and 2. Is it a license plate number or meant to be read upside down as many suspect, or perhaps some mysterious anagram? Or is it just the random ramblings of an unstable mind spiraling into madness? No one knows.

There have been quite a few conspiracy theories and a lot of speculation on what happened that evening. One of the odder of these is that Stoll had somehow stumbled across a secret project for genetically modifying food at his job, and that he was silenced. In this case, YOGTZE is seen as an anagram for “zygote,” which seems to be grasping at straws a bit, and the white-jacketed man seen by the truckers one of those in on it all. It still doesn’t explain why Stoll freaked out in the bar, or why anyone would strip him naked and then kill him in such a convoluted way, running him over with a car and then putting him back in his own car, while he was still alive for that matter. It seems like a pretty round about, inefficient way to off someone. 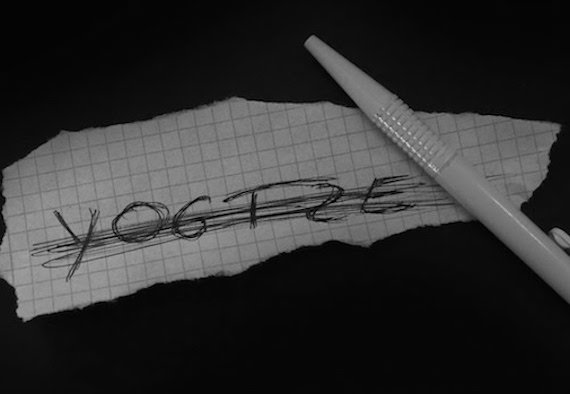 Another theory is that Stoll had had a psychic premonition of his death, and that YOGTZE was the license plate number of the car that would later kill him. His grim and inexplicable knowledge of this inexorable doom perhaps was jarring enough to create his mental disturbances, and it would also explain why he had told the elderly woman in his hometown that a terrible accident was coming hours before his death. Again, though, even if he was psychic or had a vision of some sort we are still left with the questions of who those people in the car with him were, why anyone would kill him, and why he was moved naked back to his own car while still alive.

In the end we have no idea why Stoll wrote that strange note or what it meant, or why he fell at the bar, why he died the way he did and ended up in that ditch, or who would want him dead. There have never been any suspects arrested, the note never satisfactorily deciphered, and the man in the white jacket, the other four passengers, and the hitchhiker never identified. The case has become one of the weirdest unsolved crimes in German history, has appeared in countless books and TV shows, and yet is a complete puzzle that no one has been able to piece together. Considering there is absolutely no other new information, evidence, or witnesses to the crime, it seems that we are left in the realm of questions and pure speculation, the details and bizarre hints creating a murky surface through which we cannot peer any further, and the only person who really knows what happened on that tragic night being Günther Stoll himself.

Fish Fall From the Sky in India