Is there anything as cartoonishly misunderstood as the ninja? Ninjas have been a staple of pop culture for hundreds of years in Japan—folktales and myths about wily and superhuman ninjas first appeared during the Edo period of Japan—and in the west since we found out about the mysterious ninjas. A lot of us grew up watching TV shows and reading comic books about ninjas, most notably a group of ninjas who were also turtles named after famous Italians. Not to disparage the Teenage Mutant Ninja Turtles in the slightest, they remain a bunch of cool dudes, but it highlights how our perception of the historical ninja is truly ridiculous.

Not that we had much of a choice. The only source for our knowledge of the art of ninjutsu—the way of the ninja—were the Japanese folk tales and apocryphal stories of an order that valued secrecy above all else. Much of the ninja traditions and practices were never documented, but were only passed down through oral tradition. It's only now, in 2018, that we have an actual document detailing the oath sworn by those who hoped to become ninjas. The 300-year-old handwritten oath was found among 130 other centuries-old documents donated to the International Ninja Research Center at Mie University in Japan by the descendants of the author, Inosuke Kizu.

The oath was likely written by Kizu after he had completed his initial training and was about to be initiated as a full fledged member of a ninja clan. Kizu begins by thanking his master for training him in ninjutsu. Contrary to popular belief, ninjutsu is not a specific martial art, but rather an art of intelligence gathering, surveillance, espionage, and military strategy. Kizu vowed to never share any of his training with even his closest family members, and he vowed never to use his training to steal, unless he was ordered to.

According to Yoshiki Takao at the International Ninja Research Center:

"Thieves and Ninjas did the same thing -- sneaking into other people's houses -- but Ninjas prized morality highly. Ninjas were 'public servants' in today's terms, providing security services and collecting information."

In the oath, Kizu also vowed to alert his superiors to any new techniques, tools, or weapons he discovered that were not already in the "Bansenshukai," a collection of ninjutsu knowledge that remains undiscovered, and also vowed never to show the samurai who would eventually employ him more than three chapters of the Bansenshukai. 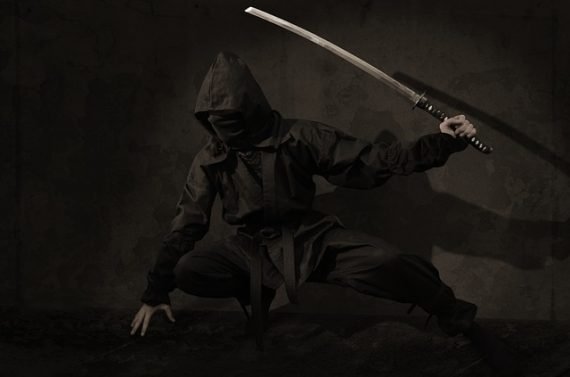 The punishment for breaking these vows was severe and dramatic in a way only the Japanese can come up with. In the oath, Kizu affirmed that should he ever break his vows, divine wrath would be visited upon him and his entire family for generations by "big and small gods in more than 60 provinces across Japan." That does beg the question, are there any safe provinces? And should his family move there now that they've spilled the beans?

While there's still more that we don't know about ninjas than there is that we do, this oath is unique and fascinating in that it shows that not only were there actual ninjas, but they were actual people as well. Not turtles.

Giant Hidden World of Intraterrestrials is Living Underneath Our Feet