What’s your biggest complaint about most alleged Loch Ness monster sightings? Photo too blurry? Looks fake? Witness not credible? Too much like the classic (and proven hoax) image of a dinosaur-like creature? Never close enough to hear anything? Then this latest sighting in a record-breaking year of Loch Ness monster appearances is for you. An experienced tour guide and writer took a pretty decent picture of something that he described in great detail as being more like a smallish (4-foot neck) mini monster that leaned more towards prehistoric aquatic bird than plesiosaur. The witness also heard a strange breathing sound days before which was coming from a grey creature he saw briefly in the same location. Is this the real deal at last? Are there more than one kind? Have people been looking for the wrong monster?

"The previous Wednesday I had heard a strange noise as I was stood by a cafe at the edge of the loch in Fort Augustus. The noise sounded almost metallic, but like something was blowing air - like Darth Vader. I have swum and sailed with whales and dolphins, seen hundreds of seals, and it sounded like nothing I have ever heard.”

Ricky D. Phillips, a historian and best-selling author of “The First Casualty: The Untold Story of the Falklands War” and other books, should know strange sounds when he hears them since he’s also a Loch Ness area tour guide and spends a great deal of time there. He told the Daily Record that his first encounter was a strange audio one … until he saw “something grey, just a side of a body and a flipper,” before it disappeared. 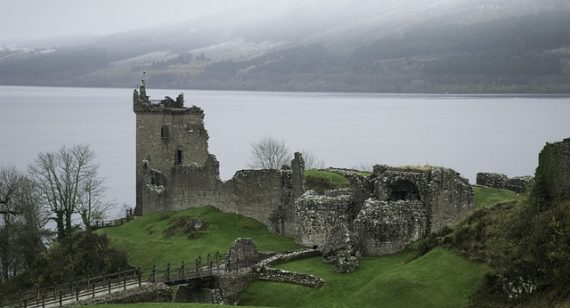 Eight days later, he put his tour group on a loch excursion cruise and was taking a fish-and-chips break at the same location at the spot where the River Oich flows into Loch Ness when he heard another strange noise. At that time he had finished lunch and was walking and taking pictures with his phone.

"I looked up from my phone and saw a long, straight neck, all completely grey, and a narrow face, which was only about 20ft away and then it turned and disappeared all in a few seconds.”

Luckily, he had been shooting in the direction of the creature when he heard it and captured an image on the phone. (See the photo here.) At 20 feet away, he had a good chance to commit details to memory that weren’t readily apparent in the picture, although they can be seen after he described them.

“It actually looks like a giant bird or a peacock in the face, with high ridges above its eyes and what almost looks like a beak.”

He later told Gary Campbell, the keeper of the Official Loch Ness Monster Sightings Register, that the head was “the size of a rugby ball, all completely grey, and a narrow face.” (See photos of the creature and Phillips here.) Yes, Phillips knows the big complaints too

"All I will say is that, if I was going to fake a Nessie, I would certainly have made it look less like a bird and more like... well, more like what we think Nessie looks like!"

So, what is in the photograph that Ricky D. Phillips claims is the Loch Ness monster or some sort of bird-like mini-monster that happens to reside in the Loch Ness? Gary Campbell likes it – "Mr Phillips is an experienced tour guide and historian who knows the area well and this gives it extra credibility.” Then again, it’s those record numbers of sightings that keep him and the rest of the Loch Ness in business … including one particular tour guide. Unfortunately, he left out some details. How did the creature disappear – did it sink with a splash? Was there a wake? Did it look like the heavy breather from the week before? Phillips seems to be getting a kick out of the attention – on his Facebook page he writes: “Apparently I'm "respected"??”

Well, a respected author at least. His book on the Falklands War does look interesting. As for his mini-monster? It needs a few thousand more words, some better pictures and an endorsement from the monster.