The 387-mile (623 km) Bureya River flows southward in the Khabarovsk region of far-eastern Siberia – well, ‘used to flow’ might be a more appropriate description today. At some point in early December, an unexplained force from space slammed into a one-kilometer hill, pushing 800 tons of dirt, debris and vegetation into a mound that now dams the Brureya River. Its remoteness has made the cause a mystery – there are no witnesses to the explosion that some investigators now at the site say could not have been caused by a meteorite. With the usual government denial that it was a wayward rocket or a bomb test, some people are beginning to believe far-fetched claims that it was the result of a UFO crash. Is it possible? 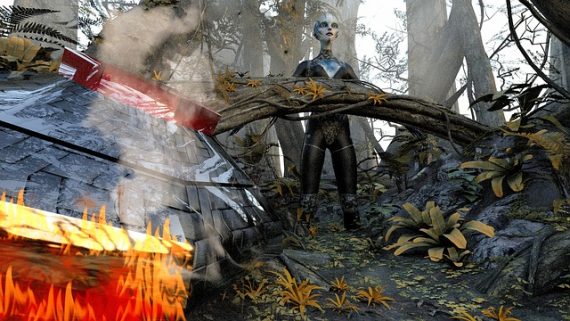 “It cannot be man-made.”

Locals who have nothing to hide have already decided that any explanations other than a meteorite or UFO are impossible, based on what they’ve found at the site that hunters Anton Ivanov and Alexander Makan stumbled onto on December 14th. They have good reason to be suspicious, since the massive and violent event took place in early December, was not found (at least officially) until December 14th and was not revealed to the public until December 24th. Who or what wants this event kept under such tight wraps?

“The height is from 80 to 160 metres above the ice level. There is no radiation. An object entered at a sharp angle, pulled down a mound and spread it along the river bed. It is not clear what it is: maybe an explosion, a bomb, or a falling airliner.”

Local government official Alexey Maslov described the mound of dirt created by something to the Siberian Times. (Photos and video here and here.) There were no official reports of airline crashes, bombs or other manmade events that could have caused such carnage. However, Evgeny Zubko, a cosmic dust expert (nice work if you can get it) from the School of Natural Sciences of the Federal University of the Far East, talked to local residents who had noticed "the arrival of a blast wave” and to the two hunters, who said they arrived to find that:

“It smells like hydrogen sulphide and vapour comes out in some places. We even found a spot on the very top where there are warm stones, we used them to keep our hands warm. It looks like it was very hot there. The ice edges are slim as if they were in boiling water.”

All of that says “meteorite” to cosmic dust expert Zubko, but not to Aleksei Makhinov, regional chairman of the Russian Geographic Society, who believes this was a “seismic landslide” caused by an earthquake.

'It happens very often in the (Russian) Far East. The entire coast of the Sea of Okhotsk is covered with these landslides when half a mountain falls down."

However, there’s no record of an earthquake in the matching time-span. Nor is there a record of a meteorite either, says Boris Shustov, the head of the Institute of Astronomy of the Russian Academy of Sciences, who says nothing was picked by Russia’s extensive network of ground-based tracking systems and thinks it was “just a landslide.”

As of right now, there’s no crater and no debris –just an 800-ton mountain of dirt that wasn’t there a few weeks ago and is now blocking a river that drives the downstream Bureyskaya hydro power station. That means it’s costing someone money – which means it won’t be blocking the river much longer. Will it be cleared before the mystery of its cause is solved? A cause that experts and witnesses say can't be manmade, can't be a meteorite, but could be a UFO?

It’s a lightly-populated area in Siberia and the secretive government and big money are involved … what do you think?

UFOs Around the World: Poland