New Evidence Supports the Ark of the Covenant Being in Ethiopia

After the Holy Grail, the quest Monty Python fans would most like to have seen the troupe hilariously search for is the Ark of the Covenant. While Indiana Jones did a superb job (and contributed an image of a melting Nazi that was as funny as a knight getting his limbs chopped off), the Ark deserves a Python treatment. Unfortunately, it may be too late to convince the remaining Pythons to get together – a investigative team claims it has found evidence that the Ark was taken from Jerusalem to Egypt before traveling down the Nile to Ethiopia, where it is believed to be under guard today. If it’s too late for a movie, how about an Ark of the Covenant musical?

“Although the subject is controversial and clouded with confusion, one emerging theory indicates that the Ark of the Covenant was transported out of ancient Israel and may be in Ethiopia today. As unusual as this may sound, the BASE team has uncovered compelling evidence that the Ark may well have been spirited up the Nile River to an eventual resting place in the remote highlands of ancient Kush–modern-day Ethiopia.”

BASE is the Bible Archaeology, Search & Exploration (BASE) Institute located in Colorado Springs, Colorado. Founded by former police investigator Bob Cornuke, BASE “is dedicated to the quest for archaeological evidence to help validate to the world that the Bible is true.” A controversial figure because he has no archeological background, Cornuke has previously claimed to have found Mount Sanai in Saudi Arabia, anchors from the biblical shipwreck of the Apostle Paul in waters near Malta and Noah's Ark in Iran – none of which appears to have been confirmed by outside independent researchers. Is his “evidence” about the Ark verifiable?

Cornuke and BASE investigators recently claimed  the Ark was on the Temple Mount in Jerusalem until 701 BCE. Sometime after that, during the reign of King Manasseh, it was removed and taken to Elephantine Island in Egypt where there are the ruins of a temple built in 654 BCE that matches the dimensions of Solomon’s temple in Jerusalem. Because of those dimensions and the fact that temples were not allowed outside of Jerusalem, he believes this was an emergency temple built for only one reason – to house the Ark. Cornuke’s evidence suggests this temple was destroyed in 410 BCE, so the Ark would have been moved out to somewhere else.

At this point, the BASE story starts moving to an often-told tale of the Ark being in Ethiopia. While many say it was brought there by Menelik I after he visited his father. King Solomon, BASE claims it was much later and, after leaving Egypt, first made a stop at Tana Kirkos Island in Lake Tana, where Ethiopian Christian monks showed them artifacts they claimed were from Solomon’s temple. They claim the Ark was then moved to Axum, where many believe it is kept in at St. Mary’s of Zion Church and guarded by one lone monk, another oft-told tale.

“I was able to speak, through an interpreter, with the Guardian of the Ark, who told me that no other man besides himself could lay eyes on the Ark, that it was an absolutely holy object. He said that the world would not be allowed to pollute it by looking at it. He added that he and the villagers would protect the Ark with their lives, if necessary.” 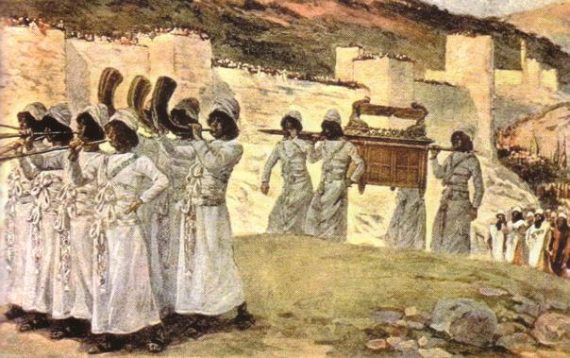 While no selfies with the Guardian were allowed, BASE also spoke with “a 105-year-old priest who once was the Administrator at St. Mary’s of Zion” who claimed he was allowed to see the Ark during a transition period after the death of a previous Guardian and described it as “a gold box with two winged angels on top.”

At this point, like the crate being stored at the end of “Raiders of the Lost Ark,” BASE hides the final piece of the puzzle.

“At this juncture, we cannot say with certainty that it is, but neither can be say for certain that it isn’t. What we have concluded is that St. Mary’s of Zion church in Axum, Ethiopia, is the resting place either of an incredible replica of the biblical Ark of the Covenant, or, of the actual Ark of the Covenant itself.”

Will we ever see the alleged Ark or the replica? Highly unlikely. Will we see a Python reunion film or a musical? About the same. Will we see any Nazis melting? Now that they know how easy it is to get in to see the Guardian of the Ark, that could be a possibility. Will the fifth installment of the Indiana Jones series be fiction or a live documentary on the finding of the Ark? Which would you rather see?

An Alternative Way of Becoming a Werewolf (Allegedly…)