Stealth Planes, UFOs, and a Certain Secret Base

As a follow-on to my previous article, "Bob Lazar, Area 51, UFOs and Russians," I thought I would expand on why it would be so important for U.S. authorities to keep a careful watch on any potential Russian penetrations of Area 51 in the 1970s and 1980s. And also to mislead the Russians as to what was going on at the legendary base. When it comes to the matter of Area 51 and the 1970s, there is one important issue that cannot be ignored. And it  should not be ignored. It was the early development of what has become known as “Stealth” technology for aircraft. It was in 1988 that both the Lockheed F-117 Nighthawk stealth fighter and the Northrop Grumman B-2 Spirit were unveiled for one and all to see. The completely black, triangular-shaped aircraft caught the world’s attention, primarily because of their strange, angular shapes. It’s intriguing to note that in 1982 a wave of encounters with what became known as “Flying Triangles” began over portions of New York State, specifically in Hudson Valley.

In their 1988 book, Night Siege, authors Dr. J. Allen Hynek, Philip J. Imbrogno and Bob Pratt wrote: “Can 7,000 eyewitnesses be wrong? They were there to witness the huge, hovering object in the sky, the flashing lights, the eerie silence. They are ordinary people from all walks of life: stay-at-home moms, kids, business people, engineers. They tell their stories here, and they all agree on one thing: they saw the same massive object cruising over their backyards. And it was like nothing they had seen before…”

At the time when the Hudson Valley encounters were at their peak, it was reasonably assumed by UFO researchers just about here, there and everywhere that aliens had arrived and were scoping out the area to a massive degree. When, however, the Stealth planes were unleashed in 1988 – planes that looked eerily like the Hudson Valley “UFOs,” more than a few of those same ufologists came to wonder if what was seen over Hudson Valley was actually a top secret variation on the Stealth Fighter and the Stealth Bomber. Regardless of whether or not the Hudson Valley UFOs originated in the United States, or on a world far, far away, one of the most intriguing revelations that surfaced when the Stealth planes were revealed was the startling fact that they had been secretly flying not just for a few years, but since the 1970s – at Area 51. And, the secret (the top secret) had been skillfully contained for more than a decade. 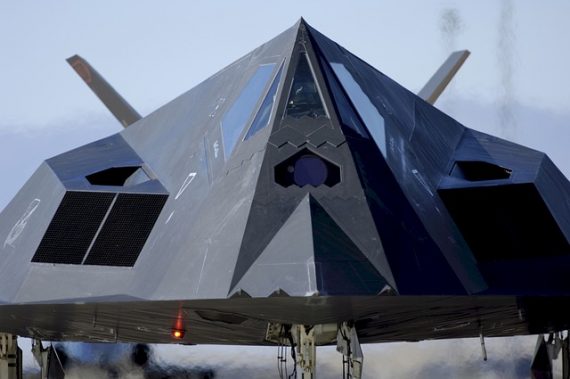 If there is one thing that just about any and all military agencies want, it’s for their aircraft to be completely invulnerable. Well, while that’s a tall order, steps were taken in the early 1970s to create an aircraft that could not be detected on radar. It would, then, be the ultimate predator: quietly and carefully approaching its completely oblivious target. That is, until it was all too late. Lockheed Martin, the company which was secretly contracted to come up with a stealth-driven fighter, state that a pair of engineers, Dick Sherrer and Denys Overholser, “developed a computer program based on obscure German and Russian theories, which postulated that radar beams could be reflected by a series of carefully angled triangular panels,” which is precisely why both the B-2 and the F-117 look so odd. But, cool, too.

The most important development came in 1976. That was the year in which a program designated “Have Blue” was established as, to quote Lockheed Martin, “the stealth demonstrator that would lead to the F-117A Nighthawk.” Built out of aluminum and not much else, the aircraft was typified by the angular shape and futuristic-look. Although the Nighthawk remained unknown to virtually everyone until 1988, it was first test-flown on June 8, 1981, just one year before the Hudson Valley “UFOs” were first seen. Notably, the Nighthawk – while in test stage – was flown exclusively at night. And, while it seems unlikely that the F-117A was the culprit at Hudson Valley, perhaps a far more advanced stealth plane was.

One of the most notable of all the missions that the Nighthawks took part in revolved around the invasion of Iraq in January of 1991. The radar-systems of the Iraqi military were woefully inadequate and, as a consequence, they flattened close to forty targets in no time at all; something which helped to bring the conflict to a close in a little more than forty days. Today, the Nighthawk is no more. It has been mothballed. But, how many other stealth aircraft – of highly advanced forms and technologies – remain hidden from prying eyes is anyone’s guess. Now, let’s take a look at the Stealth Bomber: the Spirit.

The brainchild of Northrop Grumman, the B-2 stealth bomber is, to quote the team that brought it to fruition, “a key component of the nation’s long range strike arsenal, and one of the most survivable aircraft in the world. Its unique capabilities, including its stealth characteristics, allow it to penetrate the most sophisticated enemy defenses and hold at risk high value, heavily defended targets.” It has played major roles in numerous conflicts, including Operation Iraqi Freedom in Afghanistan, in Kosovo, and in Libya. Not only that, the Spirit is capable of flying for 6,000 miles without refueling and can soar through the skies for 10,000 miles when refueled just once. And, it is armed with nuclear weapons. The B-2, then, is a decidedly formidable craft. Twenty-one such aircraft were built and deployed, of which only one came to grief, while taking to the skies from Andersen Air Force Base, Guam in February 2008. Just like the Stealth Fighter, early versions and incarnations of the Spirit were secretly flow from Area 51.

It goes without saying that hiding (from the Russians) the existence of early Stealth planes out at Area 51 would have been paramount to those working on the highly-classified  projects. And, to the extent that they may even have used tales of UFOs to act as convenient covers for what was really afoot - all of which could have led to additional operations, such as the one involving Bob Lazar in the late eighties.