The Bizarre Story of Freakville, U.S.A.

Driving along U.S. Highway 41 through the state of Florida, just about 20 minutes from the bustling city of Tampa, you are bound to come across an odd little town tucked away by the name of Gibsonton, also simply called Gibtown. It seems very much like any small backwater town at first glance, and one might even be inclined to drive right on by it, yet this is far from any ordinary town, as it may dawn on you as you pass circus decorations, old broken down carnival rides or other miscellaneous circus equipment piled up, and even circus animals milling about in yards or clearings. The atmosphere may begin to take on a rather surreal appearance as a monkey flits past, or you come face to face with a life-sized clown statue staring back at you, and this is because this is no normal town at all, and you have entered what is affectionately called by the locals “Showtown, USA,” as well as “Freakville.”

Back in the 1920s and 30s, small town America was ground zero for the heyday of traveling carnivals and sideshows, which came through rural areas to provide entertainment for the locals who normally did not have much to do and flocked to such venues. This was the booming golden era of the carnival and circus sideshow, and in the middle of it all we have Gibsonton, originally starting as a camp for a few circus freaks and steadily growing over the years as more carnival performers and managers gravitated towards it. Before long it was known as “Carny Town,” and it became sort of the official place to hang up their hats in the off-season when they weren’t on the road, where they would train, repair equipment, and where freaks could find some sense of belonging when they weren’t being gawked at by throngs of curiosity seekers. It was an anchor for their nomadic carnival lifestyle and a place of community for these people, who were often outcasts from normal society. 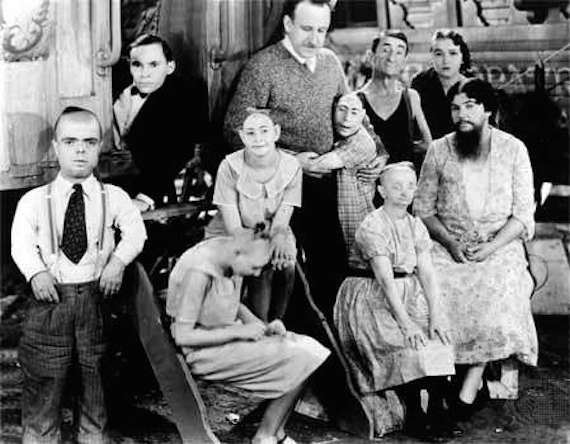 The town grew from a temporary camp to a permanent town, its population growing every day, and factories for carnival rides and equipment sprouting up. The town fully embraced its often unusual inhabitants, with a post office with counters specially made for dwarfs, restaurants with customized seats for Fat Ladies and Tall Men, and special zoning laws that allowed the carnies to keep their myriad exotic animals and menageries in their houses or yards. Gibsonton was once home to hundreds of circus sideshow freaks, human oddities, and other performers, including Percilla the Monkey Girl, the Alligator Boy, Penguin Boy, who had feet growing from his hips, Sealo the seal Boy with his stumps for arms and legs, Louise Capps Hill the armless girl, a pair of Siamese Twins who ran a fruit stand here, Poobah the fire-eating dwarf, the infamous Lobster Boy, the Gorilla Girl, the Frog Boy, Grace McDaniels the Mule Faced Woman, bearded ladies, dwarfs, and giants such as Aurelio "Al" Tomaini, once the world’s tallest man and the town’s Fire Chief, whose wife was oddly the tiny Half-Woman, as well as the Icelandic Giant. In addition there was a plethora of weird performers including tattooed men, sword swallowers, fire breathers, human blockheads, contortionists, and knife throwers.

The whole town was a sanctuary for these people, a utopia for the odd, where these people could go about their business out of the public eye. In later years the carnival and sideshows gradually fell out of favor as new forms of entertainment became more widely available and it was increasingly seen as unethical to display people with physical oddities as “freaks.” The town slowly lost its luster and reputation as a beacon for the odd and unusual, and began its decline into obscurity. Most of the freaks and performers this place once teemed with are gone or dead, although some of their descendants still live here, and one carnival historian by the name of David Doc Rivera has said of this decline:

Gibtown today is a sad old lady, in her finery and her makeup, that has seen her better years. It is an anachronism in the sense that it is more a city in someone’s imagination. Everything wears out; everything goes away.

However, there is still some life left in this bizarre town yet. In present day, Gibsonton boasts a population of nearly 15,000 people, many of them descendants of these carnies, freaks, and performers, and the town also has an extensive carnival museum, called the International Independent Showmen's Museum, and is home to the International Independent Showmen's Association, which boasts around 4,500 members from all over the world, as well as the largest annual carnival trade show still in existence. One can still see signs of the town’s carnival roots everywhere, such as retired circus rides and carnival animals, carnival decor everywhere, and even Ward’s World of Wonders, one of the only operating sideshows still in existence. The town has been featured in popular culture for years, including the X-Files episode Humbug, as well as the Dean Koontz novel Twilight Eyes, and an episode of the A&E crime drama The Glades. Everywhere one looks here one can still see evidence of this colorful past as one of the last bastions of carnival and “freak” life, and Gibsonton certainly still stands out as one of the most unique little roadside towns in America.