The Mysterious Atlantis of the Sands

The shifting sands of the deserts of Arabia have long been steeped in myth, magic and, legend, and one of these are the tales of an ancient lost city variously called Ubar, Wabar and Iram of the Pillars, among others, said to be buried out there in the dunes forgotten and abandoned for thousands of years. Often spoken of by the Bedouin nomads of this vast land of heat and sand and even mentioned in the Quran and the classic book A Thousand and One Arabian Nights, the fabled city is said to lie somewhere out in the Rub’ al Khali desert, which spans much of the southern end of the peninsula, and was inhabited by a mysterious people called the Ad, ruled by a King Shaddad ibn 'Ad. Said to have been established in around 3,000 BC, it was a place of grand beauty, with lofty buildings and sweeping, majestic pillars, towers and spires soaring up towards the sky, elegant and rich and beyond imagination from its position as a legendary trading post of spices and oils. It was supposedly a celebrated stop off point for traders, the land here once lush and green, in a region once called Arabia Felix, or "Fortunate Arabia," its beauty well-known by all who passed, and the city’s legend grew as it was mentioned in fable and song.

And then the city suddenly disappeared from history, its people and magnificence fading into the mists of time sometime between around  100-300AD. The legend of the lost city of Ubar says that this vanishing was due to punishment brought down from God upon its people after they failed to follow the ways of Allah and refused the advice of the prophet Hud, their city buried by a massive, thunderous sandstorm that swept in out of nowhere to erase them from existence forever. Although it is of course unknown if this is all literally true or not, the disappearance of the mythical lost city of Ubar has over the ages been speculated to have at least been based on a real place, and its mystery is such that of course with such an alluring mythology adventurers have long sought it out in the unforgiving landscape of the Arabian desert, some claiming some success and others rumored to have never returned at all.

One of the earlier attempts by outsiders to locate the legendary city of Ubar was made in 1930 by the explorer Bertram Thomas, who was at the time in the midst of a harrowing journey across the desolate Rub' al Khali in a bid to become the first European to cross this sea of sun scorched sand, so inhospitable, lifeless and barren that it is locally called “The Empty Quarter.” During his perilous journey through this domain of endless sand and dunes Bertram was told by his Bedouin guides of a lost city lying out under the sand that had once been full of wealth and unrivaled beauty, but which had been ruthlessly buried by a vengeful Allah because of their sins. Bertram looked for the city they spoke of, thinking it to be in the vicinity of an area called the Ramlat Shu’ait, but found no trace of it at the time, and he would later mention it to T. E. Lawrence, also known as Lawrence of Arabia, who called it “The Atlantis of the Sands.” Lawrence then made plans to search for it himself, even mentioning he might do it by airship, but he would die before ever being able to carry out his ambitious plan. In the meantime, Bertram became rather obsessed with the lost city of Ubar, making several forays out to look for it and even writing a book on it, called Arabia Felix. He would eventually find some traces of ruins in the sand and what seemed to be tracks used by caravans to get there, but it was inconclusive and he would die without ever seeing the fabled city that had consumed so much of his life.

The 1940s saw several promising finds by various explorers when English explorer Wilfred Thesiger found what he believed to be the remnants of Ubar at place called Shisr, which holds the crumbling ruins of a Bedouin well and what seems to be an ancient pre-Islamic stone fort. Then, in 1948 there was a geological party from Petroleum Development Ltd, who were conducting a geological survey of the Dhofar province when they too came to Shisr and claimed to have found a massive wall of an ancient fort, as well as a cave entrance beneath it leading down into the darkness of the earth. At the time the survey team was more interested in finding water for their camels and getting on with their harrowing work than investigating mysterious ruins, and so they did not look into it further, simply making note of it. There was also an expedition carried out by a St. John Philby, who did not find the city, but did claim to have made the unlikely discovery of a buried volcano lying dormant out there in the desert.

There have been various other expeditions in the years since to locate this mysterious Atlantis of the Sands, most of them either failing to find anything at all or merely bringing back intriguing but ultimately frustrating tales of finding enigmatic ruins in the sand, poking up like the bones of some prehistoric beast. One of the problems has always been that the area is so vast and remote, covering most of Saudi Arabia, as well as areas of Oman, the United Arab Emirates, and Yemen, all compounded by the fact that no one is really sure where Ubar is supposed to be, with numerous possible locations suggested over the centuries covering various far flung locales. Nevertheless, there are occasional sensational announcements that the lost Atlantis of the Sands has been found, and one of the more noteworthy of these was made in 1992 by a group of archeologists from Los Angeles who claimed that not only had they located the mythical city of Ubar, but had even determined why it had disappeared. 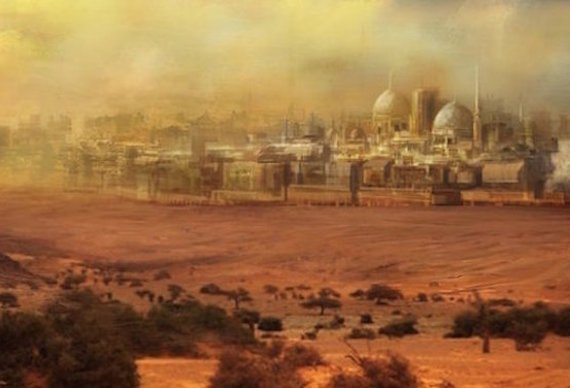 One of the leaders of the expedition, Nicholas Clapp, was fist inspired to look for Ubar after reading Bertram Thomas’ book on the matter, which in a sense infected him with the same obsession Thomas had had. Clapp began by studying old maps of the region, including several that had been drawn up in 200 AD by the Alexandrian geographer Claudius Ptolemy, as well as old explorer’s reports, Thomas’ own speculations, and moving on to using advanced satellite imagery that utilized a radar detection system which allows researchers to peer right through the sand to make out subterranean features and allowed them to distinguish the ancient trade routes through the region, composed of hard packed earth flattened by endless camels. They found what they were looking for at Shisr, directly under the old well and fort ruins there.

An excavation was started and they began to uncover evidence of what would have once been some sort of settlement, including fire pits, shards of pottery, animal bones, incense burners, coins, and other artifacts, and most impressive of all some kind of mysterious fortress that lies at the center of it all, composed of eight heavy limestone walls measuring 10 to 12 feet high and about 60 feet long, and four immense towers each 10 feet in diameter and 30 feet tall. There was also found evidence of a caved-in sinkhole, which seems to have collapsed below the city to send it tumbling into the cavern below to its ruin, which would explain the stories of the city meeting a violent end. The survivors of this cataclysm would have then abandoned the city, leaving it to its fate to be reclaimed by the desert.

It seems like a remarkable discovery, but the problem is there is absolutely no way to determine if this was the actual mythical city of Ubar rather than just another set of unconnected ruins similar to those found in other areas, and indeed there has been a lot of criticism of Clapp’s claims that this is really the legendary mysterious lost city he was seeking. For one, there is no proof that the fortress found was in reality the hub of a settlement, and even if it was it does not seem that it would have been nearly on the scale of grandeur described in the great legends. In this case, the finding is just basically wishful thinking, prematurely assigning an identity to these anonymous ruins that may have had nothing to do with Ubar and which may not have been any more than a small caravan watering hole. 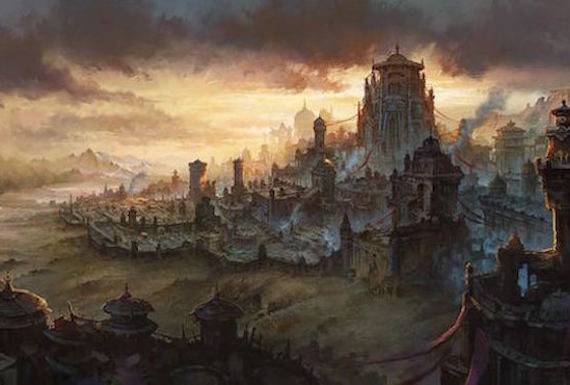 Then there are those who still doubt that the city ever even really existed at all outside of the tales, and that these expeditions are chasing shadows. One very prevalent theory amongst scholars is that Ubar was never actually a city at all, but rather a region and people that were once prosperous but met their end at the hands of the encroaching, withering desert and the decline of overland trade of incense oils and spices, and its romantic transformation into a mystical lush city of towers and gold was the product of later myths built around it, a real place only in the imagination. One archeologist by the name of Dr. Juris Zarins has said of this:

There's a lot of confusion about that word (Ubar). If you look at the classical texts and the Arab historical sources, Ubar refers to a region and a group of people, not to a specific town. People always overlook that. It's very clear on Ptolemy’s second century map of the area. It says in big letters "Iobaritae" And in his text that accompanied the maps, he's very clear about that. It was only the late medieval version of One Thousand and One Nights, in the fourteenth or fifteenth century, that romanticised Ubar and turned it into a city, rather than a region or a people.

It seems that while the 1996 discovery is certainly interesting, there is no guarantee at all that this is the legendary city spoken of in lore and myth, and indeed Ubar, the Atlantis of the Sands, may not have even existed at all. This discovery does not solve the enigma, and neither it nor the doubts of Ubar being real have done much to quench the desire of explorers to keep pushing further out into this bleak swath of harsh desert in a quest for answers. In the end it remains just as mysterious as it always has been, and for as long as the spirit of adventure and belief Ubar as a physical city exist there will be those who seek to find it. Whether they will find the once towering city out there buried in its ancient sandy grave or whether it only looms upon the landscape of the mind remains to be seen.