The Mysterious Ghost Lights of the Outback

Out over the harsh terrain of the Outback of Western Australia, through all of the desert scrub, water-less dead creeks, gullies, and the unforgiving landscape of the flat, sun-scorched place called channel country and about 40 miles east of the tiny town of Boulia, once existed a town called Min Min, now merely desiccated ruins like the remains of some prehistoric beast. It is here among these ruins where a curious phenomenon has long been witnessed by those passing through, strange, inexplicable ghostly lights that bob and hover across this remote land to frighten and startle, and which are steeped in lore and legend.

What have come be called the Min Min lights are typically described as shimmering orbs that can range in color, including blue, white, green, red, and yellow, sometimes changing between all three, as well as take different sizes. They are sometimes said to have somewhat blurry edges that seem to pulsate or scintillate, and they can be slow moving or conversely very fast, flying through the night like a land bound shooting star, sometimes moving in a straight line and sometimes performing aerial acrobatics, and on very rare occasions they have been witnessed to break off into two separate lights that go careening their separate ways off into the night. Interestingly many of the reports that have come in describe the lights as following the witness, or conversely moving away from them if they try to approach, and some accounts claim that they evoke thick feelings or dread or confusion, leaving the witness quite unsettled. The lights might wander off into the distance out of sight or vanish into thin air, and they are always a startling thing to see out here in these badlands.

Considering their mysterious, unearthly nature it is perhaps not surprising at all that they have attracted their fair share of spooky lore. The Aborigines believed them to be the spirits of their ancestors roaming the land, and when white settlers began sighting the lights in 1918 there were immediate legends that they were connected to the old ghost town, or more specifically the notorious hotel that once stood there, which was said to be a nefarious place, indeed. According to this legend, the owners of the hotel were in the grim business of murdering guests for their valuables, after which the bodies would be unceremoniously buried in shallow graves in a dry patch of land behind the establishment. In this tale the lights are the vengeful ghosts of these victims, and that they seek to confuse travelers and get them lost in the forbidding Outback out of some vendetta. The lights became a sort of scary bedtime story, with whispers that the lights were omens of death, and that to see them meant certain doom, made even more ominous tales of those who claimed to have seen the lights before fatal mining accidents or disasters.

Some of the earliest published reports of Min Min light sightings originate in the 1930s, such as one account from 1937 from a rancher named Henry Lamond. He claimed that he had been out on horseback at around 2 AM in the morning when he saw what he at first took to be a car out there in the Outback, which was a little unusual but not in and of itself so completely bizarre either. However, things would get very strange very fast, and he would say:

Cars, though they were not common, were not rare. I took note of the thing, singing and trotting as I rode, and I even estimated the strength of the approaching light by the way it picked out individual hairs in the mare's mane. Suddenly I realized it was not a car light — it remained in one bulbous ball instead of dividing into the 2 headlights, which it should have done as it came closer; it was too green-glare-y for an acetylene light; it floated too high for any car; there was something eerie about it.

The light came on, floating as airily as a bubble, moving with comparative slowness ... I should estimate now that it was moving at about 10 mph and anything from 5 to 10 feet above the ground ... Its size, I would say, at an approximate guess, would be about that of a new-risen moon. That light and I passed each other, going in opposite directions. I kept an eye on it while it was passing, and I'd say it was about 200 yards off when suddenly it just faded and died away. It did not go out with a snap -its vanishing was more like the gradual fading of the wires in an electric bulb. 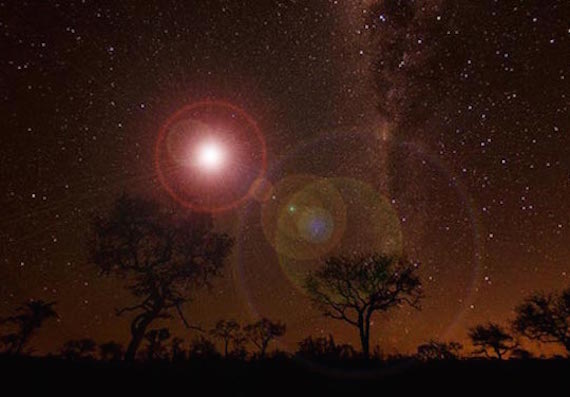 One very eerie and well known report with a definite air of the paranormal comes that very same year, and was written of by newspaper columnist Bill Bowyang. He claimed that one evening from their camp he and his companions had seen an odd light bobbing and weaving about in the cool desert night, which he at first took to be someone out there waving about a lantern, but soon saw that this could not be the case as it would rise high in the air and then back down again. Bowyang suggested following it, after which his frightened companions warned him that it was a ghost light and that it was trying to lead them to their doom over the precipice of a rocky chasm they knew of hidden in the inky dark in that direction. Curiosity got the better of him, and he decided to go out and see what the light was anyway, saying of what happened next:

I strode on into the darkness. I had got to within perhaps twenty yards of the peculiar light, which was still hovering like some huge ball of glowing embers in mid-air about seven or eight feet from the ground, when suddenly it swerved abruptly to one side. A man’s warning voice came through the darkness. ‘The abyss ain’t a dozen yards from where ye are; come back, come back.’ I stopped, but not before I had seen – true to the old fellow’s words – that the strange light had indeed drifted out over the great chasm. As I watched, the light hesitated, floated back a little towards me, then as though tempting me to follow, but at the same time annoyed at the possibility of losing a victim, it glided back again over the chasm where, with a few final erratic movements, it dropped from sight.

This ominous reputation as entities trying to baffle and confuse has been echoed in other similar reports, such as one from a local named James Birch, from the isolated Outback town of Kimberley. He says that he grew up hearing the tales of the Min Min lights, and says of them and his own experience:

As a kid growing up the old people used to tell me, they [Min Min lights] were old people's spirits looking after country. If you've lived in the Kimberley you would have experienced spotting a Min Min light once in your life. We were heading back into town after hunting. I was driving towards town when all of sudden a Min Min light appeared. We all stared at the light and all of a sudden we were going in the opposite way, going back into the bush and following the light without even realizing. 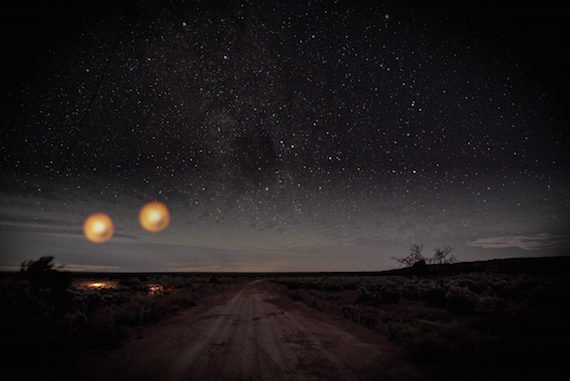 Over the years there have been hundreds of such sightings of the Min Min lights, and the strange phenomenon continues to this day, sparking much speculation and debate as to what they might be. Of course there are the ideas that these are ghosts, spirits, or UFOs, but there have been more scientific efforts to try and explain them as well, ranging from the simple to the complex. Some of the more mundane explanations are that these lights are caused by birds, owls, or bio-luminescent insects, but this does not seem to really fit in with what witnesses report seeing. There are also the theories that the lights are caused by some sort of fluorescent gases or that they are a mirage caused by the clash of layers of cold and warm air, which can have the effect of bending light and causing distant light sources over the horizon such as headlights or fires to appear as if they are much closer, a phenomenon known as Fata Morgana, although these do not explain reports in which the witness sees them fly over their heads, pass right by them, or circle them out in the dark. The lights could also be caused by other factors such as ball lightning, ionization in geophysically-generated electrical fields, or some other little understood natural phenomenon, but no one knows for sure, all we know is that they are weird indeed.

Many of these explanations do not fully explain all of the idiosyncrasies of Min Min light reports, such as the seemingly intelligent nature they demonstrate, ghostly voices, or the profound fear they are said to generate, and in the end the phenomenon has not conclusively been solved. Whether the Min Min lights are the spirits of Aboriginal elders, the ghosts of dead settlers, UFOs, mirages, misidentifications, or something else altogether, they have gone on to become one of the most enduring unexplained mysteries of Australia’s Outback, and continue to capture the imagination.