The Mysterious World of Real Golems

Since time unremembered humankind has had rather an obsession with creating something from nothing. We have alchemy, with its conjuring up gold from useless substances, but even more driving seems to be our will to play God and invoke life from nothingness. In modern times this can be seen in cloning technology and what not, but this is not a new thing in the slightest. For centuries there have been attempts to create that spark of life, to make the inanimate animate, ranging from bringing back the dead to creating the legendary homunculi, but these are far from the only examples, and the human urge to conjure up life from the void seems to be insatiable, with many legends and myths built up behind this simple premise, to create life where none existed before.

One of the most intriguing type of entity brought to life through human means is a type of creature known in Jewish lore as the golem, which comes from the ancient Hebrew word for “shapeless mass” or “unfinished substance,” although in modern Hebrew it tends to mean "dumb" or "helpless." These enigmatic beings were humanoid or anthropomorphic creations of inanimate matter, typically mud, soil, or clay, but also sometimes rock or other materials, which were animated through magical means and in some traditions infused with an actual part of a soul. Upon being brought to life, the golems were said to be fully mobile and totally obedient to the one who had animated them, although they were also considered dangerous for their lack of independent thought or intelligence, as well as their disturbing tendency to take orders sometimes a bit too literally, and the lumbering beasts were also known to be rather uncooperative or hard to control at times. They were nevertheless seen as perfect for manual labor, as well as protectors, body guards, and sentries for areas where no one was allowed. 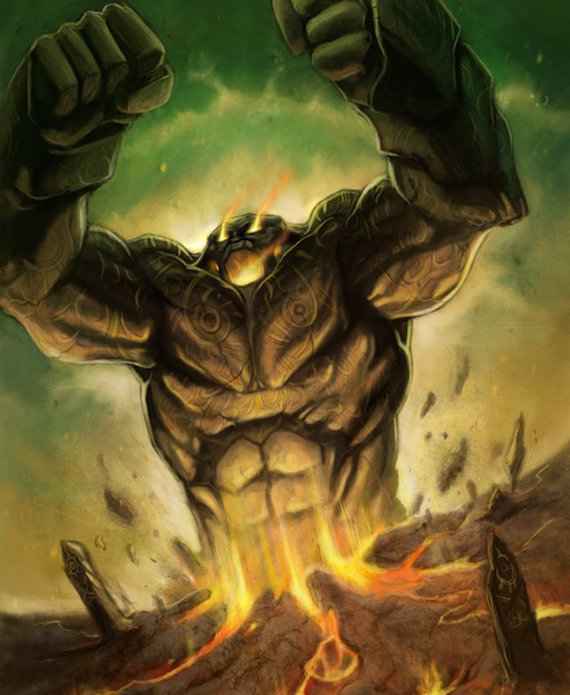 The lore of these magical creations is ancient, thought to have been first mentioned in the Bible (Psalms 139:16), and according to Talmudic legend, the biblical Adam himself was a golem for his first 12 hours of existence, fashioned by God from the earth. Another old Jewish legend is that the prophet Jeremiah fashioned his own golem servant. The legend of the golem would go on to appear in various texts and manuscripts throughout the centuries, mostly tied to Jewish mysticism and magic, and there were many accounts of those who had successfully brought the mysterious creatures into existence. One account concerns the 11th century Jewish poet and philosopher Solomon ibn Gabirol, who according to legend was afflicted with a debilitating and disfiguring skin illness that forced him into self-exile out in the remote wilderness. It is said that Solomon brought into existence a female golem made of wood in order to help him with chores and to serve as his concubine, dutifully serving him until he was forced to destroy it when he feared it would be discovered.

The golem mythology and similar such tales were particularly abundant in the Middle Ages, where we can find various accounts of those who allegedly actually managed to unlock the secrets to bringing them into existence. Perhaps the most well-known such account is the story of a Rabbi Eliyahu of Chełm, who in the 1600s supposedly created a golem that he used as a sort of servant, of which was written of by one Kabbalist as follows:

And I have heard, in a certain and explicit way, from several respectable persons that one man [living] close to our time, whose name is R. Eliyahu, the master of the name, who made a creature out of matter and form and it performed hard work for him, for a long period, and the name of emet was hanging upon his neck, until he finally removed it for a certain reason, the name from his neck and it turned to dust.

Another rather famous account of the creation of a golem is that involving the 16th century rabbi of Prague, Judah Loew ben Bezalel, also known as the Maharal. According to the tale, the rabbi created the hulking abomination out of clay from the banks of the Vltava River, for the purpose of defending the Jewish ghetto of Prague from attacks by their enemy, Rudolf II, the Holy Roman Emperor, who was at the time seeking to drive them out. In this account the golem was called by the names Josef and Yossele, and in addition to its mighty, brutish strength possessed an array of other mystical powers, such as the ability to become invisible and also to conjure up various supernatural spirits and entities. 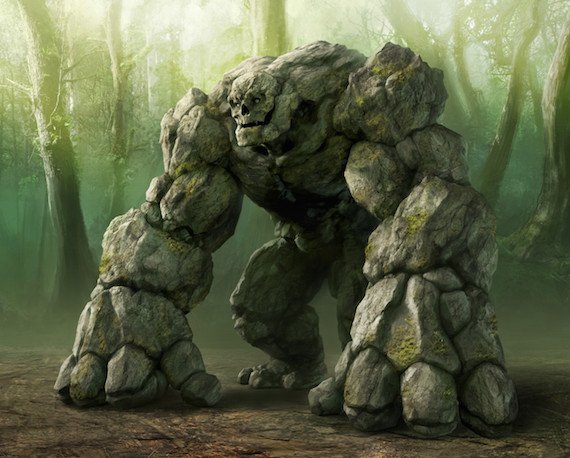 The golem’s master, Judah Loew ben Bezalel, apparently could turn the creature on or off by adding or removing a piece of paper kept in its mouth, which held upon it the words of power that animated it, called a shem. He would typically deactivate the golem if it became too unruly, or on the days of the Sabbath. However, one time the rabbi is said to have forgotten to remove this paper on this day, and the monstrous clay man went on a fearsome rampage through the city streets, wreaking much havoc before its Shem was once again removed to render it innate. In other accounts it simply began to act up, becoming unruly as if it were an insolent child. According to legends, the golem Josef still exists to this day somewhere within the attic of the Altneushul, also called the Old New Synagogue, in Prague, merely a statue now and missing the words of power that fuel it.

It sounds as if this must surely all be myth and legend, and maybe it is, but there have long been said to be ways to actually create these golems. Throughout the ages there have been many proposed various methods using a wide variety of a combination of techniques, meditation, rituals, mantras, spells, dances, and incantations passed down on how to create these creatures, all of them differing in many respects but usually exhibiting some commonalities. For instance, the process always requires a purification rite on the one creating it, a humanoid form forged by hand of clay, soil, rock, or wood, the use of powerful incantations recited over this form, and finally a final combination of words of power, usually some permutation of one or more of the true names of God, which will activate the golem and imbue it with life. Usually these words would be written on a piece of parchment or amulet and then either shoved into the golem’s mouth, attached to its forehead, or in the case of an amulet placed around the neck, and in many traditions the Hebrew letters aleph, mem, and tav must also be etched upon the thing’s forehead to power it.

Perhaps the most widely known tomes on creating golems is a Kabbalistic text called the Sefer Yetzirah, or "Book of Creation," which was very popular in the Middle Ages. Here within the pages of this ancient tome are outlined instructions for several proposed methods of making golems, all of them incredibly complex and requiring a great knowledge of the mystic arts and deep understanding of the Hebrew alphabet, the letters of which are said to be imbued with great power that can exert itself on the physical world in varying ways. While many scholars and mystics of centuries past have long claimed that the methods contained within this text really do work, the problem lies in the fact that over the years it has been translated into Latin, Yiddish, English, and often translated from one of those to the other, meaning that many of the secrets of creating a golem have been obfuscated, distorted, twisted, or lost in translation, with errors, misunderstandings, and omissions present as well that have accrued through various reprints and revisions, making it all but useless and banishing these mystical secrets of the golem to history. 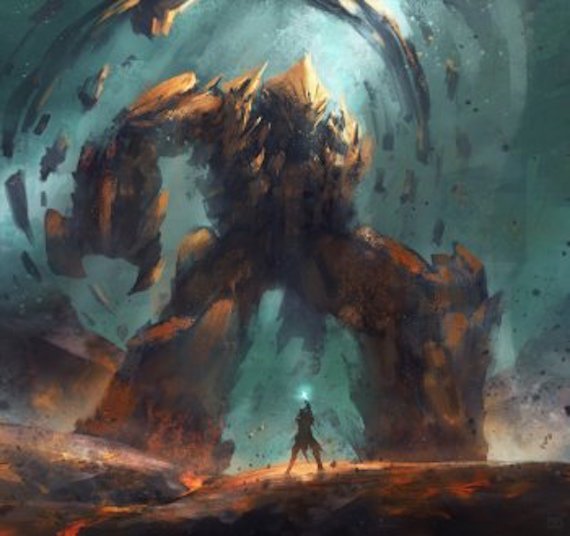 Regardless of how it is done, if properly carried out the newly formed golem is then in servitude to its master, but extremely literal in its interpretation of orders and prone to becoming disobedient and even violent as time goes on. They also have vast, terrifying strength which they can hardly control, meaning they could easily destroy, injure, or kill even unintentionally. There is also the fact that, although the creatures are not inherently good or evil, much of the lore on these beings states that if a golem is used for impure or evil purposes it will not only grow more uncontrollable, but also larger and more powerful as well, until there is no way to stop it as it runs amok. The creation of a golem in lore is typically not something to be taken lightly, and there are many instances wherein they are required to be deactivated before they can become a problem, which according to the tradition can be achieved either by removing the power words from its head, erasing one or more of the words carved there, or reciting the incantation that spawned it backwards.

Whether golems ever really did exist or not, they have gone on to have an incredible influence on legends, folklore, and fiction throughout the ages, appearing in countless tales, fables, and books, all the way up to modern times. Perhaps the most famous book clearly inspired by the golem mythology is Mary Shelly’s classic 19th century work Frankenstein, and the creatures have appeared numerous times in fantasy books and films. Was the magical creation of these golems ever a real thing, an alchemical secret lost to time, or are these just legends and stories? Whatever the case may be, it is clear that the desire to create new life from nothing is an alluring theme for us, and an immovable landmark upon the landscape of the human psyche.

Deadly Mystery Creature Still on the Loose in India