Things That Go Boom in the Night: Earthquakes and Earth Lights

As winter 2018 ensues here in America, the seasonal appearance of one of my favorite unusual natural phenomena--the so-called "mystery booms"--can generally be expected.

Although these unusual "booms" have a wide variety of causes, seasonal appearances in the winter months are sometimes associated with cryoseisms (more commonly known as frost quakes). These are cooler-weather localized phenomena that occur when explosive pressure builds up below ground, often around the time of the first significant freeze of the winter. After groundwater saturation occurs following periods of heavy rain, if temperatures drop below freezing it can result in fractures that result in localized tremors, and sometimes loud "booms" associated with the event.

While these localized "quakes" are an interesting seasonal phenomenon, there are interesting things that are sometimes associated with more conventional seismic phenomena too, such as luminous phenomena known as "earthquake lights."

In fact, as of the time I'm writing this, a small 4.4 magnitude earthquake occurred earlier this morning near the Tennessee/North Carolina border, and many residents in my region felt the quake, including yours truly. At approximately 4:16 AM local time, I felt a light, but noticeable shaking that gently rocked my entire home. Presuming it was an earthquake (since my hometown of Asheville, North Carolina is right along the Brevard Fault), I noted the time before attempting to go back to sleep, so that I could gauge whether the timing would be correct if reports the following day indicated that a quake had indeed occurred.

Sure enough, this morning reports from around the region were commenting on the earthquake (the primary 4.4 magnitude quake actually occurred at around 6:30 AM ET, so the light tremblor I felt must have preceded the later, more significant quake). It is not uncommon for lighter quakes to accompany such a seismic event, sometimes occurring before, and after the primary quake.

Here's where things get a little interesting though; before going back to sleep, the notion struck me to look out the window to see if there were any indications of what might have caused it (apart from my presumption that a small earthquake had just occurred). Looking out the window, I noted a bright light over the horizon in the distance, which was extremely vivid and approximately 1/4 the size of the full moon. Had this been one of the infamous earthquake lights?

Earthquake lights are believed to be natural luminous phenomena that occur around regions where tectonic or seismic activity occur. These little-understood phenomena are a subject of much debate, and theories about their appearances and types of manifestation range from plasmas akin to ball lightning, to the release of gases that become airborne and may ignite, causing illuminations that become visible as they burn.

A famous example of alleged earthquake lights that appear on a recurring basis here in my region are the Brown Mountain Lights, which have been studied a variety of times over the years (to-date, the most comprehensive scientific study occurred decades ago, as undertaken by George R. Mansfield in March and April of 1922; for more on this, see USGS Circular 646, "Origin of the Brown Mountain Light in North Carolina"). Although it was Mansfield's contention that the distant headlights of locomotives could explain most of the lights, some anecdotal evidence may suggest that the lights are frequently seen in modern times, and often above the horizon (it is this writer's opinion that a ball-lightning-like plasma may account for at least some of the appearances of the illuminations at Brown Mountain, as potentially documented in this footage obtained by Dr. Daniel B. Caton of Appalachian State University in 2016).

All this to say, in essence, that there is a bit of history of "earthquake lights" around the Brevard Fault area, and coinciding with a small tremblor preceding a 4.4 magnitude earthquake in my region, the thought crossed my mind that I might finally be seeing one of these elusive nocturnal illuminations. It should be noted, of course, that the area over the horizon to the East where the light appeared also happened to be the general area where Venus would be visible in the early morning hours; the problem with the Venus theory, however, was that the sky was completely overcast, with a ceiling at about 36,700 feet (according to accuweather.com). Would Venus, bright though it is, have managed to cut through the dense cloud cover over Asheville this morning?

In short, yes. Venus can appear extremely bright in the early morning sky, and dialing up some stargazing software, I was able to satisfactorily reproduce the conditions of my observation while looking due east at precisely 4:16 AM. Below is a screen grab of what I found: 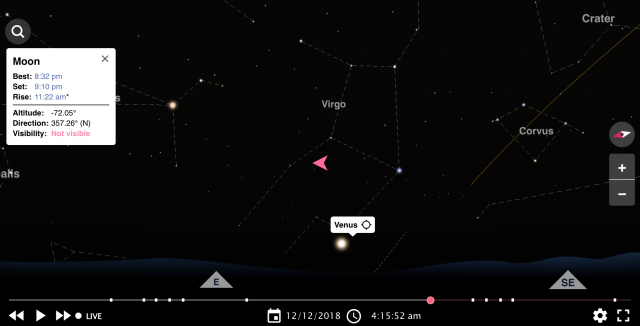 So at 4:16 AM as I lay awake considering whether I had just experienced an earthquake, I looked out the window and saw no earthquake light, but instead a nearby (and very bright) planet, whose reflected sunlight was cutting through the early morning overcast and giving the distinct impression of an illumination below the cloud ceiling.

What can we learn from this? Well, one of the more interesting takeaways for me was the fact that Venus appeared just as bright in the distance even with a full cloud cover. Thanks to modern star-charting software, I was able to easily determine this (as I could have done even more easily at the time of the observation, by simply using a star watching app on my smartphone, had I not been more intent on trying to go back to sleep at that moment). However, I can see how the unusual brightness of Venus could easily give an observer the impression of a light source at a much lower altitude, due to its ability to cut right through the cloud cover.

Although it's often said that Venus is mistaken for being a UFO (probably more often than you'd think!), this would be all-the-more understandable considering that its curious brightness can cause it to look like a peculiar light hovering in front of distant clouds. In the meantime, as for any "real" earthquake lights, I suppose I'll just have to keep looking!

Ghost of the Extremely Hungry Kind