Water Discovered On The Asteroid Bennu

Within the first week of the OSIRIS-REx probe arriving at Bennu, it has already detected water on the asteroid. On December 3, 2018, the probe reached the diamond-shaped asteroid in NASA’s first asteroid-sample return mission.

The scientific team pointed three instruments onboard the spacecraft in the direction of Bennu and started their observations. They received data from the probe’s two spectrometers – OVIRS (OSIRIS-REx Visible and Infrared Spectrometer) and OTES (OSIRIS-REx Thermal Emission Spectrometer) – that showed the existence of molecules that contain oxygen and hydrogen atoms that are bonded together. These molecules, which are called “hydroxyls”, are believed to exist across the entire asteroid in water-bearing clay minerals that would indicate that the rocky material on Bennu connected with water at one point. Since Bennu is too small to have ever had liquid water, it’s very possible that it was present on its parent body which was a much bigger asteroid. 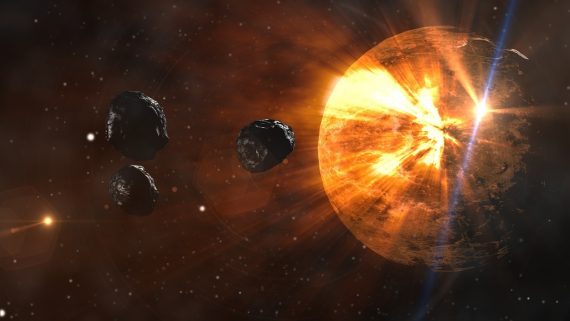 Amy Simon, who is the OVIRS deputy instrument scientist at NASA’s Goddard Space Flight Center in Greenbelt, Maryland, said, “The presence of hydrated minerals across the asteroid confirms that Bennu, a remnant from early in the formation of the solar system, is an excellent specimen for the OSIRIS-REx mission to study the composition of primitive volatiles and organics.” She went on to say, “When samples of this material are returned by the mission to Earth in 2023, scientists will receive a treasure trove of new information about the history and evolution of our solar system.”

The surface of Bennu contains a mix of rocky, boulder-filled regions, as well as a few smooth regions that do not have boulders. While there are more boulders than initially thought, there is one in particular that scientists are interested in and it’s located at the asteroid’s South Pole. Initial calculations from the OCAMS (OSIRIS-REx Camera Suite) show that the huge boulder is around 164 feet high by 180 feet wide.

Click here to see a picture of the Bennu asteroid.

The mission is only conducting preliminary surveys of Bennu at this point as it performs flybys over the asteroid’s North Pole, South Pole, and equator at a distance as close as 4.4 miles. Once they determine Bennu’s mass, scientists can then create a plan for the spacecraft to enter its orbit. While performing the surveys, it also gives the Canadian Space Agency’s OLA (OSIRIS-REx Laser Altimeter) its first chance to make observations. 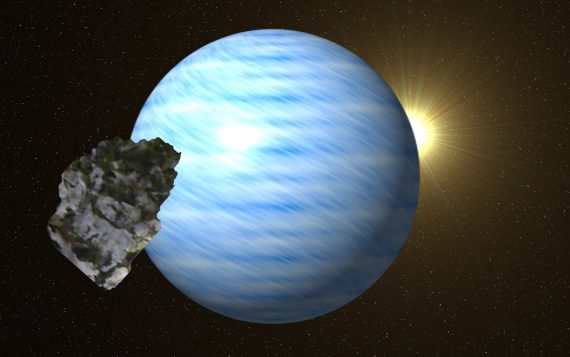 The OSIRIS-REx probe will enter Bennu’s orbit on December 31st and will stay in orbit until the middle of February in 2019. At that point, it will leave the asteroid’s orbit and conduct more flybys for the following survey phase. The probe will get within one mile of the asteroid’s surface which will set a record for the closest orbit of a planetary body by a spacecraft, as well as another record for the smallest body ever orbited by a spacecraft. The OSIRIS-REx is set to leave the asteroid in March 2021 and head back to Earth.