When a Fictional Monster Came To Life…Well, Almost…

It’s rare that a story of a monster crosses paths with the world of government and the military. But, that’s exactly what happened when it came to the matter of a massive, mysterious creature – or, rather, an alleged massive, mysterious creature – which is said to have surfaced in the late 1990s. It quickly became the subject of deep interest to no less than the United States Navy. To fully understand the controversy, and how and why it all began, it’s necessary to go back in time to the 1960s, when the Cold War was still in full force. It was in that decade that the Navy quietly and carefully established a top secret program known as SOSUS. It stood for Sound Surveillance System. Essentially, it was a vast network of underwater microphones that spanned much of the planet and which were designed to monitor for the movements of Russian submarines – and particularly so those that were equipped with atomic weapons. Today, the Cold War - as it was back then - is over. But, the world is still a dangerous place. Maybe even more so than back in the old days when we had only one enemy to worry about: the Soviets. Of course, the fact that the Russians are flexing their muscles again does not bode well for the future.  As a result, detectors still exist, and they are still picking up on sound waves in what is termed the Deep Sound Channel.

It’s not just Russian (and, today, Chinese) subs that the U.S. military has recorded on its SOSUS equipment. Ships, earth-tremors, and even whales have been detected by the highly sophisticated technology. It is technology that has been significantly improved upon since the old days and which is now overseen by the National Oceanic and Atmospheric Administration (NOAA), which is a section of the government’s Department of Commerce. All of which brings us to a certain, deeply puzzling, event that occurred in 1997. That was the year in which NOAA recorded a very weird, and very large, “something” in the waters of the South Pacific Ocean, west of South America’s most southern tip.

Whatever “it” was, it certainly caught the attention of NOAA and the military, who nicknamed the anomaly as “Bloop.” Whatever Bloop was, he, she or it was of a certain amplitude to be picked up on tracking equipment more than 5,000 kilometers from where its movements were recorded. More intriguing, within both NOAA and the Navy there were those who suspected the signature was suggestive of Bloop being a massive, unknown animal, such as a squid of unparalleled proportions. Back then, there were excited conversations in the field of Cryptozoology; they were conversations which gave hope to some that - just perhaps -   H.P. Lovecraft’s Cthulhu and / or the legendary Kraken were not just the stuff of fiction, after all.

When the media latched onto the story, NOAA admitted that this was far from being the first occasion upon which such anomalies had been detected in the world’s oceans. Each and every one of them had been given specific names, including Whistle, Upsweep, Train, and Slowdown. As for NOAA’s stance on the matter of Bloop today, the prevailing theory within the agency is that Bloop was nothing weirder than a large iceberg that was beginning to collapse, and which provoked the sounds that were recorded and provoked so much debate. True or not, the legend of Bloop lives on, perhaps even still giving hope to some that Cthulhu is something more than just fiction. 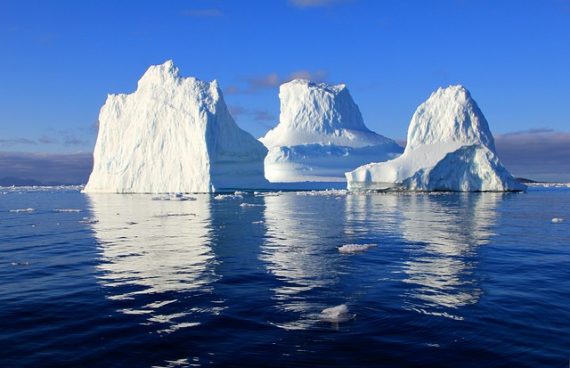 My opinion on all of this? I'm inclined to go with the iceberg theory. Admittedly, it would be cool to think that something like Cthulhu just might be lurking deep in our oceans. H.P. Lovecraft described his famous creation like this: "A monster of vaguely anthropoid outline, but with an octopus-like head whose face was a mass of feelers, a scaly, rubbery-looking body, prodigious claws on hind and fore feet, and long, narrow wings behind." To be sure, it would be an amazing sight to see such a beast surface from the ocean depths. But, really, what's more likely: a huge, monstrous beast or an iceberg? I'll tell you: an iceberg.