When An Ancient Monster Rears Its Head(s)

For centuries, Scottish folklore and legend have both been filled with tales of a wild and deadly beast known as the Kelpie. The terrible beast, which has the ability to transform itself into numerous forms – even that of people – was greatly feared throughout the 1600s and 1700s, when reports of the Kelpie were at their height. As for its curious name, “Kelpie” is an ancient Scottish term meaning “water-horse.” There is a very good reason as to why that particular name was applied to the beast, as will soon become very clear. As its name strongly suggests, the water-horse spent much of its time lurking in the waters of Scottish lochs – specifically in the shallower, marshy areas of such locales. It would coldly and callously wait for an unwary passer-by to appear on the scene and then strike, mercilessly and without any hint of a warning. The beast’s mode of attack was, admittedly, ingenious, even if the end result for the victim was not a good one. In fact, it was almost always downright fatal.

Very much creatures of the night, Kelpies were said to dwell in the waters of literally dozens of Scottish lochs. As creature-seeker Roland Watson demonstrated in his book The Water Horses of Loch Ness, however, the vast majority of reports of such beasts emanate from none other than Loch Ness. We may never know, for sure, the real form of the Kelpie; only the guise that led to the creation of its name. But, what we can say for certain is that the small number of witnesses who encountered the beast, and who lived to tell the tale, described it as a large black or white horse. In most cases, the victim was a late-night traveler, walking along an old, well-known pathway near the water’s edge of the relevant loch. Suddenly, the huge horse would rise out of the water, dripping wet, and make its way to the shore, with its coat shining under the light of the Moon. 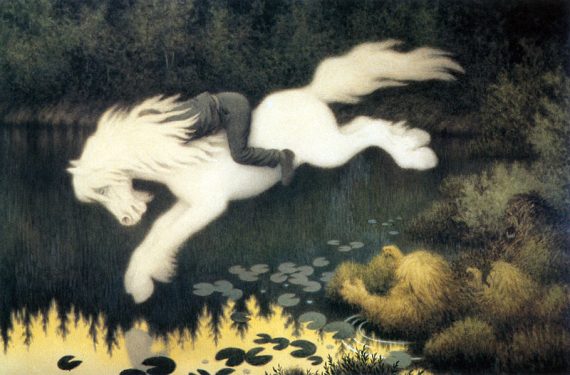 Under such strange circumstances, many might be inclined to make a run for it immediately. There is, however, a very strange aspect to many of the Kelpie stories. Namely, that the people who crossed its path felt as if their free will had been taken from them and that they were deliberately prevented from fleeing the scene. Today, we might justifiably suggest that the beast had the power to control the minds of those in its deadly sights. Perhaps, even by a form of supernatural hypnosis. Those fortunate enough to escape the icy clutches of the Kelpie described how they felt driven to climb on the back of the horse and grab its reins. Despite having a sense of dread and a fear of doing so, that’s exactly what so many did – and, in the process, failed to survive and tell their tale. It was at that point that the Kelpie made its move – an incredibly fast move.

With the entranced person now atop the monster, it would suddenly launch itself into the deep and cold waters of the loch, with the poor soul unable to let go of the reins. Death by drowning was all but inevitable, aside from that very lucky, aforementioned body of people who were fortunate enough to have survived and who related their stories – hence why we know of the creature and its terrible modus operandi. As for the reason behind these deadly attacks, it was said that the creatures sought one thing more than any other: the human soul.

Although the Kelpie was very much a monster of centuries long gone, there is a thought-provoking case which suggests a Kelpie may have been on the loose in England in the mid-1970s. In the summer of 1976, an encounter with the much-feared and legendary "Man-Monkey"of Bridge 39 on the Shropshire Union Canal occurred; a supernatural creature first reported in January 1879. It was a strange, spectral, ape-like beast. The 1976 witness was a man named Paul Bell, a keen fisherman and someone who, in July and August 1976, spent several Saturdays out at the canal with his rods, reels, bait, his cans of beer and his favorite beef and onion sandwiches,. Bell told me that, on one particular Saturday afternoon, he was sat near the water’s edge on a small wooden stool that he always carried with him, when he was “literally frozen solid” by the sight of “what at first I thought was a big log floating down the cut, about sixty or seventy feet away.” According to Bell, however, it was no log; it was something else entirely. As it got closer, Bell was both astonished and horrified to see a large “dark brown and black-colored’ eel or snake-like creature – possibly ten feet in length or a little bit more – moving slowly in the water, with its head – that “looked like a black sheep” - flicking rapidly from side to side. 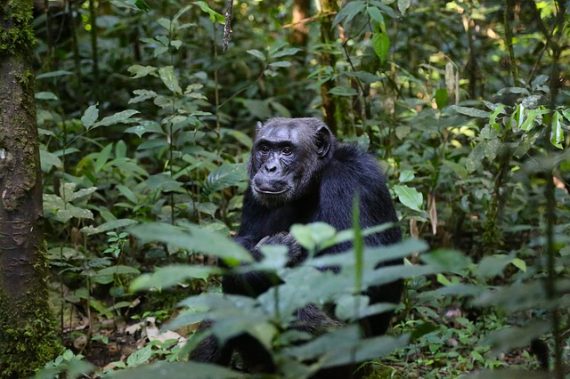 Although he had an old Polaroid camera with him, said Bell, he never even thought to take a photograph. Instead, he merely stared in both awe and shock as the animal cruised leisurely and blissfully past him, before finally vanishing out of sight. Bell stressed that the creature apparently did not see him (“or, if it did, it never attacked me”), and did not appear to exhibit any outright hostile tendencies. What elevated Bell’s story to a far stranger level was the fact that he claimed, in quite matter of fact fashion, that the following Saturday he was fishing in practically the same spot when he had a sudden, out of the blue feeling of being watched. He was not wrong. Peering across the width of the canal, Bell was both horrified and petrified to see a dark, hairy face staring intently at him out of the thick, green bushes. It was the Man-Monkey. The head of the animal was unmistakably human-like, said Bell, who added that “as soon as it saw me looking at it, up it went and ran right into the trees and I lost it.” He further explained: “That was it; a second or two was all at the most. But as it got up and ran I knew it was a big monkey. There’s nothing else it could have been."

The chances of two strange and unidentified creatures being seen in the same location, and only a week apart, are slim to absolute zero. In fact, we can forget the "slim" angle. The chances are 100 percent zero. My conclusion? That what Paul Bell saw was nothing less than a 1970s incarnation of an ancient Kelpie. Bell was lucky to leave the site alive.