This is the time when writers look back on their stories and try to pick out the best of the past year. There are some that jump right out, like the woman who altered her appearance to become a female Jack Sparrow impersonator, was then approached by a 300-year-old ghost who claimed to be the spirit of the real pirate who inspired the movie Sparrow, fell in love and married the ghost on a boat off the coast of Ireland in international waters where such events are legal. That would easily make most lists and be hard to top … but not impossible. It turns out the marriage was short-lived and Amanda Sparrow Large is now single again and has some advice for other women who have given up on men are looking for love in all the haunted places.

“I will explain all in due course but for now all I want to say is be VERY careful when dabbling in spirituality, it’s not something to mess with...”

Was he jealous of her fame as a movie character impersonator? Upset with his percentage of the fees she collected for appearances? Betrayed when she revealed she’s actually asexual? All of the above? Something else? 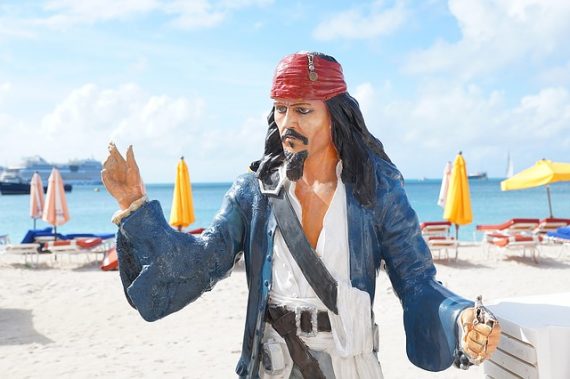 “It is well known that people often feel a spirit touch their hands, their face or their hair. The only difference with having a sexual relationship with a spirit is obviously that sense of touch goes a lot deeper. You can feel the weight of the spirit, their touch, the pressure. You can literally feel the physical act of what the spirit is doing to you, and the spirit can feel it too.”

Those were happier times when Amanda Sparrow Large Teague wrote those lines in her book, A Life You Will Remember. They may have first been inspired by Johnny Depp’s Jack Sparrow. Amanda saw “Pirates of the Caribbean: The Curse of the Black Pearl” and the sequels in 2015 and realized she wanted to be a female version of Captain Sparrow. Getting hired wasn’t enough – she spent 6,000 euros ($6,000 US) to change her name. That wasn’t money well spent because she soon was approached by a 300-year-old ghost named Jack who claimed he was the inspiration for the movie character (who Disney says was inspired by Keith Richards and cartoon skunk Pepe Le Pew – have I lost you yet?) and eventually had ghostly sex with Amanda. Being a good Irish girl, she decided she wanted to legalize things with a big wedding and did so in 2016 in international waters with Jack represented by a candle and a medium and her adult children present.

The story made the 2018 news because Amanda was promoting her novel-based-on-a-true-story. What’s she promoting now? The Irish Mirror, which interviewed her about the divorce, gives a possible cause.

“I always knew from a young age I was ‘different’. I grew up in a small village in Ireland and sexuality was taboo, anything that was not heterosexual was never discussed.”

She’s not talking about sex with ghosts but sex with nobody … she now lives in Belfast and announced in October she was asexual. Not that there’s anything wrong with that … although it could have an effect on how she portrays Jack Sparrow. Perhaps it’s time to lean more towards Pepe Le Pew.

"Zee cabbage does not run away from zee corn-beef."

"I am ze captain, and you are ze first mate. Promotions will follow quickly!"

"One nice thing eez, the game of love eez never called on account of darkness."

Is Amanda Sparrow Large Teague really a ghost lover/spouse/ex or just a shrewd promoter? Why did she say dabbling with spirituality is "nothing to mess with"? For now, only the ghost knows for sure.