A Look at Haunted Rome

The city of Rome, in Italy, is a place steeped in a long history going back through the mists of time, with countless trials and tribulations beyond the scope of one mere article. With all of this history, often bloody and violent, one might wonder if these streets and the ruins that dot them are in any way haunted, and the answer is yes, very. It might come as no surprise at all that Rome, with its immense and dark history should be inhabited by ghosts, and here we will look at a few of the more well-known such ghostly phenomena in this great historic city.

A lot of the ghostly phenomena pervading Rome come in the form of the numerous restless spirits that seem to roam its quaint historic streets. One of the more well-known of these is supposedly the spirit of who in life was known as Beatrice Centi (1577-1599), once a member of one of the most powerful noble families in the city. Centi was the daughter of an important aristocrat, Francesco Cenci, who she lived with along with her elder brother, Giacomo, in the city’s affluent Regola District. According to the lore, her father was quite the bastard, routinely abusing them, mistreating them, and generally acting like a complete jerk most of the time, and when she complained of this treatment he had Beatrice banished to the remote castle they kept in the countryside.

This was all enough to get the family plotting against him, and in 1598 they orchestrated a murder plot to get rid of the tyrant once and for all. One day when Francesco was at the castle they drugged him and drove a spike through his head, then dumping him from a high balcony in order to cover up the crime and make it seem as if he had leapt or fallen to his doom. Authorities were suspicious, and many of those involved, such as Beatrice’s lover, the estate's blacksmith, and even Beatrice herself were ruthlessly tortured for information. In the end, the entire family was sentenced to death, which proved to be an unpopular verdict in a city where most people knew what an abhorrent monster Francesco had been. They were nevertheless all horrifically executed by beheading at the Sant'Angelo Bridge in September of 1599, and it is at this bridge where the ghost of Beatrice is said to appear every year at the time of her death, always holding her head in her hands, and she is said to haunt the place where she grew up as well. She is also said to roam about the halls of the Castel Sant’Angelo itself.

There is also another persistent spirit in Rome, that of the the woman called Olimpia Maidalchini (1592-1657). She would eventually marry a prestigious and very rich man named, Pamphilio Pamphilj, who was the brother of the cardinal, who would later become pope Innocent X, and became a truly influential figure in Rome, known to most as Dame Olimpia, but she was not popular among the people. She even stole a cache of gold coins when she saw that the pope was on his way out, lying on his deathbed, and lost it all when Pope Innocent died and was replaced by pope Alexander VII, who had her exiled to the tiny village of San Martino al Cimino, which is where she would die of the plague not long after. It is said that she appears in a ghostly black carriage over the Sisto Bridge, perhaps forevermore.

Joining these ghostly ranks is the specter of the empress called Valeria Messalina, married to Emperor Claudius and known in the early 1st century as an insatiable, ravenous sex fiend. One famous legend is that she once challenged Rome’s most successful prostitute to see who could have sex with the most men in one night, and won. None of this went over well with her husband, who ended up having her executed for running off with her lover, Gaius Silius, who was also killed. The specter of Valeria is said to roam the Piazza Navona, harassing handsome young men and doing things such as hugging them or pinching their buttocks, ever the perv even in death. In the old Roman Jewish Ghetto there is also the supposed ghost of a woman named Julia Berenice, who in the 1st century was the daughter of King Herod Agrippa I. She married Emperor Titus in 65 AD, and for some reason in later years she ended up fleeing Rome to never return. Ever since her ghost is said to lurk within the Jewish ghetto of Porta Ottavia, nudging or pushing people and sometimes spectacularly appearing as an apparition.

Let’s not forget the ghost of none other than Nero himself, also known as Nero Claudius Caesar Augustus Germanicus Phantasma, and whose death has quite few legends attached to it. One is that upon his death he was buried at his family’s tomb on the Pincian Hill, right next to the Porta del Popolo. The location is already quite spooky enough as it is, long considered at one time to be a burial place for nefarious elements of society such as murderers, prostitutes, thieves, prisoners, and others who were not considered worthy of being buried on sacred ground. It is said that after his death the trees around the grave would become infested with crows, demons, and witches, among which Nero’s spirit could be seen cavorting about with and feasting with. This was so upsetting to many of the locals that in 1099 the tree was burned down on the order of Pope Pasquale II, a chapel built in its place to keep the ghost away, and with Nero’s grave dug up and unceremoniously dumped into the Tiber River. This does not seem to have been to his liking, as his ghost has been said to have relentlessly haunted the area ever since.

Some of the ghosts of Rome have their origins in more recent times, such as that of the 18th century occultist, healer, alchemist, and freemason Giuseppe Balsamo, also known as Count of Cagliostro. According to the tale, Balsamo regularly frequented a brothel on a secluded street called vicolo delle Grotte, and it was during once of his visits that he met his wife to be, Lorenza Feliciani, who he would marry in 1768. The two were apparently inseparable, that is until she turned him into authorities for committing all manner of crimes all over Europe, including witchcraft, fraud, sedition, and heresy, which if you know anything about the 18th century you will know they are all things that the era had absolutely no sense of humor about at all. Balsamo was lucky to get away with his life, although he did receive a life sentence to prison, cut short when he died four years later at the cold fortress of San Leo, where he was kept in a dim windowless room. To this day his forlorn and possible vengeful spirit can supposedly be seen wandering about the vicolo delle Grotte, often heard screaming out his wife’s name, either to be with her or out of fury for her betrayal, no one really knows.

Also from the 18th century is the story of the Marquis Luca de Marchetti, who according to legend exclaimed as he fell to his death from his palazzo’s window “I’ll be back!” He apparently didn’t lie, as his ghost is frequently seen jumping from the window or just wandering about the home in a daze, perhaps not even realizing he is dead. Even more recent is the headless spirits of the Italian revolutionaries Leonidas Montanari and Angelo Targhino, who were beheaded in 1825 and buried at a graveyard for society’s outcasts called “the Cemetery of the Hopeless,” that sits right up against the Pincian Hillside of the Villa Borghese park and along the road called Viale del Muro Torto, where they are said to still be seen walking about with their heads in their hands. Additionally Rome allegedly is home to the ghost of the great poet John Keats, who died in 1921 of tuberculosis and was buried at in the Protestant Cemetery of Rome. Keats’ ghost has been seen numerous times in the cemetery and the museum that stands nearby. There is also the ghost of King Umberto I, who was assassinated in 1900 and haunts the Piazza del Pantheon and the Italian Senate Building, as well as the surrounding streets.

In addition to roving ghosts and apparitions there are also whole areas of Rome that are allegedly intensely haunted, not least of which is the famous Coliseum, where thousands of gladiators and slaves met their violent and bloody demises for the macabre enjoyment of the crowd, and it was a popular place for public executions as well, claiming the lives of hundreds of thousands of individuals and various animals during its years of operation. Considering this very tragic and tumultuous history it is perhaps no surprise that the Roman Coliseum has had no shortage of reports of myriad paranormal phenomena. Among the various strangeness reported from here are disembodied screams, shouts, weeping, footsteps, and the ghostly sound of roaring animals, as well as shadowy apparitions of figures dressed in Roman clothing and roving cold spots that seem to descend out of nowhere, even in the middle of summer. Visitors have also reported being pushed, pulled, and nudged by unseen hands here. 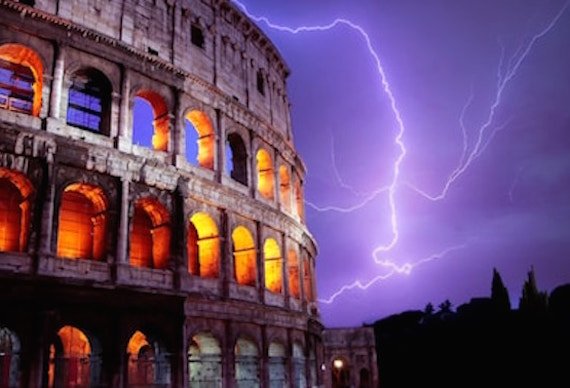 There are also the numerous catacombs that stretch for miles under the city, holding thousands of human remains, with some of them once exhibiting walls or archways made of up of skulls and bones. These gloomy, darkened halls stacked with coffins and bones might seem like the perfect places to be haunted, and they most definitely are, with apparitions, disembodied screams, and sudden bouts of terror often reported down in these dank depths. Particularly eerie and haunted is the Capuchin Bone Crypt, located beneath the Church of the Santa Maria della Concezione, with walls decorated with countless bones and around 4,000 skulls, as well as a spooky message written at the entrance that reads “What you are now, we once were; what we are now, you shall be.”

These are just a few of the more popular and well known ghost stories of Rome, but there are many more. In this historic city, with such a turbulent and often violent past, it sometimes seems as if every backstreet and old building has its own ghost story, and Rome is often considered to be one of the most intensely haunted cities in the world. So if you are ever in Rome walking along and taking in the sights, make sure to keep an eye out, because you never know when you might see a ghost.