A Secret Base: “Groom Mountain Area is Withdrawn”

Yesterday, I wrote an article titled "Area 51: 'I Can't Discuss It, Sir.'"  It was focused on how from 1984 to 1985 plans were initiated - and ultimately implemented - by the U.S. Government to grab as much land as possible around Area 51, Nevada. Today, I'm doing a follow-up to that article. Now, it’s time to take a look at a now-declassified document of 1987 titled Military Land Withdrawals. As was the case in the previous article, we see the Honorable John F. Seiberling taking the lead. Such are their importance, his words are presented without interruption:

“This morning we are resuming our hearings on H.R. 1790, introduced by our colleague from Maryland, Mrs. Byron. The bill is an omnibus measure, which would withdraw certain public lands in four different states for use by the Defense Department for military purposes. Under the Eagle Act of 1958, such military withdrawals involving tracts of 5,000 acres or more can be done only through an act of Congress.

“Our first hearing on this bill on November 14, 1985, focused on the so-called Bravo-20 range in northern Nevada, which the Navy has used for bombing practice and related training. Today’s hearing focuses on the other area in Nevada covered by H.R. 1790; namely, the Nellis Air Force Range complex in the southern part of the state. This is an area of more than 2.9 million acres divided into two portions, the north and south range, separated by lands which are now designated as the national test site and used primarily by the Department of Energy for underground nuclear testing and other purposes. The south range of the Nellis complex overlaps the western half of the Desert National Wildlife Refuge. That unit of the national wildlife refuge system is about 1.6 million acres in extent.

“Since 1974 there has been pending before the Congress an administration proposal to designate about 1.4 million acres within this unit as wilderness. Members of the subcommittee who served on the Public Lands and national Parks Subcommittee in the 98th Congress will recall that we considered the status of the Nellis range and related matters at a hearing on August 6, 1964. 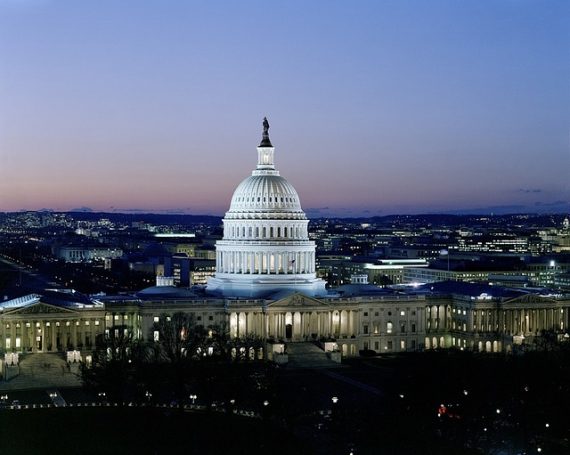 “By way of background let me recapitulate matters discussed at that hearing and some later developments. At the 1984 hearing we were presented with the issue of what some witnesses described as the seizure by the Air Force of more than 89,000 acres of public lands outside but adjacent to the Nellis south range. In fact, I will go further and say the illegal seizure by the Air Force of these public lands and the illegal exclusion of the rightful owners of various properties that were located on them or within them.

“Testimony from the administration demonstrated that in fact the Air Force had acted to close that large area, known as the Groom Mountain area, to public access even though the Air Force and Defense Department had no legal authority whatsoever to do so. They closed the area because of a decision which they testified was reached at the level of the Secretary of the Air Force or above – shades of Watergate. The decision was based on concerns that otherwise the security of the Nellis complex and the national test site would be threatened.

“After these actions, the administration asked the Congress to regularize matters by withdrawing the Groom Mountain area under the Engle Act. At the 1984 hearing also, we raised the matter pf the still pending administration proposal to designate as wilderness lands within the desert refuge and partly overlapped by the Neillis complex. In response to my initial questions, the Air Force testified that they had been consulted in the process of formulating the administration’s wilderness proposal and that they had no reason to object to such a designation. Based on this, the subcommittee was prepared to incorporate into the Nellis withdrawal legislation provisions designating wilderness within the desert refuge in accordance with the administration’s proposals. However, the Air Force and Defense Department then had an apparent change of mind and urged that such designation not be made. The Department of the Interior continued to support the wilderness recommendation.

“As a result of this apparent divergence of views within the administration, in the end we did not act on the Nellis complex as such. Instead, the Nellis withdrawal bill was amended to deal only with the Groom Mountain area. And that amended bill was ultimately passed by the House and agreed to by the Senate. It was signed on October 17, 1984, as Public Law 98-485.

“Under the terms of that law, the Groom Mountain area is withdrawn for military use until December 31, 1987. By January 1, 1987, the Interior and Air Force Departments must complete and issue an environmental impact statement concerning continued or renewed withdrawal of the Groom Mountain area. This environmental impact statement must address certain possible measures to mitigate development, and agriculture in Nevada.

“Strictly speaking, the questions of possible renewal of the withdrawal of the Groom Mountain area is not before us at this time. However, I think it appropriate for us to examine today the way Public Law 98-485 is being implemented, and where things stand in terms of the development of the required EIS and the consideration of mitigation measures. We will also be most interested to learn whether the former divergence of views within the administration has been resolved as regards the administration’s proposal for wilderness in the Desert National Wildlife Range.

“Finally, as I noted at our first hearing on the bill before us, it would be important for us to remember that while we have been to a certain extent attempting to examine the proposed withdrawal of the Nellis complex separately and apart from other areas in H.R. 1790, and, of course, apart from other proposed military withdrawals which are not dealt with by this bill, we must remember that, in fact, Nellis and the other proposed withdrawal areas are part of a larger picture.

“It would be a mistake to fail to consider the cumulative impact of the Nellis complex, the test site, and the other military withdrawals on the State of Nevada and other parts of the country affected by these withdrawals, as well as by other restrictions on the use of lands and airspace, in the interest of national defense or for other purposes.

“I want to thank you for holding this hearing on an issue that is of critical importance to the state of Nevada. I also want to welcome Congressman Reid to our committee, and extend a warm welcome to our Nevada constituents who have come to give their views on this to the committee. I look forward to hearing their testimony.

“As the chairman mentioned, this bill withdraws 2.945 million acres of land and park now in Lincoln County, NV, for use by the Department of the Air Force as the training and testing area. The Air Force has been under numerous Executive orders, public land orders, and administrative actions.

“The Nellis Air Force Range comprises the largest air and ground space available in the free world for peacetime military operations and training and, therefore, it is of extreme importance to the defense of this nation.

“It is important to note that this particular withdrawal does not represent any additional new lands to be withdrawn. During the 98th Congress hearings were held on this withdrawal, in addition to a proposal by the Air Force to withdraw 89,600 acres known as the Groom Mountain Range.

“It is expected that the final environmental impact statement on the Groom Mountain Range will be completed some time this summer. Since it is the intent of the Congress to consider the withdrawal of the Groom Mountain range only after the completion of the EIS, H.R. 1790 withdraws only the land on the existing Nellis range.

The next land grab went along smoothly.