A Tour of Haunted California Wineries

A premiere spot for internationally acclaimed wines are the rolling valleys and vineyards of the state of California, long considered a prime region for excellent wines. People come here from all over the world to take in the beautiful scenery, the peaceful atmosphere, enjoy the very often long history of some of the wineries, and of course to drink lots of wine. What many people don't know is that behind the charming architecture, the grapes, and the wine there are often mysterious forces at work, and some California wineries are considered to be some of the most haunted places in the state, offering some spirits of a different kind indeed.

Sitting within the wine country of Sonoma, California is a winery called Bartholomew Park Winery, and it is imbued with quite a colorful past that perhaps makes it unsurprising that it should be haunted. In its days before putting out fine wines, Bartholomew Park Winery underwent several metamorphoses, being used at one time or another as a women’s prison, a hospital, and a morgue, before becoming a vineyard and winery in the 1830s, after which it was acquired by European immigrant Agoston Haraszthy, who also happens to have been the owner of the equally haunted Buena Vista Winery, which we’ll get to later. It then became the Hacienda Cellars winery, with the wine cellars being right there in the old hospital, going on to become the Sonoma Valley Wine Museum and then the Bartholomew Park Winery in 1992.

This rather grim past came back to haunt the winery in the 1970s, perhaps literally, when the body of a former prisoner at the old prison was supposedly found buried within one of the walls of the establishment, and the main building and its basement are situated right atop what was once the morgue. Since the beginnings of the winery there have been tales of employees hearing disembodied voices singing or whispering, as well as moving objects, roving cold spots, footsteps when no one else is around, and the eerie sound of a piano playing. Most of the paranormal phenomena is concentrated within the area that was once used as the morgue and within its dank basement. If you are ever there for a wine tasting, be sure to keep your eyes and ears peeled for spirits of a different sort.

The same former owner also once owned the nearby Buena Vista Winery, also in Sonoma. Founded in 1857 by Agoston Haraszthy, who had brought grape seedlings over from Europe and was a key player in the growth of California wine. He also seems to have called this place his home in the afterlife, if reports are to be believed. You see, Haraszthy later moved down to Nicaragua, where it is said he met a rather brutal end when he was viciously mauled and eaten by alligators in a river there. Ever since, his apparition has been said to stalk the vast cellars of Buena Vista Winery, refusing to leave even in death. He doesn’t seem to be alone here either, as there have also been sightings of figures decked out in 19th century clothing, the spirit of General Vallejo, who had two daughters who married Haraszthy’s sons, and oddly the sounds of crying babies. The winery has been investigated by various paranormal groups, and all have come away with some tale of ghostly occurrences and EVP phenomena.

Next we come to California’s rustic Napa Valley, and the château-style winery known as the Beringer Estates, which also happens to be the oldest continually operating winery in the state. The locale itself is stunningly beautiful, and the architecture and general ambiance would not look out of place in the Bordeaux countryside in France, but what makes it really stand out is its hauntings, which mostly seem to gravitate towards a 17-room Victorian mansion on the estate called the Rhine House. Here one can find the living quarters of the winery’s founder, Frederick Beringer, who seems to still be hanging around. 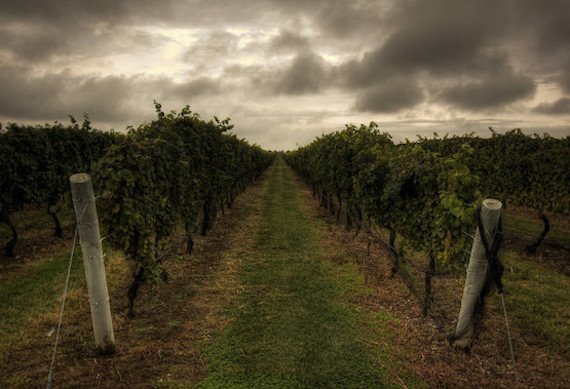 His old room is known to be host to all manner of explosive paranormal phenomena, such as objects flying across the room, furniture rudely pushed aside by unseen hands, and of course the apparition of Beringer himself. Objects also have a habit of going missing to turn up later all over the place in the house, and the whole house in general is ground zero for all manner of ghostly occurrences, such as lights turning off and on, things moving about, anomalous noises, and others, and this is not the only ghost haunting this area. In the late 1800s, Beringer and his co-founder and brother had a vast system of tunnels dug into the side of Spring Mountain for the purpose of storing their wine, and in the process their lack of safety precautions caused the deaths of a fair few Chinese immigrant workers, who are also said to eternally roam these perpetually dark corridors.

Next we have a winery that sits right up against a Pomo Indian Reservation in Healdsburg, California, in Sonoma County, known as the Dry Creek Vineyard. The site’s location may have something to do with the persistent paranormal phenomenon of the apparitions of figures dressed in traditional Native clothing wandering about, and there have been other oddities here as well. One report says that the manager of a tasting room at the winery once ignored the phone as it was ringing late at night, only to find later that the call had come from the number right there in the tasting room, even though no one else was there.

Phone shenanigans are not uncommon at all here, as cell phones will apparently either stop working or start ringing with no one on the other end. Doors also apparently open and close by themselves, lights flick on and off, electronics go haywire, and these incidents are so persistent that the Wine Institute has actually launched an investigation into it all. One of the most haunted locations at the winery is a place on the grounds called the Bullock House Vineyard, which supposedly harbors a haunted guest house that is so plagued by ghostly activity that it isn’t even open to visitors anymore, of which Dry Creek Vineyard’s director of marketing and communications, Bill Smart, has said:

We used the Bullock House to host trade visitors until 10 years ago or so. Several of those guests reported hearing creaking, footsteps and door-slamming at night. I haven’t experienced it, but enough people have that I believe there is paranormal activity there. 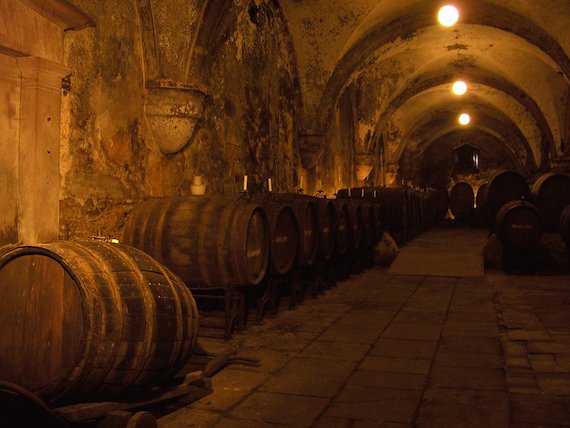 Moving on we come to Korbel Champagne Cellars, in Guerneville, California, which has since its founding in 1882 by the Korbel Brothers been home to a good range of weird happenings. The place is supposed to be teeming with ghosts, especially around a large house near the vineyards called the Santa Nella House, built by a Dr. Joseph Prosek and now used as a guest house for visitors, and which was also purportedly the scene of a suicide in the 1880s of a cook who killed himself in the attic here. Here there is supposedly an apparition of Prosek’s wife dressed all in black, an unidentified elderly man wearing a coat and top hat, another ghostly man who likes to hang out on the balcony and ring the doorbell, and even a ghost cat that allegedly leaves paw prints over sheets and on the carpet. The groundskeepers of the estate have also frequently reported mysterious orbs of light or shadow figures in the surrounding vineyards, and the house itself is so haunted that it served as the inspiration for the 2014 horror movie Altergeist, which was filmed there on location.

In Napa Valley we have the imminent Charles Krug Winery, in St. Helena, which is one of the oldest wineries in the state, established in 1861. Most of the ghostly tales of this place gravitate towards the quaint Redwood Cellar of the estate, built in 1872 and where even Krug himself is said to have seen ghosts. There is reportedly a whole cast of spirits who are seen here, such as a woman dressed in a floor-length, 1800s-era blue party dress with a satin bow, as well as ghostly children, and a woman in a white dress thought to be that of Krug’s own wife, Carolina Bale, as well as the laughter of a man, which has been heard to emanate from the dark shadows in the cellars. Why these spirits should congregate here is anyone’s guess, but it certanly is creepy.

Another rather old winery in Napa Valley is the esteemed Inglenook Winery, founded in 1879 by Finnish immigrant Gustave Niebaum, who was one of the first and most influential commercial winemakers in Napa Valley. It has a rather colorful history in that in 1975 a large portion of it was bought out by filmmaker Francis Ford Coppola, and he would acquire the whole thing in 1995, restoring it and renaming it Rubicon Estate Winery, although it would revert back to its former name in 2011. There are apparently three ghosts who inhabit this place. One is that of Niebaum himself, another said to be Niebaum's general manager, John Armstrong, and the third being Niebaum’s great grand-nephew, John Daniel, Jr., all of whom are alleged to merely creepily wander about and observe, usually vanishing into thin air when looked at too long or approached. 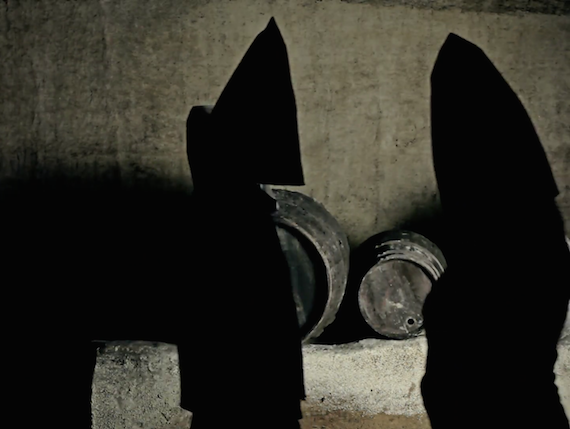 Finally we come to a place called Stag’s Leap Winery, built in 1888 by a Horace and Minnie Chase, and also one of California’s earliest wine estates. The main building, an intimidating structure forged of quarried rock, has at various times over the ages been a residence, a resort, a rooming house, a brothel, and a retreat for WWII navy personnel, and it has long been a haunt for gangsters and bootleggers in ages past. Among the many paranormal phenomena reported from this winery are doors that open and close by themselves, moving objects, things dropping from nowhere from the ceiling, and persistent sightings of a spectral woman dressed in period clothing, who is thought to have perhaps once been a prostitute from the winery’s bordello days. One persistent and very unique phenomenon reported from here is the tendency for acorns to suddenly drop from nowhere, especially in the manor house library room. Why is this? Why acorns? Who knows?

With its rustic vistas, quaint chateaus, long and colorful history, and plethora of high quality wines, California wine country is an excellent place to visit to get away from it all, and there is something here for everyone, even those who aren't particularly interested in wine. However, when you are sitting down to a glass for a tasting, be sure to keep an eye on the shadows, as you never quite know what is staring back.