A man found what looks to be an alien-like creature living inside one of the green plants in his aquarium. The man named Angus filled his aquarium with plants that he took from Lake Waikaremoana which is in North Island, New Zealand. It was about four weeks after he filled his tank with the plants that he noticed something odd swimming in one of them.

In a video that he posted to Reddit, the creature, which is about one centimeter long, is seen swaying inside of an egg. He asked people on Reddit, “Am I having an alien invasion? What do I do? Is it dangerous? No fish living in the tank. Only 5 snails.” He received an overwhelming response with over 500 people weighing in on what the creature may be. Some said it looked like a dragon fly or mantis, while others claimed it looked like a caddisfly, and some even suggested that it is a type of alien.

Click here to see pictures and the video of the alien-like creature.

There was another highly strange discovery in the waters of New Zealand recently. In November 2018, a woman discovered an odd looking skeletal sea creature while she was cleaning up garbage along Rakaia Huts beach after a big storm. The creature had spike-covered skin, a long head, two legs, and a tail.

The woman named Mary told Fox News, “When I pulled it out and saw all the teeth and barbs I was convinced it was a rare deep-sea creature. I was so excited because I love the ocean and its inhabitants. First I thought it was plastic sheeting. I pulled it out from underneath the sticks and it was a bit more than just a piece of plastic.” 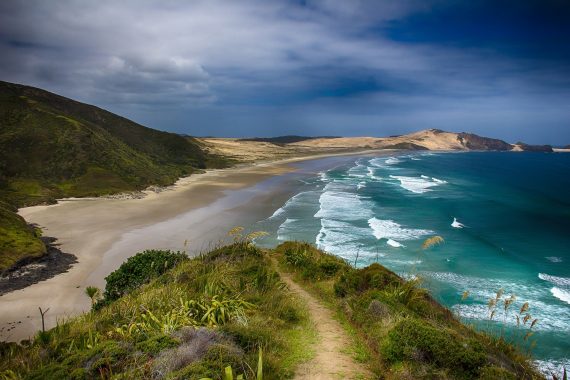 She went on to say, “My first thought was that it was something alien, but I was more fascinated than anything. I took it all the way home and gave it to a taxidermist next door to see if he knew what it was but he wasn’t too sure either. That’s why I thought I should reach out and see if anyone else knew what it is.” She posted the picture of the creature on Facebook and that’s when several people told her that it was a male Dipturus nasutus.

New Zealand seems to be a hot spot for alien-looking sea creatures, so it’s pretty exciting to wonder what the next alien-like discovery will be along the waters. It may a good idea, though, to leave the sea plants where they belong in the water or you may end up bringing an alien home with you.