According to newly conducted research, one of Earth’s oldest rocks may have been discovered on the Moon. The chunk of rock was initially brought back to Earth in 1971 from Apollo 14 astronauts who landed on the Moon.

The Earth rock ended up on the Moon more than likely because of a very powerful impact on our planet that happened approximately 4 billion years ago.

In a statement, David Kring, who is the co-author of the rock study, as well as a Universities Space Research Association (USRA) scientist at the Lunar and Planetary Institute in Houston, explained, “It is an extraordinary find that helps paint a better picture of early Earth and the bombardment that modified our planet during the dawn of life.”

Astronauts from the Apollo 14 mission explored the surface of the Moon for a few days in February of 1971 and that’s when they collected rock samples to bring back to our planet. The lunar samples were then studied by a research team which was led by Jeremy Bellucci from the Swedish Museum of Natural History, and Alexander Nemchin who is from the Swedish Museum and Curtin University in Australia.

Upon analysis, scientists discovered a small 0.08-ounce (or 2 grams) fragment on a rock that contained quartz, zircon, and feldspar, which are all rarely found on the moon but very common here on Earth. When they conducted chemical analysis on the fragment, they were able to find that it was crystallized in an environment which was oxidized and at a temperature that would have been the same as it was near the subsurface of the Earth in its very early days.

According to the evidence found in the study, the fragment was crystallized here on Earth between 4.1 billion and 4 billion years ago and at around 12 miles below the surface of our planet. It was then thrown into space by a strong impact and ended up on the Moon which was around three times closer to Earth than it is now.

Click here to see a picture of the lunar rock the astronauts brought back in 1971. 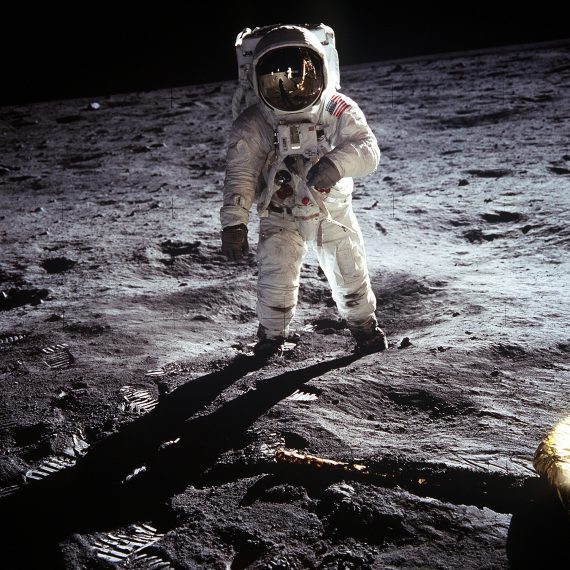 Researchers said that after the Earth rock landed on the Moon, some of it melted and was probably buried by an impact which happened around 3.9 billion years ago. It was then uncovered by another impact on the Moon about 26 million years ago which created the 1,115-foot-wide Cone Crater. That’s where two of the Apollo 14 astronauts (Alan Shepard and Edgar Mitchell) took some rock samples.