Fans of Anne Rice or Bram Stoker might disagree, but that’s what Texas vampire Logan South believes, which is why he embraces what he discovered about himself at age 15 and demonstrates by marrying a female vampire, having polyamorous relations with other vampires and drinking blood – although not in the quantities one might expect of the self-described King of the Vampire Court of Austin, Texas.

“The first time I ever drank blood, it was actually a really intense experience for me. (Sitting in English class, I felt this) intense thirst. I ran to the first water fountain I could find and I started gulping down water. I didn't feel any less thirsty. At that point, I happened to run into one of my friends in the hallway that had been helping me through my awakening. We found my friend and they pulled out a lancet and I drank from them and it was immediately gone.”

Now THAT sounds like the birth of a vampire. Daley South, the Queen of the Vampire Court, told her story on an episode of the We TV reality series “Extreme Love.” (See the clip here.) Daley definitely lives up to the traditional vampire reputation. She says she gets a headache from sunlight and spends less than an hour a week outdoors between dawn and dusk. Daley also wears fangs and had her ears surgically pointed.

On the other hand, King Logan seems to be in it for the sex. He apparently introduced the polyamorous (multiple partners) aspect to Daley and they now have a live-in lover and blood source named Ilona, who is referred to as “donor” to let everyone know that what she does is voluntary. And what she does is hold out a finger and let it get pricked with a finger pricker used by diabetics. That’s right, the King of the Vampire Court feeds by the drop – from a volunteer who gets tested every six months. To be fair, Ilona seems to enjoy it.

“There is a sense of a very sexual nature to it, you know, because it is someone taking you in.”

While Ilona sounds like she’s in it for the sex too, living with the King and Queen for a few drops of blood every month (that's how often they say they "feed") doesn’t sound too bad in general. Logan and Daley spent $120,000 on their royal wedding in 2017 and seem to be able to afford an extravagant, albeit nocturnal, royal lifestyle from what they make running or working at the Vampire Court (a private club for Austin vampires), Nocturnity (a nightclub and possible fetish/BDSM club) and Dead South Fangs (a fang-maker for vampires not born with them). 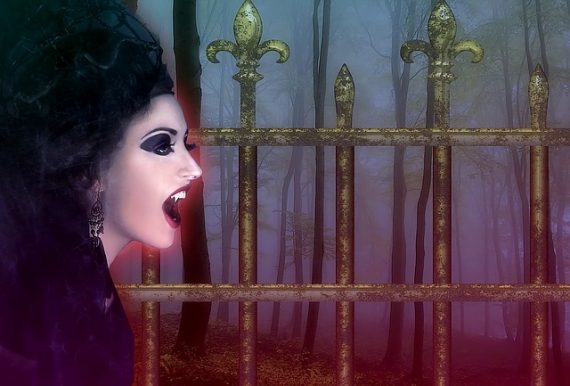 No one seems to have been harmed in the making of this vampiric episode of “Extreme Love” … unless you count the viewers being creeped out or vomiting a little in their throats. The real question is, does drinking drops of blood and cosplaying the part of King and Queen of the damned make you real vampires?

Does it at least win you the title of Most Extreme Lovers?