Bringing Out the Big Guns: 2019 and the Future of Super-Weaponry

2019 has just barely arrived, and the prospects for exciting technological innovations are already in the works, raising many questions, and a few fresh concerns for the New Year.

Many of the biggest achievements are coming out of the East, with news of China's Chang'e-4 lunar probe transmitting images of the far side of the moon. According to the China National Space Administration, the soft landing that facilitated this historic first occurred at 0226 GMT, Reuters reported.

This hasn't been China's only technological achievement in the New Year. The country's secretive Project WEM, believed to be a radio system for communications with submarines, remains mysterious even to those working on the project. However, among the most concerning developments coming out of the East in recent days has been the possible observation of a railgun, a weapon capable of firing hypersonic projectiles, spotted on board a Chinese Navy ship.

Australia's Broadcasting Corporation reported Wednesday that defense blogger Haohan-Red Shark posted a photo online of what appeared to be the Chinese Navy's Haiyang Shan, a Type 072II Yuting-class tank landing ship, with what appeared to be a railgun mounted on its stern. 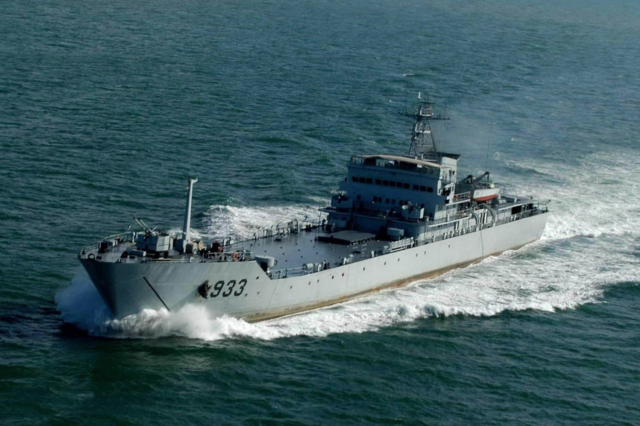 "Compared to conventional artillery that uses gunpowder or cordite to fire projectiles," the ABC reported, "a railgun uses a high-powered electric circuit to shoot a projectile along magnetic rails, firing at hypersonic speeds of Mach 5 or higher." The United States has reportedly pursued the construction of a functional railgun since the early 2000s, and its successful creation by the Chinese was confirmed by anonymous sources in 2011. The photograph (which can be seen here) is believed to be one of the first that depicts the weapon deployed for use in the field.

China's latest technological developments discussed here are not the country's only surprising achievements in recent months. Last year, China also managed to employ what Einstein famously called "spooky action at a distance" to achieve quantum communication with an experimental satellite.  Physicist Thomas Jennewein of the University of Waterloo in Canada was among many in the scientific community that called the experiment "a huge, major achievement," in a statement he gave to Science Mag. The experiment was undertaken by Jian-Wei Pan of China's University of Science and Technology in Shanghai, and the $100 million Quantum Experiments at Space Scale program. The European Space Agency, as well as Australian and U.S.-based studies, have all been working toward similar achievements in recent years.

So how has China so suddenly achieved technological supremacy? Since 2015, the International Monetary Fund has ranked them the leading economic superpower in the world, ousting previous leaders like the United States, and thus fueling current tensions under the Trump administration that have escalated to a trade war between the countries. However, China's succession to the international economic throne has roots that go back to the end to World War II. Following Japan's defeat, the potential for tensions between the country's Communist Party under Mao Zedong, and Chiang Kai-shek’s Kuomintang regime were allayed with the formation of a coalition government. During the 1960s, U.S. President Richard Nixon instituted a foreign policy shift that included direct meetings with his Secretary of State, Henry Kissinger, and Chinese Leadership; Nixon subsequently visited the country himself, engaging in diplomacy that would lead China out of the shadow of the Soviets, and into economic exchange that would eventually carry them to the forefront of the world economy.

The recent technological developments, in other words, are in large part the result of decades of economic growth and development, which not only places China on top of the world economy but also at the forefront of technological leadership. How this bodes for countries like the U.S. (which remains among China's chief rivals) is yet to be seen.

China's economic and technological growth over the decades is more complex than what is related here (as Nake Kamrany, Professor of Economics at the University of Southern California, illustrates in this 2015 HuffPo Op-Ed). More concerning, however, is that China is not only becoming the new economic and technological world leaders: they are leading in communication and, yes, weapons developments that could shift the balances between superpowers in the future. Add to this the promise of artificial intelligence--an eventuality which remains an intellectual event horizon for humanity at its current stage--and the likelihood that such technologies may be innovated by China, and the situation becomes even more complex and dire.

The arrival of a New Year always brings opportunities for reflection, and also anticipation for things to come: if these latest developments out of China are any indication, 2019 so far has certainly brought a number of considerations for technological developments, where they are heading, and of course, what countries and ideologies are undertaking them.

Welcome to the future, in other words.