In yet another example of the critters being on to us and planning their eventual uprising and takeover, there are reports from Italy of the massive invasion of a small town by what locals are describing as “crazed” white rats. What’s even scarier, the name of the town translates to “Little Cat.” Will they be heading for Colby, Wisconsin, Roquefort, France, and Cheddar, England, next?

“It is already the third evening in succession that you see hundreds of rats running along the Via Medri, many of which are hit by cars and killed. I have a feeling something happened, they seemed crazy, they bite and ate each other."

That’s the comment of the provincial councilor of Forlì-Cesena and municipal councilor in Cesenatico, Lina Amormino, made to MeteoWeb News about the situation is the small village of Gattolino. When the local politician in charge says something other than “Everything is under control,” you know things are “crazy.” How crazy? Authorities in the northern Italian province of Cesena, which Gattolino is a part of, organized a special task force of firefighters, police officers and sanitary inspectors and sent them to Gattolino to kill the rats, figure out where they came from, determine if they’re carrying diseases (duh – they’re rats!) and hopefully prevent any future outbreaks. And, if the locals don’t cooperate, they’re under orders to kidnap all of the town’s children. 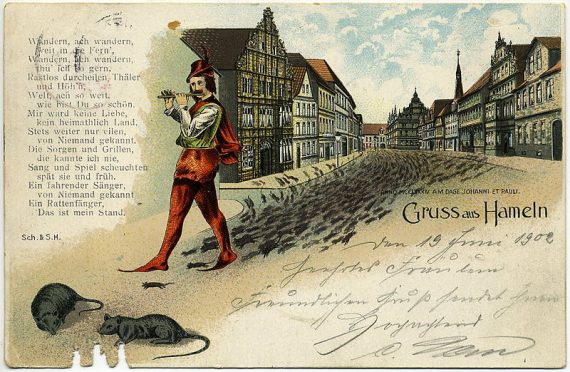 Just kidding about the kidnapping … although it apparently worked at least once in Hamelin. The majority of the rats are white and the fact that they’ve been running around everywhere (see a video here) in Little Cat city with no obvious fear or purpose since December 31st (no, it’s not a Year of the Rat revolution – that’s in 2020) is enough to dub them the “crazy white rats.”

“We had never seen such a scenario … When we arrived the road was invaded by rodents. We cleaned, carried out a road wash and removed the carcasses of the large dead rats that have been invested, which are more than one hundred and presumably will have to be examined by the AUSL."

When you hear a member of the special task force say something other than “Everything will be under control soon,” you know things are “crazy.” The AUSL is the Azienda Unità Sanitaria Locale, the local health authority. The task force initially removed 200 carcasses of rats that were already dead and then laid out 12 boxes of poisonous baits. You know things are “crazy” when a group calling itself "Friends of Animals" volunteers to help kill the “crazy white rats.”

“It is probable that in this area a large and numerous colony of mice was formed in a short time, who found shelter and food at will in a disused pigeon house.”

When chasing rats of the non-political kind, you follow not the money but the manure, and the droppings in this case led to a nearby abandoned pigeon-breeding house. The rats may have been attracted to whatever was left in the enclosure, which may have also been the cause of their insane behavior, says Lina Amormino.

“[Perhaps] they escaped because they were hit by an action of deratting or by 'disturbers', devices that are widespread today.”

Amormino is probably referring to the ultrasonic rodent repellent systems commonly seen as “humane” ways to drive rats out of your house … and into your neighbor’s. Is this a rodent version of ‘What doesn’t kill us makes us stronger’? Are the “crazy” rats really enhanced rats who have no fear of cars and are biting the wimpy ones who think they should head for the ditches? Should we all be a little worried?

Is "Little Cat" Gattolino rid of the big crazy white rats? Are they dead or merely relocating to Parma, Italy, for some Parmigiana? Are the children of Gallolino getting nervous? Does anyone hear a piper?