Remember in the movie “Back to the Future Part II” when Doc Brown upgraded the DeLorean time machine with a hover conversion package that enabled the car to flip its wheels, turn on its thrusters and fly? Elon Musk does.

“The new Roadster will actually do something like this.”

If it’s true, the line starts behind me for the flying Tesla Roadster which Musk teased about in a weekend tweet that showed an animated GIF (see it here) of the film’s DeLorean lifting off the ground under a date of “2022.” Is it possible? Well, if you can keep up with everything Elon has his fingers in, you know he’s CEO of SpaceX which has perfected the thrusters on its Falcon 9 rocket to safely and consistently land the rockets back on the ground for future use – the latest launch-and-landing occurred on Sunday. Can SpaceX engineers retrofit these thrusters onto a Roadster?

“Will use SpaceX cold gas thruster system with ultra high pressure air in a composite over-wrapped pressure vessel in place of the 2 rear seats.”

Musk somewhat answered that question in another tweet. The “SpaceX option package” will allegedly give the Roadster fantastic acceleration. When asked how fast it would get out of the blocks, Musk tweeted, “Vertically or horizontally?” That speed and hoverability will come from 10 small rocket thrusters surrounding the body with their placement dictating their functionality – from lifting to acceleration to cornering to braking.

How will the Tesla Roadster power the “SpaceX option package”? Rocket fuel? Musk says it will use straight electric power. That’s where the flying Roadster starts to fall. Even with Tesla’s advanced battery storage, the power requirements for flight, acceleration and braking would limit the air time to mere minutes and the space where extra batteries could be stored is already being used for the compressor. Would he consider an alternative? 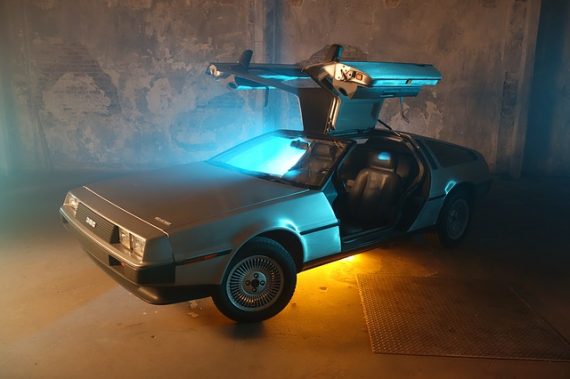 If you’re a fan of the Back to the Future series, you may remember that the original DeLorean time machine was electric but used gasoline to reach 88 mph and a plutonium-powered nuclear fission reactor (and in a pinch, a bolt of lightning) to power the flux capacitor. In the second film, Doc Brown replaced the plutonium reactor with a "Mr. Fusion Home Energy Reactor" which converted household waste into electrical power, most likely by cold fusion. However, it still needed the gas-powered combustion engine to reach 88 mph and the hover option’s necessary flying circuits were knocked out by a lightning strike.

Of course, cold fusion, flux capacitors and the Mr. Fusion Home Energy Reactor are currently theoretical … but, at a time not long ago, so were reusable rockets that return to the landing pad. The only people who seem to doubt Elon Musk are his competitors, the media and the stock market … and he’s proven all of them wrong in the past. Can he do it when he comes back to the future with a Flying Tesla Roadster?

Ask the Starman in the Space Tesla.

The Day of the Death Ray