Following the Money: A Look at the Practical Side of Government UFO Studies

With the recent FOIA release of a list provided to Congress pertaining to the controversial Advanced Aerospace Threat Identification Program (AATIP), there has been a lot of resulting buzz about wormholes, warp drives, and other futuristic concepts pertaining to advanced physics.

Steven Aftergood with the Federation of American Scientists was one of the recipients of the new disclosure, which he posted on the FAS website. In an interview with Motherboard, Aftergood expressed some surprise that the Defense Intelligence Agency would have provided so little financial backing for such disproportionately far-out projects. 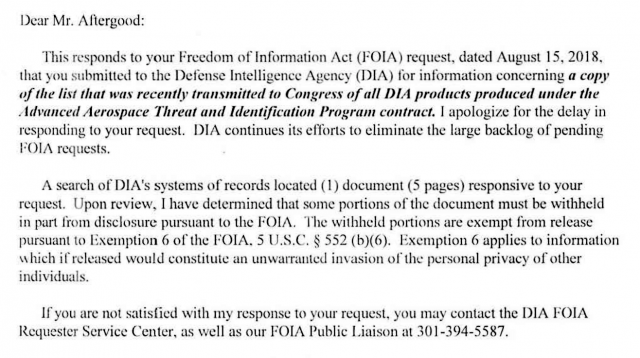 “I think anyone who looks at these titles will scratch their heads and wonder what on earth the Defense Intelligence Agency was thinking,” he said. “These are the kinds of topics you pursue when you have more money than you know what to do with.”

Most news outlets that have commented on the release have, as expected, gravitated toward its more sensational aspects. While there is little in the way of direct mention of UFOs in the small batch of documents, a number of physics papers and research studies pertaining to propulsion, cloaking, and other technologies are listed. One might presume such technologies—if they existed in ways that could be practically and efficiently implemented—would be required to account for some of the more compelling UFO observations spanning the last 75 years.

However, what few are talking about in relation to the little breadcrumbs that are finally beginning to appear in relation to AATIP is what it tells us not only about the scope of the program but also the motivations behind it… wherein there are a number of similarities to previous government UFO studies.

One minor detail—but an important one—is the inclusion of the word “and” between “Threat” and “Identification.” In other words, the implication of the new title as referenced by the DIA in their letter to Aftergood (Nick Pope and others received essentially identical FOIA information around the same time) entails Advanced Aerospace Threat AND Identification Program: hence, the objective is not so much “threat identification” as it is an assessment of aerospace-related threats and the identification of advanced aerospace technologies. Yes, it's a minor point, but one worth noting.

In terms of the financing side of the equation, as Aftergood noted, “These are the kinds of topics you pursue when you have more money than you know what to do with.” The paltry $22 million that was appropriated for the program hardly foots that kind of bill, although the reasons for its allocation are fairly evident. One aspect has to do with the fact that the Congressmen involved with the project—Harry Reid (D, Nevada), the late Ted Stevens (R, Alaska) and the late Daniel Inouye (D, Hawaii)—all had a history of allocating earmarks for their constituencies in their home states.

The other has to do with what the latest FOIA releases show: that the clear areas of focus of the “contract” (as it is referred to in the documents) are in technological areas which, presumably, may have applications for weapons systems or other advancements well outside mere threat assessment and identification of different varieties of “advanced aerospace.”

I recently spoke with Alejandro Rojas, a writer for Open Minds and arguably one of the more fact-oriented reporters on the UFO subject today, about the new releases. He shared my view that the practical side of government UFO studies—having to do with financial incentives and other advantages a government agency might hope to glean from such investigation—is something that is often under-emphasized, if not overlooked entirely in light of the more sensational implications of unidentified aircraft or other phenomena.

“First of all we live in a world where you’ve gotta make money,” Rojas says. “Any research or scientific research project out there has to have an end game that means profits. And it’s rare that you get research in areas that don’t have that.

“Sometimes government does need to step in for that reason: corporations don’t see that they can make a profit off of the medicine. We’ve seen this even in cancer research, where they think, ‘we’re not sure we can make money off of this medicine, even though it may help people.’ So the government has to step in to fund that sort of research because its gotta make money.”

Rojas and I also spoke about past government studies in relation to this, most notably the U.S. Air Force’s Project Blue Book, and how it contrasts with the present AATIP program and its apparent areas of focus.

“In Project Blue Book they said they were researching potential threats caused by UFOs, essentially, and they determined there was no threat posed by the phenomenon,” Rojas said. “Which is interesting in itself because it does seem that that’s true. I mean, even with the Nimitz situation (see the U.S.S. Nimitz Incident, as recounted by pilot Dave Fravor) they’re chasing something around, but in none of the Blue Book cases does a threat seem to be posed.”

Rojas, who has spoken in the past with Luis Elizando, former head of the Pentagon study associated with AATIP, notes that Elizondo describes the ideology of the AATIP program slightly differently from its earlier government predecessors; specifically, the threat angle seems to come into play more prominently.

"However, what Elizondo has done is something different—and I don’t know if it’s him, or maybe Harry Reid and the group, you know, this was what they were doing—but Elizondo is very quick to point out… that anything unidentified constitutes a threat. Potentially, at least from their perspective, they have to consider every unknown a threat until we know otherwise. And I think that ideology is important because Blue Book closed when they determined this unidentified ‘whatever’ doesn’t seem to pose a threat. Elizondo is saying, ‘no, if you’re saying it’s unidentified, then by its nature it’s still a threat, from our perspective."

"So it’s kind of justifying why we have to continue, even though Blue Book already happened. Blue Book determined arguably that there was unidentified craft… so what [Elizondo] is saying is that we can’t stop there--that if they’re unidentified, then we still need to consider them a threat, and that justifies us looking further into all of this."

"There is a difference between the two programs in that manner," Rojas concludes, underscoring the necessity for practical results from government UFO studies which seems to remain. "[AATIP] is more actively looking to produce some science or some potential other benefits in developing weapons from these identifications."

Within this context, the AATIP program may be seen with at least some degree of greater clarity than before. It is a "contract", as the recent DIA papers phrase it, which secured a limited amount of funding on behalf of Senators from three states based on a mutual interest they shared (and in the case of Harry Reid, which he shared with certain friends and constituents, namely Robert Bigelow). However, in order to obtain earmarks for such a program, its focus, as outlined in the recent DIA documents, clearly seems to have objectives which may have hope for producing scientific, strategic, or other incentives in the long term. The result appears to be a program that explores more practical areas of development and national security interest while facilitating some justification for the study of "unknowns" along the way, and on a budget that would have been considered pretty modest even decades ago.

None of this undermines the scope or objectives of the AATIP program, per se, although it is perhaps worthwhile to consider some of the details we have begun to glean about it that have less to do with its sensational elements and the mysterious phenomena associated with it.